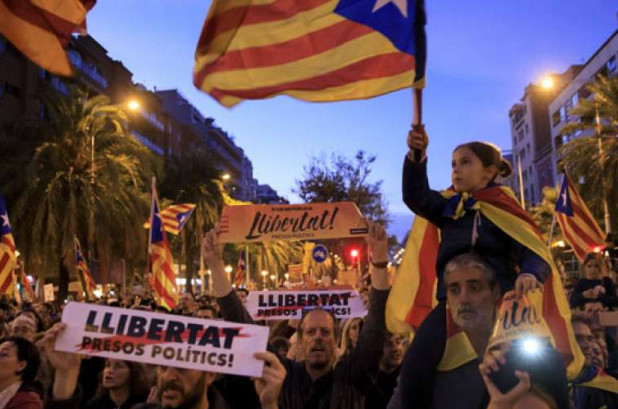 ‘Freedom For The Political Prisoners’: March In Barcelona

An estimated 750,000 people marched in Barcelona on Saturday to demand that the Spanish government release Catalan separatist leaders who are being held in prison for their roles in the region’s recent independence referendum.

“Wearing yellow ribbons on their lapels to signify support, they filled the length of the Avenue Marina that runs from the beach to Barcelona’s iconic Sagrada Familia church, while the jailed leaders’ families made speeches,” The Independent reports. “Catalonia’s two main grassroots independence groups called the march, under the slogan ‘Freedom for the political prisoners,’ after their leaders were remanded in custody on charges of sedition last month.”

The march on Saturday followed a series of related demonstrations in recent weeks. On October 16, “around 200,000 people (according to calculations by the municipal police) came out to protest the jailing of the heads of the pro-independence ANC and Òmnium associations, Jordi Sànchez and Jordi Cuixart,” the Spanish newspaper El Pais reports. “On October 21, another protest calling for their release saw 450,000 people take to the streets of the Catalan capital.”

In early October, the Spanish government mobilized a violent police force in hopes of quashing a regional independence referendum, but the movement for Catalan independence and subsequent actions by the Spanish central government in Madrid have left the wealthy region deeply divided. Those who were able to cast ballots last month overwhelmingly supported independence.

Since regional leaders defied Madrid and declared independence in late October, Spanish Prime Minister Mariano Rajoy has imposed direct rule on the region. Rajoy has fired all of Catalan’s government officials, dissolved its parliament, and set a new election for next month. “We must reclaim Catalonia from the havoc of separatism,” Rajoy declared at a campaign event Sunday, according to the BBC.

The Spanish High Court has jailed a group of former government officials and leaders of two grassroots groups. On Thursday, the government released five of the those who had been imprisoned, though former Catalan parliament speaker Carme Forcadell reportedly struck a deal that effectively bars her from advocating for independence during December’s election. The court has also issued warrants for the region’s former president Carles Puigdemont, a supporter of Catalan independence who fled to Brussels with four other former government officials.

Puigdemont, according to El Pais, sent a video message to Saturday’s protest to urge citizens to remain “very active” and reassure them that those who have been jailed will hear the “clamor” of the people.

“Let’s not let ourselves be frightened or constrained by those who want to impose the law of [Article] 155,” Puigdemont reportedly said, referencing the clause of the Spanish Constitution that Madrid has used to fire the entire Catalan government and impose direct rule in the region. “The Spanish state cannot carry on like this,” he said. “The European community must stop looking the other way.”