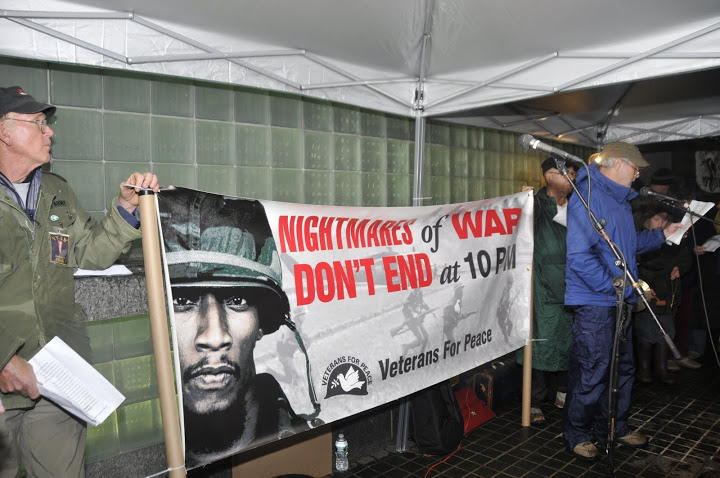 Freedom of Assembly on Trial in NYC

The fourth day in the trial of 12 veterans and their allies arrested at New York’s Vietnam Veterans Memorial Plaza last Oct. 7 began with an unusual expert witness.

The trial hinges on claims by the defendants that their actions—staying in a city park past closing time—constituted protected First Amendment activities, and that the government must show a “significant interest” to override those protections. At the time of their arrests, the veterans and their allies were reading the names of dead U.S. soldiers from Viet Nam, Iraq and Afghanistan and laying flowers in vases to commemorate the 11th anniversary of the war in Afghanistan.

The first witness for the defense July 11 was Achva Benzinberg Stein, a professor of landscape architecture and urban planning at the City College of New York. Her testimony revolved around the nature of the city park known as Vietnam Veterans Memorial Plaza. “The memorial is one thing,” she said, “the space is another. The space is a large street bounded on two sides by buildings. … It’s a walkthrough space.” By characterizing the area where the defendants were arrested this way, defense attorney Jonathan Wallace of the National Lawyers Guild hopes to convince Judge Robert Mandelbaum that the park, a large open plaza between South and Water Streets that is used at all hours as a pedestrian thoroughfare, could not be considered closed merely because a park ordinance declared it so. He compared it to a legislative body that voted to make the mathematical constant pi equal to 3.14 because the rest of the numbers after the decimal point were too much trouble. The actual value of pi is not changed by this legislation, Wallace pointed out.

Other defense witnesses included Jules Orkin, a veteran who said he was at the plaza that night “to affirm that I had a legal right to be there. Because it was the start of the 11th year of war in Afghanistan, it was an appropriate place to be at the time,” he said, addressing prosecution claims that participants could have stopped the ceremony at park closing time and continued their reading the following day.

Dr. Margaret Flowers testified that she had learned through her work as a congressional fellow for Physicians for a National Health Plan that our system of government is broken and no longer serves the people—making it more critical than ever to push back against increasing encroachments on constitutional rights of assembly and freedom of speech. “Just as the medical-industrial complex writes the laws so that they profit, and the result is human suffering and death, the military-industrial complex influences the lawmaking process and the cost is also human suffering and death.”

When asked if she had come to the park intending to provoke a confrontation with police and be arrested, she said, “My intention on that day was to bring attention to the horror of the military-industrial complex and to give law enforcement the opportunity to uphold our First Amendment rights.”

Viet Nam veteran Sam Adams also said he had not come to the park intending to be arrested. In fact, he was in the process of complying with the order to leave the park, but after having walked through the memorial and reflecting on the many friends he had lost in Viet Nam, “I thought that my leaving the park, leaving what I was doing, reading the names of the dead, was doing them a disservice and I did not want to walk away from that.”

Adams’ testimony supported the defendants’ contention that the park curfew of 10 pm is only enforced in order to shut down assembly and free speech. The lieutenant on the scene told him as he was being arrested, “We’re all vets too; we really don’t want to do this, but Occupy Wall Street really screwed this up for you guys. You have them to thank for this.” On the previous day, organizer Tarak Kauff had noted that Captain Nicole Papamichaels of the First Precinct had offered to stretch the 10 pm closing time for the veterans, but said she could not let them stay all night because it would set a bad example for the Occupy movement.

“I wanted to hear the names of those who had died,” said Beverly Rice, a 76-year-old grandmother of 16, “the poetry and the demonstration of love for them, and the pain that the vets have for all of this.” She spoke of waiting to hear one name in particular, that of a young man she had helped care for when in a foster home while growing up. She never heard what she was waiting for–the ceremony was stopped by police before readers reached the name Robert Dorner.

The last defendant to testify was 86-year-old decorated World War II veteran Jay Wenk, a member of the Woodstock town council. His role at the ceremony was to sound a gong for every ten names that were read. “I believed I was tolling a bell, something you do at a funeral. It’s a mournful sound, and it is a mark of respect.” When asked why he stayed when ordered by police to leave the park, he said, “I had not finished my memorial for the people whose lives were torn out of their bodies in wartime.” He wanted “to honor those who had had their lives ripped from them and to remind the public that this is what happens to people in the military during wartime.”

After the defense testimony, the court heard from Jeanne Mirer, a member of the NLG’s International Committee and the first woman president of the International Association of Democratic Lawyers. She urged Judge Mandelbaum to take into consideration obligations under the International Covenant for Civil and Political Rights, which the U.S. Senate ratified in 1992. The judge had ruled earlier that the treaty, which guarantees free speech rights, did not trump the U.S. Supreme Court’s interpretation of allowable “time, place, and manner” restrictions on the First Amendment. Mirer noted that this was the first time the treaty argument had been presented in the context of a criminal case. Despite her detailed presentation explaining how the two standards should be used in conjunction, not in competition, Judge Mandelbaum declined to change his earlier decision.

Toward the end of the day, the defense began closing statements, beginning with an extensive discussion by Wallace of the First Amendment issues raised by the case and the question of whether the park was indeed closed. Three of the other National Lawyers Guild attorneys on the case—Patricia Wright, Diane Brody and Martin Leahy—also spoke. Wright noted that everyone in this country grew up reciting the Pledge of Allegiance and believing in its promise of “liberty and justice for all.” Pointing to the increasing restrictions on dissent in this country, she said “Shame on the NYPD!” for arresting people in the process of asserting their freedom of expression. Leahy pointed out multiple discrepancies in the prosecution’s case, including witnesses’ inability to even define the boundaries of the park in question. Brody said it had been an honor to work for clients who were so dedicated to protecting constitutional rights for all that they put themselves at risk of going to jail.

Tomorrow will open with a final closing statement from the remaining National Lawyers Guild attorney on the case, Martin Stolar, followed by a rebuttal from the prosecution. Judge Mandelbaum will then deliver a verdict. If convicted, many of the defendants have said they will refuse to pay any fines or do community service, preferring to serve jail time rather than acknowledge that their actions were in any way criminal.

Supporters can attend the final day of the trial beginning at 10 am, at 100 Centre Street, Room 535.