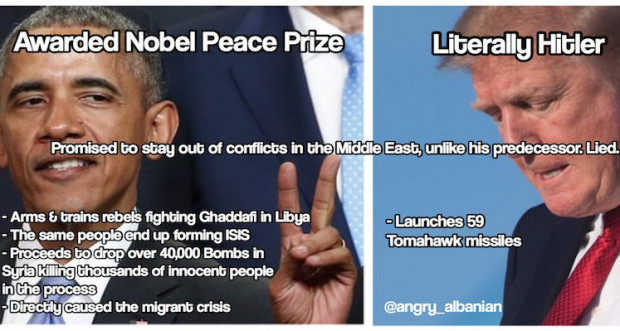 “The war against Yemen began in 2015, with a stamp of approval and military assistance from the Obama administration.”

Barack Obama was not the lesser evil president. He was always the more effective evil. The ruling classes were in desperate need of a new and attractive face to complete their ugly agenda. George W. Bush and the Republicans were reviled and thus no longer capable of bringing imperialist plots to fruition. They were bad for the brand and were shown the door for use at a later date.

Obama certainly didn’t disappoint his patrons. He claimed that America was exceptional and indispensable and that no other nation had rights that it need respect. He succeeded in making some neocon dreams come true as he tried to bring the Project for a New American Century to reality. He destroyed Libya, supported a coup against an elected government in Ukraine and attempted regime change in Syria too.

Blood was shed and lives were upended all over the world under the Obama doctrine of American rights to global hegemony. But the corporate media and most Democrats said nothing. Now that Trump is in office the evil doing that Obama began is suddenly brought to light.

In 2016 reports emerged that African migrants were being enslaved in Libya. This columnist wrote about the atrocity here in Black Agenda Report but most of the American corporate media didn’t find the story newsworthy.

“Obama destroyed Libya, supported a coup against an elected government in Ukraine and attempted regime change in Syria too.”

The Saudi genocidal war against Yemen also got the silent treatment. The war crime began in 2015, with a stamp of approval and military assistance from the Obama administration. Saudi Arabia was also the number one partner in crime in the assaults on Libya and Syria.

Democrats in Congress went along in support of the mass killing. If they had any objections they largely kept them to themselves. Now Libya and Yemen are in the news and not because any of the appeasers really care. These very important issues are being used to get Trump, who inherited the crime spree from President Hope and Change.

Black Agenda Report and international media revealed the horror visited upon African migrants in Libya ever since that country was targeted by the United States and NATO in 2011. Saudi Arabia has been killing Yemenis for two years. Now even Obama administration officials such as former United Nations ambassador Samantha Power express phony horror and shock regarding policies they helped bring about. “The United States should have long ago ended support for a Saudi-led coalition that, in addition to killing thousands of civilians thru air strikes, is now starving people. Enough is enough.” Power thinks or at least hopes that the rest of the world has amnesia when she posts on twitter.

The turmoil among the Saudi ruling family and their closeness to president Trump are now making life easier for the hitherto silent. Of course they are as concerned now as they were in the past, which is to say not at all. But now they have a target and his name is Donald Trump. They are using war crimes to get to him, just in case Russiagate doesn’t do the job.

There is certainly collusion going on but it isn’t between Trump and Putin. It is between the elites in the media and the Democratic Party who are trying to accomplish what they failed to do with voters and what they fail to do as their plans unravel around the world.

Barack Obama’s untouchability continues even as his human rights violations are revealed. His name is rarely connected to the catastrophes he unleashed. His friends still cover for him and leave his name off the perpetrators list despite the fact that he was at the top of the criminal gang.

“Obama’s name is rarely connected to the catastrophes he unleashed.”

The CBS news program 60 Minutes demonstrated how the subterfuge is carried out. They finally covered the starvation and cholera epidemic ravaging Yemen but didn’t mention how the United States military abetted the crime. They also threw in lies and blamed Iran for the suffering but that country is uninvolved. Iran is actually a continual target of the Saudis, but that easily provable information is too inconvenient to be revealed by CBS.

It is a good thing that the world knows about the enslaved migrants in Libya. It is good that Saudi Arabia’s crime against Yemen is now getting attention. But none of the criminals should be let off the hook. Barack Obama, his secretaries of state Hillary Clinton and John Kerry and all of NATO have blood on their hands. That fact should not be forgotten and must always be at the forefront of discussion and action.