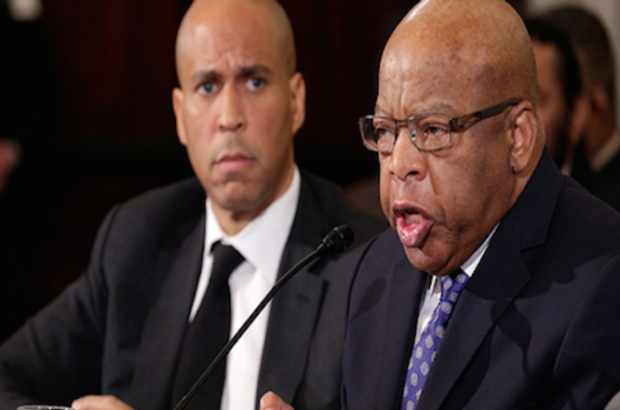 Any “resistance” to Trump that allies itself with Democrats, is futile. The Democrats are “unprincipled scoundrels” who “have no desire to move away from their corporate sugar daddies.” If the same people that now declare themselves foes of Trumpism “spend time wondering if they should back Cory ‘the hooker’ Booker or Elizabeth Warren in 2020, or ponder who should run the Democratic National Committee, they aren’t resisting anything.”

“This is a moment to reject the duopoly and fight for something completely new.”

Resistance is the new watch word for millions of people who oppose Donald Trump and his administration. This is a positive development against a president who made such open appeals to white American supremacy and the 21st century iterations of manifest destiny.

His announcement of a travel ban directed at citizens of seven mostly Muslim nations rekindled outrage and denunciation from millions of people around the country. Those protests were righteous and needed to take place. What they did not need was the presence of Democratic politicians who are still committed to imperialism and neoliberalism and to their failed policies which brought Trump to the presidency. It is the Democrats who must be resisted first. If not this nascent movement will be just the latest in a long line of failure for the left. The left must create the political crisis necessary to end not just Trumpism but all of the isms that are ruining the lives of millions of people.

Democratic Senate leader Charles Schumer shed tears for stranded refugees but fully supported the invasion and occupation of Iraq, one of the nations targeted by the travel ban. Schumer is also one of the key spokespersons for Israel’s occupation of Palestine and endless massacres in Gaza. Cory Booker is an opportunist and a corporate hooker who also quickly stepped into that spotlight. Elizabeth Warren may ask tough questions at confirmation hearings, but invariable votes to approve Trump’s nominees. They and their colleagues can always be counted on to approve of American imperialism.

“The left must create the political crisis necessary to end not just Trumpism but all of the isms that are ruining the lives of millions of people.”

The debacle that brought Trump to the presidency has been moving in slow motion for years. It was just a matter of time before the Democrats would lose this office as they had done with the House, the Senate, and most state legislatures. They have no desire to move away from their corporate sugar daddies, instead preferring to devolve into pretense, which was obvious to the voters who wouldn’t stand with Hillary Clinton.

The unprincipled scoundrels of that party have done everything except take responsibility for years of treachery. They did nothing to fight against the gerrymandering which gave the Republicans safe seats all over the country. They didn’t care about Republican triumphs in Wisconsin which made the country safe for union busting. They don’t care about the anti-abortion laws that have been passed in state after state. The only way to fight what they claim they don’t want would be to engage and energize their voters, but they have no interest in doing that. Their modus operandi is inherently hostile to the interests of the masses. The Democrats were content to hold the presidency and make deals with Republicans and fool people into thinking they had done their best.

“Democrats are not on the left and they can’t be trusted to bring about the fundamental changes needed at this critical time in history.”

They continue to make excuses for Hillary Clinton’s defeat while simultaneously pushing anti-Russian propaganda. They ratchet up the call for war while also diverting attention from their own failures. Trump is no better as he engages in threats against China and Iran. Trump can’t peel Russia away from its alliance with those countries. They are allied precisely because of American aggression and they won’t be fooled by the newest criminal in the White House. The Democrats and Republicans may continue to wreak havoc around the world, but none of their mad dreams will come to fruition.

They all must be rejected. It may be true that Trump will pass national right to work legislation but the Democrats made that possible. They could have passed card check and made it easier for workers to organize. They could have raised the minimum wage. They didn’t do what Democrats wanted them to do and have legitimized all of Trump’s plans that they now say would be so terrible.

“Their modus operandi is inherently hostile to the interests of the masses.”

There can be no resistance to Trump which includes the Democratic Party. The Democrats are the obstacle to justice at home and peace abroad. Democrats are not on the left and they can’t be trusted to bring about the fundamental changes needed at this critical time in history.

This is no time for fear or pandering to discredited lesser evilism. This is not the time to discuss which of the Democrats is the best candidate for 2020. This is a moment to reject the duopoly and fight for something completely new.

Words like resistance are powerful and fulfill the human need to think well of oneself. But they are also dangerous for the same reason. At this moment everyone wants to think they are resisting because they wear a pink hat or protest a travel ban at the airport. But if these same people spend time wondering if they should back Cory Booker of Elizabeth Warren in 2020 or ponder who should run the Democratic National Committee they aren’t resisting anything. Booker and Warren don’t oppose imperialism or the carceral state and they don’t really want to fight the Republicans that badly. That is because both wings of the duopoly are on the same team. If both aren’t resisted the people will continue to be crushed. The only question is whether Democrats or Republicans will do the crushing.