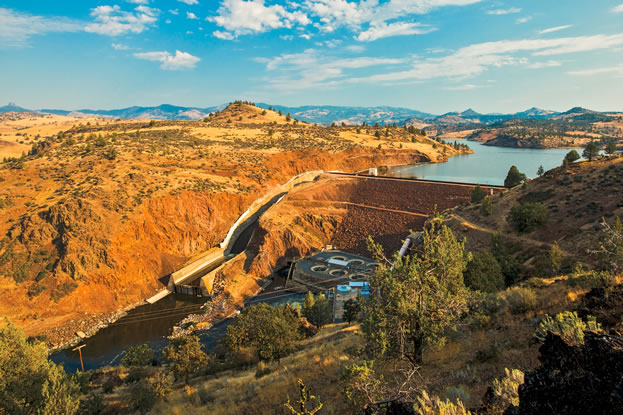 Above photo: Photo by Matt Stoecker The Iron Gate Dam on the Klamath River is one of four dams planned for removal under the new agreement in principle.

Water rights issues remain to be resolved in largest dam removal project ever in the US.

Northwestern United States – After more than a decade of negotiating, and waiting, and negotiating again, it looks like four dams on the lower Klamath River may finally be removed. On February 2, a coalition of state governments, the US Department of the Interior, and dam-owner PacifiCorp reached a tentative agreement to demolish the dams, which are located in Oregon and Northern California. The group has set February 29 as the target date for signing the “agreement in principle.”

The new agreement in principle comes after years of congressional delay on an earlier set of agreements, which addressed not only dam demolition, but also water allocation and habitat restoration along the Klamath. It charts a new path for demolition — one that doesn’t require federal legislation. Instead, parties to the agreement will pursue implementation through the Federal Energy Regulatory Commission’s (FERC) administrative process. If all goes as planned, the dams will likely be brought down in 2020 in what will be the largest dam removal project to date in the United States.

Demolition will be a boon for river water quality — the four dams create warm, stagnant pools of water along the river, which, along with agricultural runoff, facilitate toxic algae blooms. The removal project will also open 250 miles of potential fish spawning and rearing habitat to Chinook salmon and steelhead.

“Removal of the lower four Klamath River dams would be the single greatest salmon restoration action in US history,” Leaf Hillman, a Karuk tribal member and director of the Karuk Department of Natural Resources, said in a statement.

The earlier package of Klamath agreements, which were negotiated in 2010 and 2014 before languishing in Congress, were the product of years of collaboration and negotiation among farmers, tribes, environmentalists, and other local stakeholders. The agreements, taken together, attempted to address decades of tension over water resources in the basin that came to a head in the early 2000s.

Because the agreement in principle does not address the restoration or water rights components included in the earlier set of Klamath agreements, some of those who were active in the negotiation process were left with mixed emotions regarding the new deal.

“It’s good that the dam removal is moving forward, we’re excited about that,” says Curtis Knight, executive director of California Trout, an organization that was actively involved in the earlier negotiating process. “But to really achieve our goals and objectives of a healthy Klamath River, basin wide, and healthy communities, we think the components of that package… eventually need to move forward.”

Secretary of the Interior Sally Jewel echoed this sentiment in a statement, describing the new plan as “an important initial step as we work toward a comprehensive set of actions to advance the long term progress and sustainability for these tribes, fisheries and water users across the Klamath Basin.”

The cost of the demolition project will be covered by allocations in California’s 2014 water bond, as well as by PacifiCorp. According to Knight, PacifiCorp ratepayers have for several years been paying a small surcharge, which is being kept in a trust for the project.

PacifiCorp, for it’s part, is motivated to proceed with dam removal. The private utility was facing costly retrofits to provide passage for salmon, steelhead, and other fish. The costs of retrofitting the dams were estimated to be higher than the cost of dam removal.

The amended agreement isn’t a done deal — it must still be signed, and then approved by FERC. But after working on the earlier set of Klamath agreements for years, Knight, at least, is hopeful that the removal plans will proceed. “I’m optimistic,” he said. “You have a motivated utility, you have money in the bank, and I think there is a pathway to do it.”