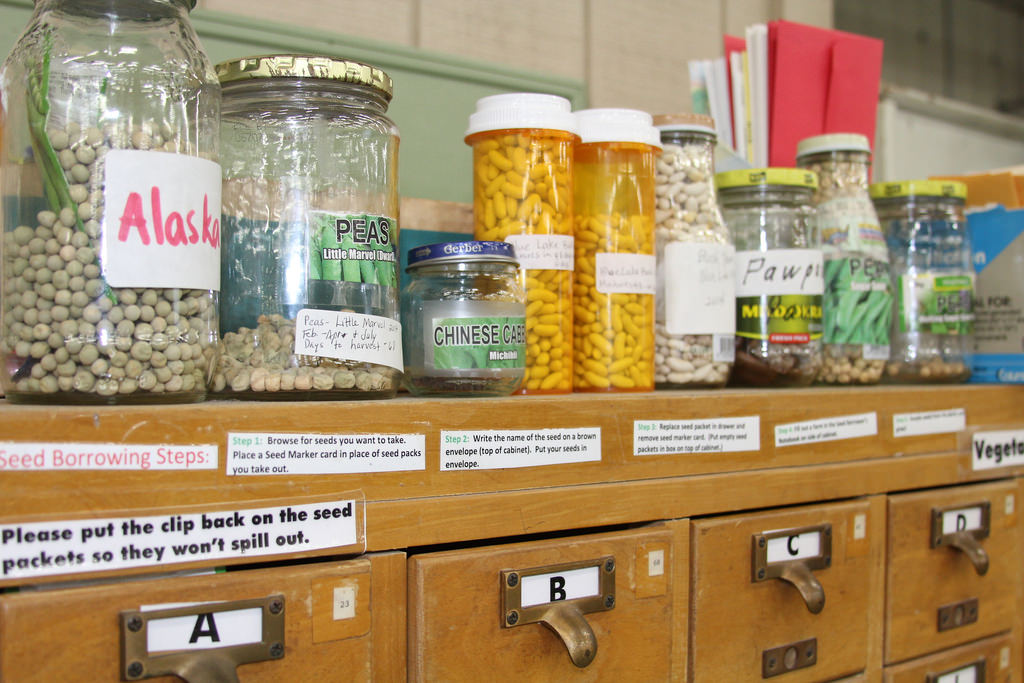 Above Photo: A seed sharing station at the University of Georgia’s Carrol County Extension Program office. Photo by Sharon Dowdy.

A little-known irony about Thomas Jefferson and his agrarian ideal: successful farm ownership during his presidency was entirely dependent on seed sharing.

There were no Stokes Seeds catalogues for early US immigrants. Settlers used what they brought with them from the Old Country or what they acquired through trade with others. But this was a new land, with a different climate and soils. Many of those early crops failed as the seed proved ill-suited for the realities of their new home.

Affluent landowners pooled their resources to overcome these hurdles, importing seed and adapting it to the New World’s environment. These seed saving and sharing networks were called “societies.” Seed did not become widely available to farmers, other than through their personal networks, until 1819. In that year, the secretary of the treasury called upon all US ambassadors and military officers stationed overseas to collect seed from their posts and bring it back so it could be shared freely. This officially became the responsibility of the US Patent Office in 1839, after the commissioner of patents, Henry Ellsworth, secured funding from Congress to collect and distribute agricultural seed and statistics.

How was this facilitated? The US Postal Service. Ten years in, the program was distributing 60,000 packages of seed annually. By 1855, the millionth seed parcel had been sent. The US Department of Agriculture took up the practice with its formation in 1862. This was one of the agency’s early charges: the procurement, propagation, and distribution of plant varieties for the nation’s farmers. By the end of the century, the agency was shipping approximately 1 billion free packages of seed annually.

There were seed companies during the 1800s, such as Stokes Seeds, which started in 1881. But most seed businesses were short lived. The fact that the seed reproduced itself meant companies had little incentive to invest in increasing a plant’s vigor or yield, given that it could be replicated for free. Once an improvement was made, and the seed sold, everyone had access to it. Try getting rich off that business model. The American Seed Trade Association was founded in 1883. After decades of lobbying, the group was able to convince Congress to end the free seed program in 1924. It is no coincidence that around that time the first hybrid seed entered the market: hybrid corn.

Hybrid corn outperformed traditional varieties by 100 percent, with yields in the early twenty-first century 400 times greater than those reported in the 1930s. Its seed also came with an added benefit, from the industry’s perspective, at least. Hybrid corn’s progeny never achieved the same yields as did the parent plant. This made the innovation a boon to seed companies. Farmers could have saved the seed if they wanted to. But why? The money saved would have been more than offset by the money lost at market. Farmers using second-generation hybrid seed could expect yields lower than those of crops from traditional seed varieties. (They could have tried to produce their own hybrid seed, but the formulas have always been a trade secret.) This marks the start of the commercialization of the seed industry, now one of the most concentrated sectors of the entire conventional foodscape.

We have come a long way since the days of free seed programs and seed societies. Post offices have disappeared from the seed sharing landscape. Yet, another community pillar is now opening up seed “ownership” to everyone. The library. As libraries around the country expand their collections to include e-books, digitized audio media, and online video streaming materials, many are also making available to patrons some of the oldest technology of all: seed. Until recently, the checkout procedure at seed libraries looked something like this: you selected seed to take home, grew them, harvested the fruits, and made sure to return some seed from your harvest to the library. That was pretty standard procedure until a number of seed libraries across the nation were served with cease and desist letters. Turns out that process is illegal in certain states. Yes, in some states you can legally buy and grow marijuana, but if you hope to start up a seed sharing library, be prepared to have state agents knocking on your door.

The most unsettling case that I know of occurred in 2014, when the Pennsylvania Department of Agriculture informed a seed library that it was breaking a law — the state’s Seed Act of 2004. The seed library, its officials were told, fell under the definition of a “seed distributor,” which meant it needed to start acting like one. It was required to meet stringent labeling requirements. The labels needed to be in English and had to clearly state the plant’s species name or commonly accepted name. For hybrid varieties, the label needed to state whether the seed had been treated. Finally, labels were required to include the name and address of the seed sharing entity. As a seed distributor, the library was also told it must conduct germination and purity analyses. The process was quite a bit different from the way the library was used to handling things, when seed was treated like books. Some seed samples were bought, others donated. Once seed was obtained, the library slapped a bar code on it and sat it on a shelf.

Seed acts are generally well intentioned. At one level, they protect consumers from unscrupulous seed vendors — thus the laws are both well intentioned and needed in exchanges motivated centrally by a desire for profit. Yet that does not describe the circumstances surrounding, or motivations underlying, seed libraries. Their seed is not for sale, and exchanges are not commercial. Instead, behaviors are governed by norms rooted in trust, reciprocity, and empathy. This is a far cry from the dog-eat-dog corporate world, where shareholder happiness and market share are priorities number one and two.

Back in Pennsylvania, tensions flared when the Cumberland County commissioner, Barbara Cross (her identity is a matter of public record), found a way to drop the t-bomb into the conversation. “Agri-terrorism is a very, very real scenario,” she was quoted as saying in an interview, adding, “You’ve got agri-tourism on one side and agri-terrorism on the other.” As you could imagine, being identified as potential terrorists did not go over well among the activists trying to make seed saving and sharing legal in the state.

The seed library was eventually allowed to remain open, after it was agreed that gardeners would not be required to bring seed back to the library. Stipulating that patrons must return seed would have made the loan a transaction, technically speaking, not a giveaway.

Where, then, does the library get its seed, if not from the community? The seed provided must be commercially packaged. Not exactly a fairy-tale ending, I know. To their credit, officials of the Pennsylvania Department of Agriculture did tell library officials that they could host seed swap events and still remain in compliance with the 2004 Seed Act, thus creating opportunities for real seed sharing. The Pennsylvania case is but one of many dealing with seed libraries. Others had more hopeful resolutions.

In September 2016, Assembly Bill 1810 was signed into law in California. The bill, known among seed saving activists as the Seed Exchange Democracy Act, amends the “seed law” chapter of the state’s Food and Agricultural Code to exempt seed libraries from burdensome testing and labeling requirements.

Marvin, a self-described “seed sharing activist, gardener, and attorney,” helped craft AB 1810. Like others I spoke with in the seed library movement (my term, but those involved seemed to like it), Marvin was quick to point out that seed sharers are “as far from being agri-terrorists as one can be.” He continued, crescendoing until the final word, which came out in a falsetto, “This has everything to do with increasing biodiversity and reducing food insecurity, and yet people have the gall to call us terrorists?”

With that, he grabbed the laptop on his desk and slid it toward himself. He typed for a few seconds before turning the screen to face me. “Critics of seed libraries need to be honest with who they’re really looking to protect,” he said, back in his normal baritone, while pointing at the screen. I was being shown a legal document. Across the top, in a fancy calligraphy font, were the words “In The Supreme Court of the United States.” I was looking at a legal brief, filed by twenty-one different agriculture industry organizations, for the 2013 Supreme Court caseBowman v. Monsanto Co.

It was a US Supreme Court decision in which the Court unanimously affirmed the decision that the patent exhaustion doctrine does not give farmers the right to plant and grow saved patented seed without the patent owner’s consent. “Look here.” Marvin was pointing at the screen. “It reads, and I quote, ‘Early seed breeders had little incentive to make costly investments in developing more productive plants because the free seed program crowded private breeders from the marketplace.’” With that, he slammed the laptop shut. “That’s what we’re up against, the idea that seed sharing of any sort cuts into their precious market share. Seed companies don’t care about improving food security. They’re just looking after their bottom line.”

With more than 300 seed lending libraries in existence in the United States, the subject of their legality is starting to be scrutinized by state authorities. “As with anything,” Marvin told me, “the government generally doesn’t bother with enforcement if there’s only a few random cases here and there. Now that seed libraries are becoming a thing, a movement, agencies are beginning to take notice. They’re not flying under the radar anymore.”

Fortunately, activists have a lot of models to draw from as they challenge the idea that seed lending libraries are the legal equivalent to seed distributors. The recently passed California law follows similar laws passed in Minnesota, Nebraska, and Illinois, all in a matter of eighteen months. In North Carolina, seed libraries are legal thanks to a blanket seed sharing exemption that applies to all nonprofits. Alabama has on the books an exemption for anybody who sells up to $3,000 worth of seed, which means you are even allowed to sell a small quantity of seed if you want.

With the end of our interview in sight, I asked Marvin to sum up the main takeaway from his experiences: a background that ranged from helping to get AB 1810 passed to consulting with seed activists in other states. He had obviously given the topic some thought, because while he answered immediately, what he said had an equal mix of lament and bite to it. “To think seed libraries are essentially illegal in some parts of this country tells you something about what our priorities are. We’re a nation built on seed sharing. But we’ve moved so far in the other direction.”

Frustrated, Marvin clenched both hands into a fist until his knuckles turned white. He continued: “When we create laws, we don’t think about how they impact sharing because sharing is now so far from our minds and from what we do. That’s not right.”