Some 30% of flights to and from Paris were cancelled while only 40% of high-speed TGV trains were running Thursday amid a strike action against labour reforms. Independent estimates by French media put the number of protesters in Paris at 47,800.

Tens of thousands of protesters rallied in the streets of France on Thursday and strikes caused travel misery for millions in a showdown between trade unions and President Emmanuel Macron that could be decisive for his reform efforts.

Seven unions representing staff in the public sector had called for strikes and protests on Thursday, while a third of railway workers walked out to join the demonstrations against 40-year-old Macron’s bid to shake up the French state.

The strikes meant that less than half of the country’s high-speed TGV trains were running, while flights, schools, daycare centres, libraries and other public services such as garbage collection were disturbed to varying degrees.

Police fired teargas and water cannon in central Paris during sporadic clashes between security forces and groups of students which appeared to have been infiltrated by far-left anarchists.

At least one office window was smashed, police said, and a car had been set on fire.

But while commuters faced problems in some areas, particularly in the suburbs of Paris, and many parents were forced to find last-minute childcare solutions, the turnout at the protests and the severity of the strikes appeared low by historic French standards.

“The real question for today is how many people are going to join the action?” hard-left leader Jean-Luc Melenchon told reporters in Paris as he arrived with other leftist political leaders, including the incoming head of the Socialist party Olivier Faure.

March 22 had been chosen deliberately to echo the start of student protests in 1968 that led to a crippling strike that paralysed the country and culminated in notorious street battles between police and demonstrators in May of that year.

On Thursday, protests in major cities such as Marseille and Lyon saw around 10,000 people and rail unions claimed around 25,000 took part in Paris, but the numbers were smaller than previous demonstrations against labour reforms rammed through by Macron last year.

The centrist leader was reported to have told advisors in private this week that he was feeling “serene” as Thursday approached, adding that the day of strikes was “not a cause for panic”, according to the investigative newspaper Le Canard Enchaine.

Public opinion is largely behind his bid to remove some of the pension privileges and job guarantees for new employees hired by the railways, while his bid to shake-up the civil service and education system were announced during his election campaign last year.

Thursday’s strikes were the start of possibly months of protests against Macron after rail unions announced stoppages on two days out of every five between the beginning of April and June.

“For the unions, the objective today was to convey the sense that there is anger rising around the country,” Chloe Morin from the left-wing Jean-Jaures Foundation told AFP, adding that the success of their confrontation with Macron “will depend on their ability to mobilise people and get public opinion behind them.”

France’s once fearsome unions have regularly forced governments into policy U-turns in the past, but Macron and his ministers have vowed not to yield and Morin said she saw little reason to believe the government would change course.

Thousands of public servants had already staged a one-day strike in October against Macron’s plans to cut 120,000 jobs over his five-year term, as well as a pay freeze and a plan for more outsourcing and voluntary buyouts that unions say will remove job security.

Roughly a third of flights into and out of three Paris airports — Charles de Gaulle, Orly and Beauvais — were cancelled because of a strike by air traffic controllers.

The SNCF said that 35.4 percent of employees were on strike, meaning just two of every five high-speed TGV trains were running Thursday, and half of regional trains across France had been cancelled.

Four Eurostar trains between London and Paris were cancelled, as were about a quarter of the trains serving other foreign destinations. 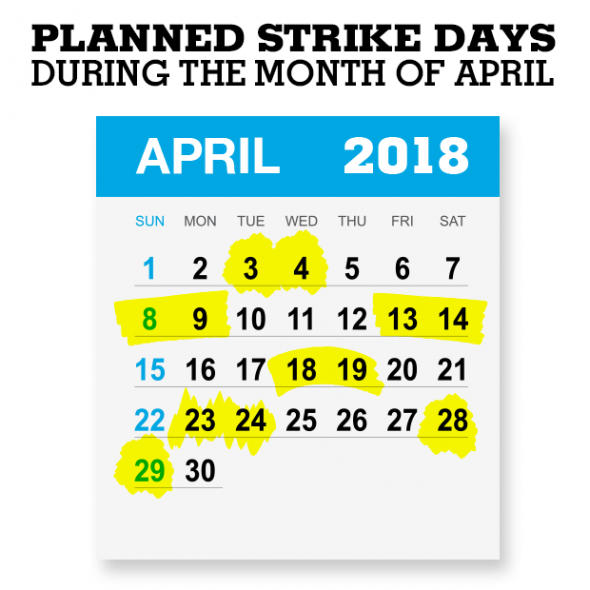 A quarter of teachers were striking on average across France, according to the largest SNUipp-FSU union, with up to 55 percent not heading into schools in the Seine-Saint-Denis region just north of Paris.

Macron has vowed to press ahead with what he has promised will be a “transformation” of France to make it more business-friendly and less dependent on government spending and debt.

His approval rating is at 37 percent, according to a survey by the Ipsos polling group published Wednesday, with 55 percent holding a negative view of his presidency — the highest level since the start of his term last year.

A separate survey on Thursday by the Elabe group showed that 58 percent of respondents thought he was implementing his programme but 74 percent throught it was unfair.