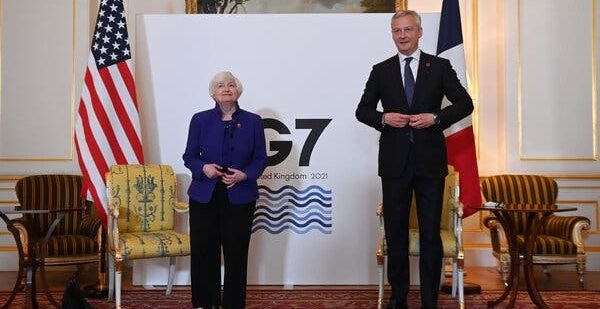 Above photo: Treasury Secretary Janet Yellen and Mr. Le Maire at a meeting of Group of 7 finance ministers in London in June. Hollie Adams.

“Clear Differences Remain Between France and the U.S, French Minister Says,” is the headline to a remarkable  piece appearing in the New York Times.  The Minister, Bruno Le Maire, is brutally frank on the nature of the differences as the quotations below Illustrate.  (Emphases in the quotations are jvw’s.) In fact, they amount to a Declaration of Independence of France and EU from the U.S.

It is not surprising that the differences relate to China after the brouhaha over the sale of U.S. nuclear submarines to Australia and the surprising (to the French) cancellation of contracts with France for submarines.  Mr. LeMaire, sounding very much like a reproving parent, characterized this as “misbehavior from the U.S. administration.”

Mr. LeMaire made it crystal clear that the disagreement over submarines is symptomatic of deeper differences in world view that have emerged not only in France but in the EU as a consequence of China’s rise.  The article states:

“‘The United States wants to confront China. The European Union wants to engage China,’ Mr. Le Maire, a close ally of President Emmanuel Macron of France, said in a wide-ranging interview ahead of the (IMF) meetings. This was natural, he added, because the United States is the world’s leading power and does not ‘want China to become in a few years or in a few decades the first superpower in the world.

“The key question now for the European Union, he said, is to become ‘independent from the United States, able to defend its own interests, whether economic or strategic interests.’”

LeMaire might have pre-ambled that statement with: “When in the course of human events, it becomes necessary for one people to dissolve the political bonds which have connected them with another, and to assume among the powers of the earth, the separate and equal station to which the Laws of Nature and of Nature’s God entitle them, a decent respect to the opinions of mankind requires that they should declare the causes which impel them to the separation.”

Still, seasoned diplomat that Mr. LeMaire is, he provided some cold comfort to the naughty U.S. administration, saying, the United States remains “our closest partner” in terms of values, economic model, respect for the rule of law, and embrace of freedom.  But with China, he said, “we do not share the same values or economic model.”

“Asked if differences over China meant inevitable divergence between the United States and Europe, Mr. Le Maire said, ‘It could be if we are not cautious.’ But every effort should be made to avoid this, which means ‘recognizing Europe as one of the three superpowers in the world for the 21st century,’ alongside the United States and China.”

“One of the biggest lingering points of contention is over metal tariffs that former President Donald J. Trump imposed globally in 2018. Officials face difficult negotiations in coming weeks. Europeans plan to impose retaliatory tariffs on a range of U.S. products as of Dec. 1, unless Mr. Biden pulls back a 25 percent duty on European steel and a 10 percent tax on aluminum.

“‘If we want to improve the bilateral economic relationship between the continents, the first step must be for the United States to lift the sanctions in the steel and aluminum  case,’ Mr. Le Maire said. ‘We are fed up with the trade wars,’ he added.”

Shared values are nice, but shared profits are clearly better.