French Yellow Vests Rally In May Day Protests Amid Teargas

Above Photo: Tear gas floats around masked protesters during clashes before the start of the traditional May Day labour union march in Paris, France, May 1, 2019. | Photo: Reuters

Police and protesters clashed on May Day in Paris. Police fired teargas on protesters, some of whom threw rocks.

Labor unions and “yellow vest” protesters were on the streets across France just days after Macron outlined policy proposals including tax cuts worth around 5 billion euros (US$5.58 billion).

More than 7,400 police were deployed in Paris, Global News reported. Riot police used tear gas to disperse a group of protesters that had converged at the front of the traditional May Day union march, a Reuters witness said. Some protesters responded by throwing projectiles at the police.

French police had warned Tuesday of possible May Day clashes with far-left anarchist groups, known as Black Blocs, after calls on social media for radicals to hit the streets. 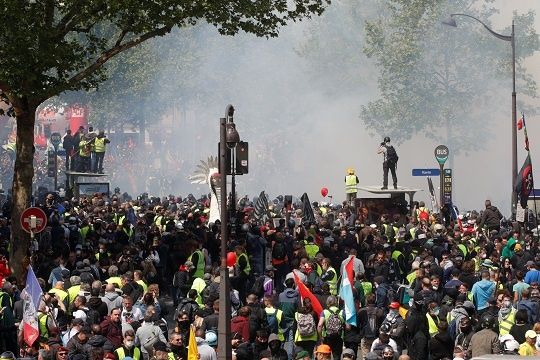 People including protesters wearing yellow vests gather before the start of the traditional May Day labor union march in Paris, France, May 1, 2019. | Source: Reuters

Authorities said they expected some 2,000 Black Bloc protesters from France and across Europe to turn up on the sidelines of the traditional May Day union rallies. Police had already arrested 88 people on Wednesday morning.

As of mid-April, 38 so-called yellow vests had been wounded to upper limbs, including 5 lost hands, 52 wounds to lower limbs, and 189 head wounds including 20 people who have lost an eye.

Macron promised a constitutional reform to facilitate a “differentiated” decentralization and a greater ctitizen’s participation in public affairs. He also vowed that no more schools or hospitals will be closed “without the majority’s agreement” until 2022.

The “yellow vest” protests, named after motorists’ high-visibility jackets, began in November over fuel tax increases but have evolved into a mainly peaceful, but sometimes violent revolt against politicians and a government they see as out of touch with the working and middle classes.

Many in the grassroots movement, which lacks a leadership structure, have said Macron’s proposals do not go far enough and most of his announced policies lack details.