Above photo: Summer, 2016 at the South Corean embassy in Washington, DC. By Popular Resistance.

Washington, DC – Earlier this year, Popular Resistance took action in solidarity with a peace delegation from South Corea* that represents activists who are working to end the crackdown on progressive political parties and free speech, to free activists who are in prison and to end the Korean War. We demonstrated at the White House and at the Korean embassy. We learned about the May 18th Democracy Uprising in 1980 in which hundreds were killed. And we learned that the current president, Park Geun-hye, the daughter of the dictator Park Chung-hee who ruled in the 1970’s, banned the Unified Progressive Party in violation of international law and has violated other rights.

Here is a quote from a report on the abuses by the Park Geun-hye administration:

The consequences of her rule have been devastating for the great majority of Koreans.  Some highlights: her deregulation of health and safety standards led directly to the sinking of a ferry carrying over 400 students; more than 300 of whom drowned.  Her labor initiatives include laws to increase the precariousness of work and difficulty of unionization, and lower the wages of regular workers.  Her education policies require that public school teachers use only state written history books.  Her militarist policies include the construction of a new naval base for US warships on Jeju island, over the objections of the residents; an intensification of war games directed against North Korea; the closure of the Kaesong industrial zone; and the welcoming of a US THAAD anti-missile battery aimed at China and Russia on South Korean soil.  And she has advanced her policies by outlawing demonstrations, arresting hundreds of union leaders, and dissolving a political party. 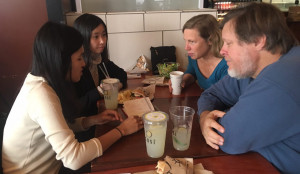 We met with the Corean peace delegation again this week for an update on their actions. South Corea has reached an amazing turning point due to the efforts of many people, including our friends. They have created a new progressive party, the People’s Democratic Party (PDP), and with other progressive and labor activists, they have organized massive demonstrations in Seoul and throughout South Corea that are having a profound impact.

They are hopeful that President Park Geun-hye will step down and that they will form a more progressive government.

Our Corean friends report that 11 members of their group have been arrested for violating the National Security Law (NSL). Although four members were released, seven members are still in prison, including the spokesperson of PDP.

The  NSL was enacted on Dec.1, 1948. Its origin is the Maintenance of the Public Order Act which had been applied under Japanese Colonial Rule. It had persecuted Corean resistance against Japan. It is still alive as NSL violating human rights and democracy. Last Dec.1, three comrades who were wanted rushed the U.S. embassy to call on abolition of the NSL and withdrawal of all U.S. troops from Corea.

There were two huge demonstrations this year with a million people and finally last Saturday 2 million people attended a demonstration in Corea. The mass of people demand Park Geun-hye’s immediate resignation.
A solidarity action will take place this Friday, Dec. 2 in front of the White House (Lafayette Square side) at noon with the following demands: 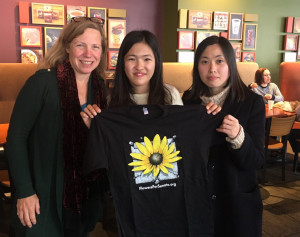 This is an exciting time for democracy in South Corea. We have much to learn from these brave activists. Please come out and support them if you can. And if you are not able, then please send them well wishes. Email us at info@popularresistance.org and we will forward your messages.

*Activists from Korea spell it with a “C” because that is the original spelling when it was a unified country.