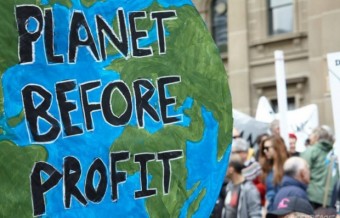 Friends Of The Earth: Paris Climate Deal Is A Sham

History will not be made in the convention centre, but on the streets of Paris and round the globe

“Rich countries have moved the goal posts so far that we are left with a sham of a deal in Paris. Through piecemeal pledges and bullying tactics, rich countries have pushed through a very bad deal,” said Sara Shaw, Friends of the Earth International climate justice and energy coordinator.

A detailed policy analysis of the Paris Agreement will be available at http://www.foei.org/what-we-do/paris

“Despite the hype, the Paris agreement will fail to deliver. Politicians say it is a fair and ambitious deal – yet it is the complete opposite. People are being deceived,” said Dipti Bhatnagar, Friends of the Earth International climate justice and energy coordinator.

“Vulnerable and affected people deserve better than this failed agreement; they are the ones who feel the worst impacts of our politicians’ failure to take tough enough action,’” she added.

Rich countries must make their fair share of emissions cuts and provide finance and support to developing countries to help them adapt to the impacts of climate change, according to Friends of the Earth International. Instead, they are failing to cut carbon emissions and the finance they have offered is insufficient.

According to Friends of the Earth International three major problems stem from the Paris talks:

– The draft Paris deal states that 2 C is the maximum acceptable global temperature increase, and that countries should pursue efforts to limit the temperature increase to 1.5 °C. This is meaningless without requiring rich countries to cut their emissions drastically and provide finance in line with their fair share, and places the extra burden on developing countries. To avoid runaway climate we need to urgently and drastically cut emissions, not just put it off.

– Without compensation for irreparable damage, the most vulnerable countries will be left to pick up the pieces and foot the bill for a crisis they didn’t create.

– Without adequate finance, poor countries will now be expected to foot the bill for a crisis they didn’t cause. The finance exists. The political will does not.

Jagoda Munic, chairperson of Friends of the Earth International said:

“Instead of acting with ambition and urgency, our governments are acting in the interests of powerful lobbies and corporations, but people are taking back the power. History will not be made in the convention centre, but on the streets of Paris and round the globe. The climate justice movement is unstoppable and will continue to expand in 2016 and beyond. A handful of politicians will not stop the energy revolution.”

Today (Saturday 12th December) over 2,000 activists from the Friends of the Earth International federation, joined by thousands more from Paris sent a global message for climate justice and peace, writ large across the city in a peaceful protest. [1]

Friends of the Earth International is one of many civil society organisations that have used The People’s Test on Climate 2015 to assess the Paris climate agreement.

The demands in the Test cover the key pillars of what would have constituted a just deal: a commitment to keeping us well below 1.5 C warming while dividing the carbon budget using the fairshares principle; finance and support in line with rich nations’ climate debt; a just, systemic transformation; and justice for impacted communities, including compensation for irreparable climate damage. [2]

[2] The People’s Climate Test is available at http://peoplestestonclimate.org