From 1937 To 2018: The Militarized Suppression Of Protest In Puerto Rico

As I look on at my beautiful Puerto Rico and see the people rising against colonialism and economic tyranny only to be beaten and illegally searched and arrested by a militarized police, I keep thinking about the 1937 Ponce Massacre where 19 protestors and 2 police officers were killed.

On March 21, 1937 members of the Puerto Rican Nationalist Party held a peaceful march in Ponce, Puerto Rico to commemorate the abolition of slavery (1873), protest US colonialism, and challenge the arrest of nationalist leader Pedro Albizu Campos. Gaining word about the march, then appointed Governor Blanton Winship ordered the Insular Police of Puerto Rico to stop the demonstration in Ponce—approving the use of force in this mission. (Note: Winship was appointed by Franklin D. Roosevelt in 1934).

So when protestors started marching in Ponce, the police chief’s gave the orders to open fire. 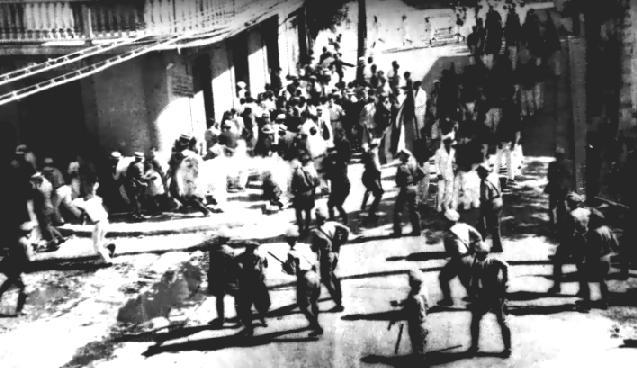 Chaos ensued as protestors ran in every direction. Some police shot at the masses from roof tops while other officers deployed tear gas canisters from below. People fell on the ground, trampled by others fleeing the horrid scene.

At the end of the chaos, 19 Protestors (among them youth) were killed. Two members of the insular police were also killed, seemingly from friendly fire. And hundreds were injured, fleeing the Plaza in Ponce to nearby barrios seeking medical attention. 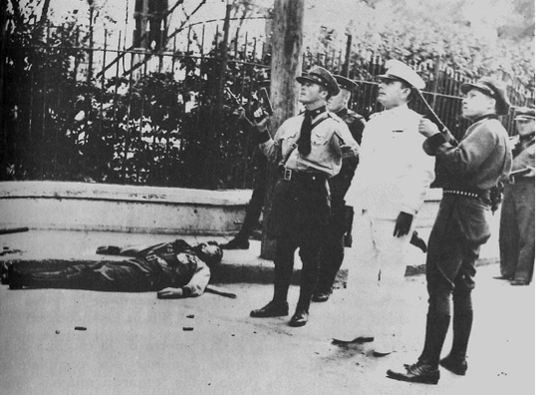 To cover up the role of the Insular Police in this massacre a photo was staged. In it you see the body of a shot officer in front of Police Chief de Orbeta with other officers pointing guns towards the roofs—making it seem like the Nationalists opened fire. While the photo and the propaganda it painted circulated for a short period of time it soon became clear that the Police Chief and Insular Police were responsible for the massacre, acting under the explicit orders of Governor Winship.

As we look at the present suppression of peaceful May Day protests in Puerto Rico we must remember history like the Ponce Massacre that reminds us this shit ain’t new. Colonialism-militarism-economic tyranny-suppression of resistance has been the reality in Puerto Rico for over 100 years! Moreover, this suppression of peaceful protest is explicitly linked to US suppression historically and globally through the use of militarized police forces. We saw this in Selma in 1965, in the Los Angeles Uprising in 1992, in Ferguson in 2014/2015, in New York City in 2015, at Standing Rock in 2016/2017, and we’re presently seeing it in Palestine as well. Under U.S. empire and the governments it has supported, police forces have functioned as a paramilitary arm of the government, used to suppress expressions of disagreement and critique. This is not new.

So, you want to know what you can do?

But in all things, learn with our people in Puerto Rico and the diaspora and avoid media that perpetuates ahistorical falsehoods. Because honestly, you cannot act in or out of ignorance. So learn about Puerto Rico and our history of resistance and resilience in the face of colonialism and empire. The resources are out there, and the people are resisting…