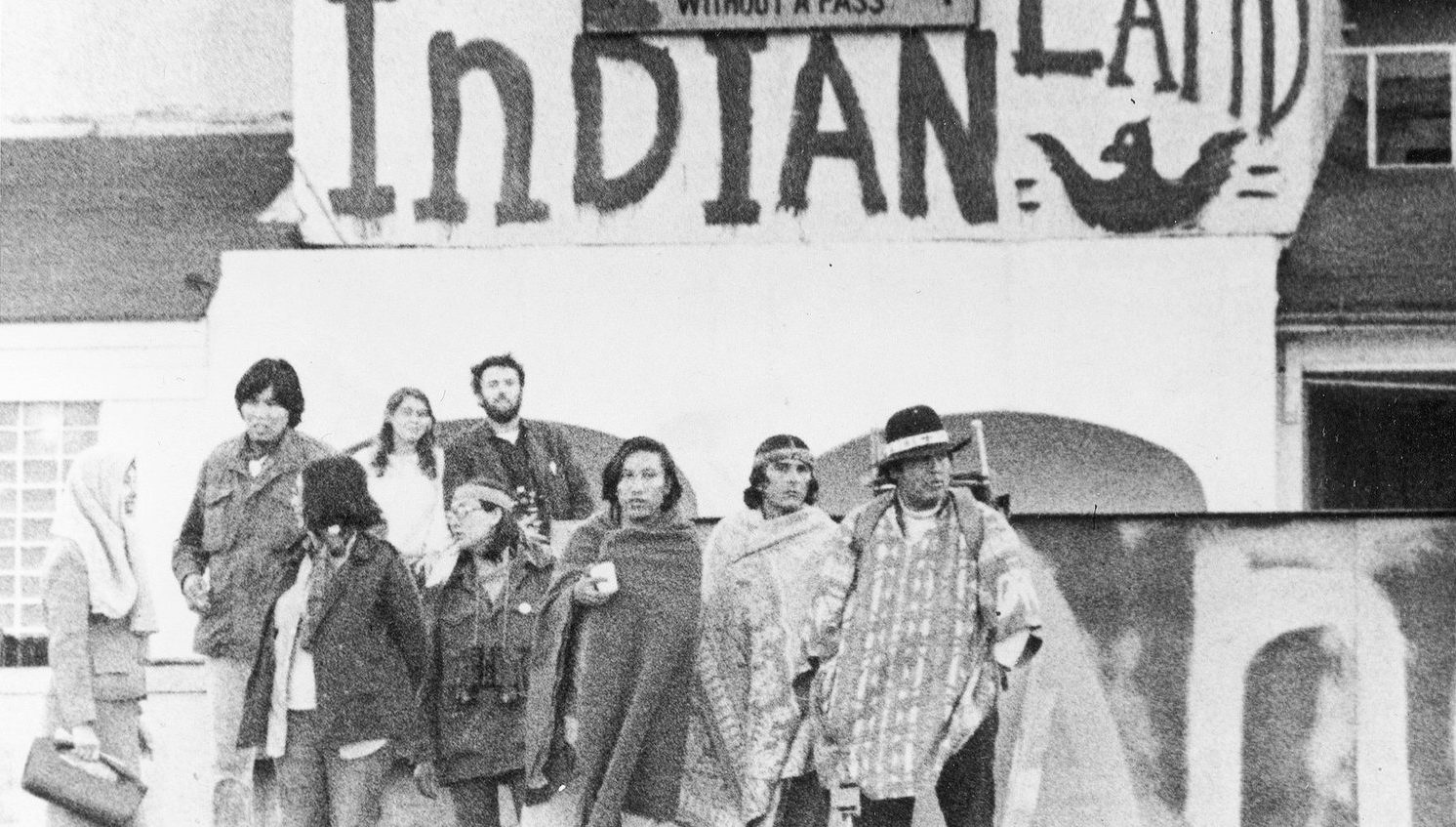 From Alcatraz To Moss Lake, The Land Back! Movement Is Not New

Above photo: “This island belongs to us by right of re-discovery!”

Land Back! is a popular slogan among Natives on social media in the form of memes, hashtags and posts advocating decolonization. It is spray painted on the sides of buildings and bronze statues of euroamerican colonizers (preferably in red), as well as appearing as a talking point on an episode of Reservation Dogs. Although the term has gained popularity via social media and perhaps viewed as a recent trend, Land Back! actions have been in effect since the Red Power movement of the 1960’s and 1970’s.

One of the more well-known Land Back! events from that era was the 1969 occupation of Alcatraz Island, a former federal prison near the San Francisco Bay. Hundreds of angry and motivated Natives arrived by the boatload and demanded the deed to the island. They wanted to build a university and cultural center to create something new and beautiful atop this monument of American misery. One of the primary organizers conveying this message to the press was Mohawk activist Richard Oakes.

In the beginning there was a coordinated effort to assign responsibilities to people such as security, daycare, and cooking. A council was made that would make decisions by consensus. With so many Natives involved, a new kind of community based on Indigenous cultural values seemed to be on the cusp. However, the Alcatraz takeback faltered over time. Toward the end there were instances of infighting, factionalism, and an overall sense of disorder. White hippies were reportedly moving in, taking up space and using drugs.

Ultimately, the entire takeover lasted for 19 months and ended after armed police removed everyone who was left, which was only a very small group. Although the demands issued by the Native community at Alcatraz were not met, this early Land Back! action was heavily reported by the media and inspired more Natives to pursue self-determination and historical land claims.

I should note that Richard Oakes’ participation in Alcatraz is significant as his people led a lesser-known land reclamation attempt 12 years earlier. In 1957 Frank Johnson aka Chief Standing Arrow, led Mohawks to reclaim a parcel of an 8,000-acre strip of land “owned” by a White farmer. Johnson stated the Fort Stanwix Treaty of 1784 was faulty and the Iroquois Confederacy never ceded this land to the U.S. To make their point, Mohawks reclaimed their territory and built a traditional longhouse along with other dwellings near Schoharie Creek to solidify their takeback. They also fought in court over the right to hunt on their own lands without a state license. Eventually, the twenty-five Mohawks who were still camping there in January of 1958 were given eviction notices by the county sheriff. The camp eventually disbanded a couple of months later.

The Mohawks were on a roll with their Land Back! initiative. In 1974, they took over 612 acres of an abandoned girl scout camp near Moss Lake in New York State. This time they weren’t messing around and showed up armed with guns. They asserted the 9 million acres of land they hoped to reclaim a part of was wrongfully signed away to New York State by Joseph Brant in 1797. At that time, land could not be sold without the express permission of the Six Nations Confederacy and Brant didn’t have it.

The majority of the families who participated came from the Kahnawake and Akwesasne communities to build Ganienkeh which means “land of the flint.” The primary purpose for the takeback was to establish a relationship to the land that would strengthen their way of life. Concerned with losing their culture amidst the social ills on the reservation, taking this action meant ensuring their people thrived under the guidance of traditional Mohawk values. Even though the site was not ideal for farming, the Mohawks were able to grow potatoes, beans, strawberries, onions, and corn. They also managed cattle, horses, and chickens. Roles and responsibilities were assigned, and the goal was to be as self-sufficient as possible.

For three years the determined Mohawks endured police harassment, slander, racism, and shootings. Finally, after countless meetings with state officials, Mario Cuomo (New York’s Secretary of State), agreed to the Mohawks re-locating to another site at Miner Lake located further north. This land encompassed 600 acres and was placed into a trust. There the Mohawks established gardens, a timber mill, and a bingo hall that helps generate income. Drugs and alcohol are not allowed considering these were issues they were hoping to escape on the reservations. Ganienkeh still stands to this day with a thriving community and minimal interference from the outside. The inspiring thing about Ganienkeh is the Mohawks took land back by force and re-built their community.

The common theme found among these examples from Alcatraz to Moss Lake is the goal of fighting for future generations. They weren’t hoping to get land back for the sake of extracting minerals and becoming corporate billionaires. Among the first demands issued in both places, as well as other takeovers during this time, were to create a place where Native culture would prosper without outside intrusion. They were hoping to reclaim land to ensure Native culture and traditional values survived.