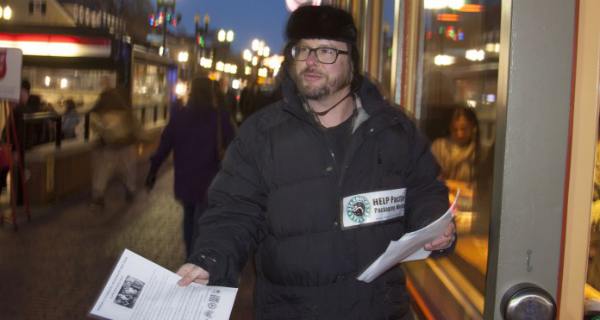 ‘From Bean To Cup,’ Starbucks Labor Action Heats Up

Above photo: As part of workers’ Week of Action, a protester distributes leaflets outside of a Starbucks in Cambridge, Mass. (Association of Western Pulp and Paper Workers)

The Starbucks cup, with its iconic green mermaid logo and smart cardboard sleeve, seems to embody the essence of the urbane yuppie lifestyle. But the carefully constructed cool of the coffee mega-brand belies some serious anger percolating beneath the surface of Starbucks’ supply chain.

That cup means something different to Ray Allen, a machine operator at a paper goods plant run by Pactiv, a major Starbucks supplier. Allen got his first full-time job at the Stockton, Calif. factory; now, more than a decade later, the steady employment has allowed him to own a home and raise a family. But it hasn’t come without cost.

“I have given [Pactiv] my blood, sweat, and tears throughout the years,” said Allen in a recent testimonial. “I have missed many events in my children’s lives for this job with no regrets. All I ask for in return is a fair contract to preserve our well-deserved and hard-earned middle-class way of life.”

Since the Stockton factory’s parent company, Dopaco, was taken over by Lake Forest, Ill.-based Pactiv in 2011, Allen’s union, Association of Western Pulp and Paper Workers Local 83, has been fighting for such a fair contract. The union says that management is pushing for unreasonable cutbacks on benefits and trying to allow temporary agency workers, hired outside the union, into the plant—a major departure from the old contract terms. They also claim the company wants to take away paid mealtimes, which they fear would significantly cut wages for a standard workweek.

The Stockton employees represent one of the last bastions of unionization in Pactiv’s workforce—just nine of its 55 facilities worldwide are union, PlasticsNews reported last year. Union representative Greg Jones says Pactiv’s proposal of hiring more temp workers, in particular, “really weakens our bargaining potential” and “only gives Pactiv the incentive to try to use more and more temp workers, at lower wages with no benefits … it eventually could be the demise of the union.” And Pactiv has a reputation for labor antagonism. In Kearny, N.J. last year, Pactiv shuttered a plant producing Reynolds-brand packaging products following months of labor clashes. The workers-—mostly Latina and Chinese women—launched a campaign accusing the company of imposing harsh working conditions, unfair layoffs and trying to bust their unionization efforts.

In Stockton, labor conditions have also declined in the last year, say workers. Ever since Pactiv’s takeover, they claim, the workload has gotten more stressful and management has gotten harsher.

Overall, the union argues, workers want nothing more than a contract that preserves their current working environment, retirement benefits and healthcare provisions. “There’s no greed on our side of the table,” says Jones, adding that workers are “just trying to keep what we got.”

Last week, frustrated by what they see as Pactiv’s stubborn refusal to budge in negotiations, the Stockton workers took their fight public. With the help of the Starbucks Workers Union (SWU), a small grassroots network of baristas and shift supervisors, they organized an international Week of Action to call attention to the injustices they’re facing.

During the Week of Action, which began November 25, employees and activists from allied unions campaigned online and with street demonstrations in 15 major cities. “John,” a Starbucks barista from southern Wisconsin who requested anonymity for fear of retaliation, is one SWU activist campaigning under the Week of Action’s banner of “solidarity from bean to cup“—a reference to supporting Starbucks workers at all stages of the supply chain. He tells In These Times that Starbucks “refuses to let workers exercise their right to a union and turns a blind eye to the abuses of suppliers.” (Starbucks and Pactiv did not respond to requests for comment for this story.)

To coincide with the campaign’s launch, Jones also issued an open letter to Starbucks CEO Howard Schultz on November 25 urging him to step in on behalf of the workers. In the letter, Jones stressed that the workers were “in no way … encouraging you to withdraw any business from Pactiv.” Instead, the letter continued, the union wished to meet Schultz to “discuss what you may do to help the employees in their struggle.”

The Week of Action is just the latest in a years-long series of efforts by worker activists at Starbucks to advocate on behalf of employees. In late 2008, a National Labor Relations Board judge ruled that Starbucks had cracked down on and illegally fired three baristas for trying to unionize. Another legal battle is now underway in Oregon, brought by three workers who accuse the management of shorting their pay by misreporting their tips. And in Chile, the company was recently fined and sanctioned in court for systematically violating union rights and undermining collective bargaining.

In general, labor advocates have pointed out the irony of Starbucks’s branding as a “socially responsible” corporation while its baristas often struggle to survive making less than $9 an hour.

So far, neither the coffee giant nor Pactiv has responded to the grievances aired in the Week of Action campaign. Jones is optimistic, however, that the solidarity brewing across the supply chain will continue. Eventually, he hopes, both corporations will “begin to get the message that the greed must stop, and that they must begin to deal fairly with the workers who make them profitable.”

Michelle Chen is a contributing editor at In These Times. She is a regular contributor to the labor rights blog Working In These Times,Colorlines.com, and Pacifica’s WBAI. Her work has also appeared inCommon Dreams, Alternet, Ms. Magazine, Newsday, and her old zine,cain.