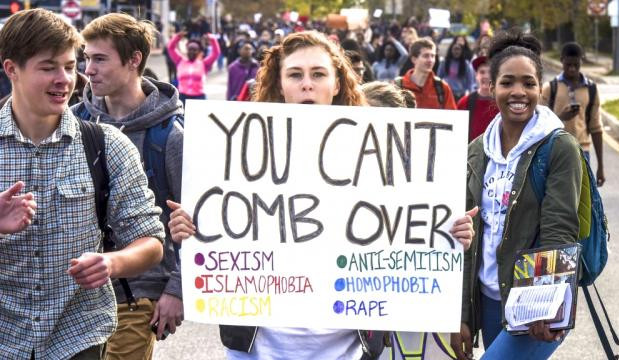 From D.C. To L.A., Students Across America Protest Trump’s Election

A group of hundreds of Maryland high school students walked out of class on Monday morning to protest Donald Trump’s presidential election, streaming into the school’s football field before numerous students headed out into local streets, tying up traffic.

Students from Montgomery Blair High School in Silver Spring moved their protest along University Boulevard, heading toward other Montgomery County schools in an attempt to recruit more anti-Trump protesters. Many of the students who walked out of class at about 10 a.m. returned to class before their next period began shortly after 11 a.m.

Some students said they walked out as a show of solidarity with people who felt alienated during Trump’s campaign, including immigrants and minorities.

“I feel disappointed that Trump is president,” said ninth grader Jorge Ventura, 15. “I feel anyone, any race, should come here and feel welcome.”

Immigrants contribute to American society, he said. “They could cure Ebola, cancer, anything like that.”

Blair students talked about their school being diverse — 26 percent of the students are black and 32 percent are Hispanic — and how they believe it is important to stand up for minorities in the U.S. Officials estimated that about 1,000 students walked out, about a third of the school’s 2,800 student body.

“Montgomery County students are coming together to show how we care about this topic, and he is not our president,” said Northwood High School student Lulawit Adhanom, 14, as she walked down University Boulevard toward the protest started by Blair students, which went on toward the Westfield Wheaton mall.

She and others said they heard of the protest though social media and left their school to join in. She said she and her friends had never missed a class before and had never previously joined a protest. But they said this was important.

Hundreds of students from the Los Angeles Unified School District were out on the city’s streets demonstrating Monday morning, some holding U.S. and Mexican flags and signs that read “siempre unidos” — always united.

“For their own safety and to follow the law, they should remain on campus,” King said in a written statement. King said the schools are utilizing assemblies, classroom dialogues and speaking activities to “provide a secure forum for our students.”

“These are important conversations that need to take place,” King said. “However, it is critical that students not allow their sentiments to derail their education or for their actions to place them in danger.”

Protests also broke out during the past week at major U.S. college campuses, which often have left-leaning student bodies, including some that morphed into contentious clashes between Clinton and Trump supporters. Protesters at American University in Washington, D.C., for example, burned flags during a protest last week, an action that led to a shouting match with Trump supporters.

Students at D.C.’s Wilson High School — the biggest high school in the D.C. public school system — plan to walk out of classes Tuesday to protest Trump. The students say they plan to take the Metro downtown, march along Pennsylvania Avenue and stand in front of the Trump Hotel holding hands, according to a flier being passed around via email and social media.

Kimberly Martin, Wilson’s principal, emailed the school community Monday morning, emphasizing that the protest is not a sanctioned school event and that students who miss class will receive unexcused absences. Martin also wrote that school administrators and teachers defend all students’ right to peaceful protest and self-expression.

“Wilson Social Studies teachers, and many other teachers, empower students to be inquisitive, informed, and engaged citizens who use critical thinking, inquiry and literacy to prepare for college, careers, and civic life,” Martin wrote in the email. “However, students will be reminded to follow their regular class schedule, as we cannot ensure the safety of any student that chooses to leave the school prior to dismissal.”