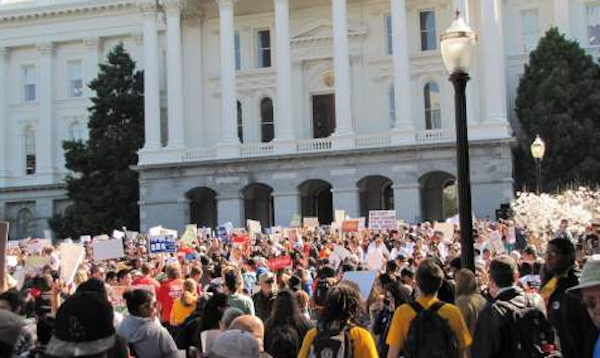 March To “Stand Up For Democracy”

In an attempt to end plutocracy, millions of Americans, who believe in true political equality, have created a movement to reclaim democracy for the 99 percent. From March Against Corruption protests to the New Hampshire Rebellion, more people are joining the struggle to fight for democracy and spread the word.

And on May 17, California March for Democracy started their non-violent march in Los Angeles. The 480-mile march will continue “over mountains and across the valleys of California” to reach the state capitol in Sacramento. As a way to protest plutocracy, California March for Democracy is demanding the politicians leading the largest state to “publicly acknowledge the crisis of corruption and take immediate action to end it.”

“Big money’s corruption of American politics is so complete that we can no longer deny the truth: democracy is dead in America.”

California March for Democracy’s call to action is urging the California legislature to give California’s voters the chance to formally instruct the U.S. Congress to propose an amendment to outlaw big money corruption through the Assembly Joint Resolution and to start reigning in anonymous big money in elections through the DISCLOSE Act, therefore requiring top donors be revealed.

“We the people will no longer stand idly by while our government is bought and sold to the highest bidder.”

If the protest’s demands aren’t met by the end of the 37-day march, California March for Democracy will “nonviolently occupy the capitol until they are,” according to its website.

“We will force our political leaders to come over to the side of the people and push for the end to big money corruption and the beginning of a representative democracy that is dependent upon the people alone.”

In a movement of the 99 percent, California March For Democracy is determined to reclaim democracy and end the corporate mantra, “One Dollar, One Vote.”

To support the march, or sign the petition, which will be delivered to the California state capitol, click here. For more information about the California March for Democracy, visit its website.