Note: We appreciated the “Walk-In” of this education protest, as opposed to the more traditional “Walk-Out” of student-teacher protests. The agenda of this group is a strong one with which we associate ourselves but we are concerned that the unions organizing this are too closely aligned with the Democratic Party. Many of the issues with which they are concerned have been pushed by Democrats at all levels of government. There will be a time when to achieve the transformational agenda we need, that groups will have to break from the Democrats to push for policies our youth, teachers and parents need.

Amelize Joseph loves the public school that her 14-year-old daughter attends. Her daughter likes to sing, and students at Intermediate School 285 in Brooklyn, New York, can participate in chorus, dance and drama. In a neighborhood where most kids don’t have much, those programs are extra valuable.

That’s why she’s so frustrated that New York state is shortchanging funds for public education. “We need the money in order for the school to go forward,” said Joseph, who has four children.

On Thursday, she and other parents, students and educators took their grievances to school. More than 100,000 people took part in a nationwide “walk-in” at more than 2,000 schools in 238 cities, according to the event organizer Alliance to Reclaim Our Schools (AROS).

They were joined by some high-profile guests, including Democratic vice presidential nominee Tim Kaine.

At her Brooklyn school, Joseph and other community members protested the state funding system, which advocates say disadvantages needy schools. People in other cities rallied over issues like the expansion of charter schools and high-stakes student testing.

Keron Blair, executive director of AROS, called for more school investment in a statement on Thursday.

“In a moment when a couple dozen investment bankers in the U.S. together make more than every kindergarten teacher in the country ​combined, we know something is very wrong,” said Blair. “Many schools in Black and Brown communities across the country are called failing. But it is the students, parents and educators that have been failed.”

AROS argues that families still want their own neighborhood schools, despite the proliferation of publicly funded, privately operated charter schools in recent years. The latter tend to draw from across the wider school district.

Charter schools remain a policy favorite on both sides of the aisle, promoted by Republican presidential nominee Donald Trump and the Obama administration. But in recent months, the so-called school choice movement has faced more pushback. In July, the NAACP called for a moratorium on charter schools. The Movement for Black Lives, a collective of social justice groups, did so as well.

Others in the African-American community have opposed the NAACP resolution. In late September, a group of black parents with kids in charter schools sent a letter to the NAACP board of directors urging them to reconsider.

“From Seattle, to Oklahoma City, to Houston, New York, and New Jersey, we see charter schools offering parents of color hope that their children can have a better future,” the letter reads. “Our support for charter schools is not abstract, but instead based on our personal experience. Our children are thriving in charter schools.” 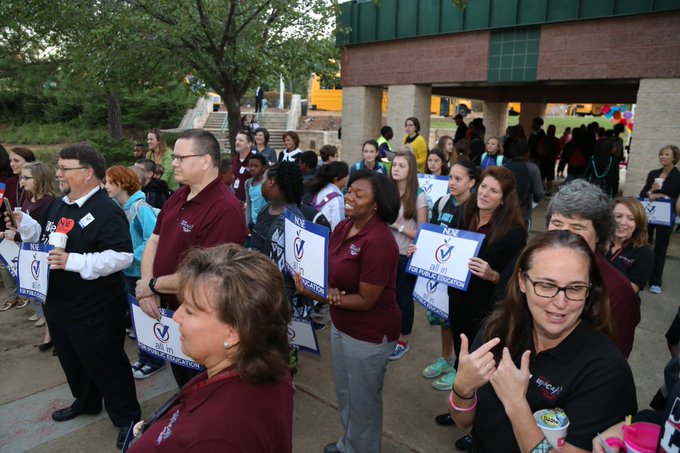 “Nobody wants to bus their kids to go to a magnet school or charter school. What parents really want is a quality neighborhood school right in your community,” said Hester.

Michael Mulgrew, president of the United Federation of Teachers, which represents New York City educators, said he hopes the day of action sends a message that “communities are standing up for their public schools.”

“Let’s get back to saying our schools are something we support and will protect, and we don’t want people to play games with them anymore,” said Mulgrew.