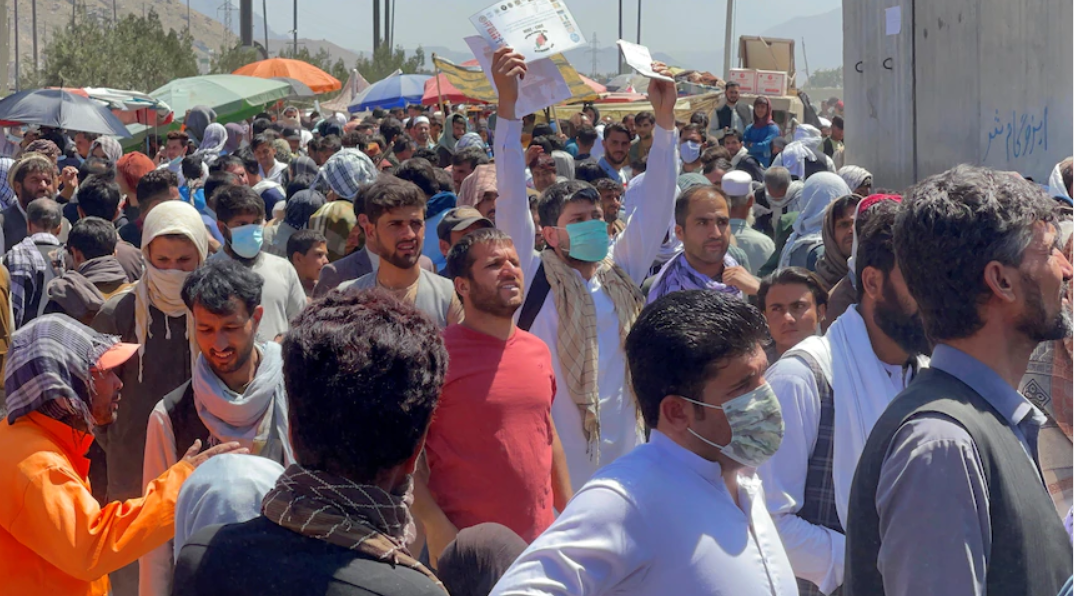 Further US Hostility Against The Taliban

Above photo: US-led evacuation flights from Afghanistan have resumed with new urgency, a day after two suicide bombings targeted the thousands of desperate people fleeing the Taliban takeover and killed more than 100. ABC Australia.

NOTE: Listen to this week’s interview on Clearing the FOG with Col. Ann Wright about the evacuation of Afghanistan, CIA involvement in training local militias and the lies told by the US government to protect the profits of the Military Industrial Complex.   MF

The chaotic evacuation of international ‘assets’ and economic migrants from Kabul airport just got more complicate.

An hour ago a suicide bomber blew himself up amidst a crowd which was waiting to get access to the airport. Additionally gunfire was heard. At least 13 people got killed. There are pictures and video of dozens of killed and wounded Afghans.

Hours ago the U.S. and UK had warned of an imminent ISIS attack on the airport and had asked their citizens to stay away from the airport.

The evacuation flights for civilians were supposed to end today. That was to leave time for the several thousand military on the ground to wrap up their mission before the August 31 end date. The Taliban have insisted on that final date.

Whoever has sent in the suicide bomber wanted to interrupt that process. Your guess who that was is as good as mine.

The whole evacuation panic was and is, in my view, totally unnecessary.

The Taliban have no interest in taking hostages or in taking systematic revenge on Afghan personnel that had worked with foreign governments. They publicly issued a complete amnesty. They also need money, international recognition and support.

The U.S. has blocked the Afghan central bank accounts with the Fed and ordered the IMF and the World Bank to not provide money to Afghanistan. That is huge leverage.

The U.S. could have used that leverage in a positive sense to organize, if necessary at all, a very smooth and orderly evacuation of people by normal civil flights over several weeks or months. But for some reason the Pentagon friendly media in Washington created an artificial panic and set off a monstrous military emergency show.

The U.S. should by the way lift its block on that Afghan money. It is in its best interest to have good relations with the Taliban. The German chancellor Merkel recognized that. She announced that Germany will continue to support Afghanistan even under Taliban rule. It is the right thing to do because Afghanistan is still a dirt poor country, because there are people in need and because it is in ‘western’ interest to keep Afghanistan peaceful and united. An unruly Afghanistan under financial pressure is way more likely to create trouble abroad – be it as shelter for global militants or as a source of huge refugee streams.

Withholding money does not create long term leverage. Leverage is to use money to reward good behavior. The Taliban have so far behaved very well. They protected the airport from again being overrun. All of Kabul except for the airport is living a normal life. People are back at work, the banks have reopened.

President Joe Biden has taken on political risk by ordering the complete retreat from Afghanistan. Should he consider further hostility against the country, by financial means or by igniting a new civil war as some Republican demands, he will not gain the political profit from it.