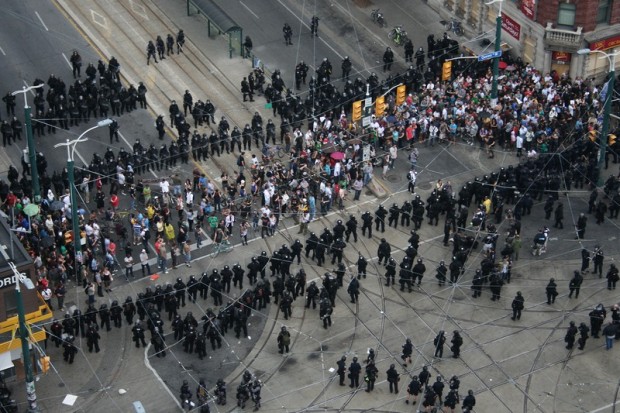 Above: Protesters at G20 in Toronto boxed in by riot police at Queen and Spadina. Photo Credit: Jonas Naimark/Wikimedia Commons

The statement below, which provides an excellent analysis of the economic, environmental and military issues facing the world, was made by G-20 protester, Joel Bitar. It was made to Justice Ronald Boivin as part of the process of sentencing for his role in the G-20 protests in 2010. Family and friends applauded after Bitar finished reading his letter to the justice. Before sentencing him, even Justice Boivin said he was impressed with the statement.

Joel was arrested in New York City on an arrest warrant on February 14, 2013 by US federal marshals acting on a foreign extradition request from Canadian authorities. Joel was charged with 26 counts, almost all relating to property damage that occurred during the G20 summit protests in Toronto, Ontario, Canada in June 2010. On Friday, April 12th, Joel waived extradition, which allowed him to voluntarily return to Canada for arraignment. On April 16th, Joel traveled to Canada with his father and was immediately arrested by Canadian authorities upon his arrival at Pearson International Airport in Toronto. He was arraigned the next day and released on $100,000 bond.  He was allowed to return to New York City and required to return to Canada for court hearings.

Joel was one of 1,100 people arrested at the Toronto G20 protests, the largest mass arrest in Canada’s history. These arrests have led to numerous charges of brutality and misconduct by the police during the G20 protests, as well as lawsuits and even an official public inquiry that have substantiated  police misconduct. The charges against Joel are almost exclusively relating to property damage. It is highly unusual to pursue someone across borders on these kinds of charges related to political protests.

Two other G-20 protesters have been convicted and sentenced. On February 13th, Kevin Chianella plead guilty to 16 charges (originally faced 53 counts) and was sentenced to 24 months in a penitentiary, the only G20 prisoner to be sentenced to such a place. Kevin was not required to pay any restitution because of his financial circumstances.  On February 3rdm Richard Moriano plead to 6 counts (originally faced 14) and received 7 months in jail plus $3,000 in restitution and is banned from Toronto during his two-year probation. The prosecuting attorney originally asked for 12-15 months.

Joel, 28 years old, was handed a 20-month term on Thursday, February 13, 2014 by Justice Ronald Boivin. In an agreed statement, Joel admitted to using Black Bloc tactics of disguising themselves in black clothes and face coverings as they attacked storefronts and police vehicles. Justice Boivin said he was impressed with Bitar’s speech about various global issues but “that doesn’t justify breaking windows and jeopardizing people’s lives. That is not a legitimate form of protest.”  Boivin encouraged him to stick to legitimate forms of protest in the future.

I have not been able to speak much since my arrest last February so I appreciate the opportunity to make a statement today. I only plan on taking a small amount of your time. At the end of my statement I am going to to issue an apology to some of the individuals who were affected by my actions. It is my hope that this statement better contextualizes the choices I’ve made that have led me to this courtroom.

I came to Toronto four years ago for many of the same reasons as the tens of thousands of other people who marched on the streets that day. These are many of the same reasons why hundreds of thousands of people have demonstrated in Seattle against the World Trade Organization, in Genoa against the G8, in Quebec City against the Free Trade Area of the Americas, in Gothenburg against the EU summit, in Rostock against the G8 and in Pittsburgh against the G20. They are many of the same reasons why people are now protesting in the streets of New York, Brazil, Chile, Mexico, Turkey, Greece, Italy and Spain. It is only really possible to understand the events that took place in Toronto in the context of the global movement against neoliberalism and the corporatization of the planet. It is my belief that this movement is best explained as an individual and collective response to various forms of domination and exploitation. My politics are inseparable from my own life experiences, which I would like to briefly speak about now.

I grew up in an environment where I had access to many of the things required for conventional success. I had – and have – an extremely loving family, I played tennis competitively and had a working-class, but generally supportive upbringing. I graduated from high school with honors and then got my bachelors degree in Economics from the City University of New York. My plan in college was to work on Wall Street with the goal of making a lot of money. That goal was widely reinforced and encouraged by society at large. Trying to get rich and focusing on my own personal comforts seemed right when everyone else was chasing the same thing. However, two events occurred during this time that fundamentally changed the way I now see the world.

The first event was the global financial crisis of 2008. During this time, banks that engaged in predatory lending practices were given billions of dollars to keep their businesses afloat while millions of people lost their homes. It was shocking how closely government officials who once worked on Wall St. collaborated with the financial sector to organize the bailout. It seemed profoundly unjust to me that those who precipitated the crisis were rewarded, while masses of people were literally tossed to the street. I came to the conclusion that Wall Street’s obsession with profit comes at the expense and detriment of the majority.

The second event took place in December, 2008, when Israel launched an invasion into the Gaza Strip that resulted in the deaths of 800 civilians (many of whom were women and children). This destruction was carried out with weapons manufactured by U.S. Corporations and was paid for with U.S. taxpayer money. During this invasion, banned weapons like White Phosphorous (made in the U.S.) were fired at Palestinian schools and hospitals in contravention of international humanitarian law. I saw images of innocent children killed by missiles, tank shells and bullets. At the same time many of these people suffered, weapons manufacturers and government officials profited from their obliteration.

From these two events I developed an opposition to the wars in Iraq and Afghanistan. Hundreds of thousands of civilians have died in these wars while corporations like Halliburton and Lockheed Martin have secured billions of dollars in government contracts. George Bush erected a worldwide torture regime, that Obama has only expanded, and has since been immune to any prosecution for his crimes. It is evident that those who commit crimes at the top levels are government are immunized while someone like Chelsea Manning, who revealed the extent of government criminality, is banished to a cage for decades. It is apparent to people, all throughout the world, that the real motivations for these wars is rooted in the economic interest of a few and that masses of innocent people have needlessly suffered as a result.

This led me to see more and more about the world that I could not unsee, including how the continued exploitation of the environment is connected to the same economic interests mentioned above. One notoriously brutal example of environmental exploitation is happening here in Canada at this moment. In Alberta, pristine boreal forestland the size of Florida has been turned into a toxic wasteland for the extraction of oil. James Hansen, a professor of climatology at Columbia University believes that the tar sand project is “game over for the climate.” He says: “If we were to fully exploit this new oil source, and continue to burn our conventional oil, gas and coal supplies, concentrations of carbon dioxide in the atmosphere eventually would reach levels higher than in the Pliocene era, more than 2.5 million years ago, when sea level was at least 50 feet higher than it is now. That level of heat-trapping gases would assure that the disintegration of the ice sheets would accelerate out of control. Sea levels would rise and destroy coastal cities.” It should not be acceptable to us that private corporations and western governments regularly exploit natural resources for profit while simultaneously destroying the environment and injecting pollutants into our air and water.

Financial crises, war and environmental degradation share a common thread. They are born of the prevailing economic system, which is only interested in maximizing profit and increasing growth. This system is predicated on maintaining vast levels of inequality, where a small number of people have incredible amounts of wealth while the masses are locked in poverty. A recent report published by Oxfam International states that the 85 richest people possess the same wealth as the poorest 3.5 billion people combined. Rather than providing wealth and opportunity, or having a trickle-down effect, the current system enriches the few at the expense of the many. This is not a particularly radical analysis, this is the only rational interpretation of how society is structured. Even such a mainstream figure as the Pope recently said: “As long as the problems of the poor are not radically resolved by rejecting the absolute autonomy of markets and financial speculation and by attacking the structural causes of inequality, no solution will be found for the world’s problems or, for that matter, to any problems.” Rather than addressing these structural causes, Western governments do everything they can to foster the status quo that leads to the problems.

The current situation in the world is urgent and much needs to be done. I truly believe we can build a new system that puts human need and the needs of the environment ahead of the interests of business. At some point, we need to decide if profit, innovation and economic growth are more important than the long-term sustainability and well-being of our species and planet. I understand that this proposition might not sound so good to someone who is financially benefiting from the current system but we are running out of time. We have enough resources to make sure every person on this planet has health care, food, an education and a place to live. There is no reason why people should be homeless and begging on the streets while food is thrown away en masse and foreclosed houses remain empty. There is no reason why such massive levels of inequality should persist in the modern age. These systems are antiquated and must be fundamentally transformed

It was not, and has never been, my intention to scare or hurt anyone. I want to build a world based on the values of love, compassion and understanding; not fear and intimidation. I take responsibility for my actions and apologize to anyone who felt fear as a result of them. Before closing, I would like to extend my heartfelt gratitude to my family, friends and supporters. This process has taken an incredible toll on myself and especially my loved ones. It means the world that they have stood by me through it all.