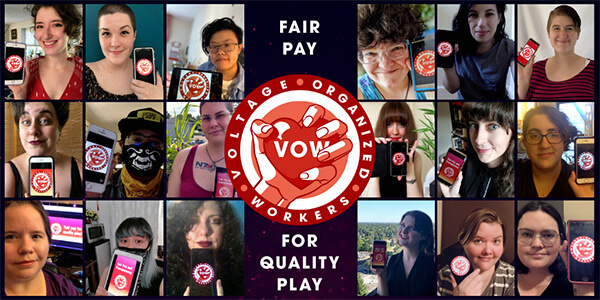 Game Writers Made History By Going On Strike — And Winning

Above photo: From CWA.

The 21-day strike ended with an agreement.

Twenty-one writers who were contractors that create scripts for the mobile app Lovestruck: Choose Your Romance went on strike on July 15 — a move nearly unheard of in the video game industry. Calling themselves Voltage Organized Workers, the group demanded better pay and workplace transparency, but the company that owns the app, Voltage Entertainment, at first refused to recognize their requests.

Working with the Campaign to Organize Digital Employees (CODE), an initiative part of the Communications Workers of America (CWA), Lovestruck’s writers stayed on strike for 21 days. And then they won. The entire team received a pay increase and “improved transparency,” the group said. The average pay increase is 78%, workers told Polygon, while the largest is by 94%, and the smallest is up by 66%.

“It’s really important to note that for this first successful game workers strike, every single one of the participants were either women, non-binary, LGBTQ, or people of color,” Kinema told Polygon. “Their marginalization and the fact that they’re contractors as well — they don’t even have the right to organize in a protected way — speaks to a large component of the industry that is completely unprotected and very marginalized.

“I suspect it’s kind of telling of where things will go in the future.”

Frances Maples, a Lovestruck writer, told Polygon that it’s particularly inspiring to see this group of people, all from marginalized backgrounds, come out with such a monumental agreement.

“It makes it even more impressive what we were able to do,” Maples said. “What I mean, specifically… sexism and homophobia cause minorities to feel less likely to demand things that they need, out of fear. And so, our ability to step up — I think it’s even more impressive when you take that into consideration.”

Voltage launched the app in 2017, but the company had been publishing visual novel stories and games for years before that. It’s since amassed hundreds of thousands of users. Voltage Entertainment, a subsidiary of the Japanese company Voltage Inc., opened a U.S. office in 2012, and the English-language audience grew from there. Now, Lovestruck has at least 16 ongoing Choose-Your-Own-Adventure-style visual novels on the application. Stories on there are known for distinct, inclusive romance options; writers are from marginalized genders and sexualities, and that is reflected in the stories that are told. People have embraced Lovestruck because of it.

Lovestruck is a free application, but portions of it are set behind paywalls. Despite the app’s success, writers said they were drastically underpaid for their work, and often required to meet difficult deadlines. Because the writers are contracted workers and not employees, they were not recognized as a union — protections were never guaranteed. But they formed Voltage Organized Workers and went on strike anyway.

Devan Soyka, a contract writer with Lovestruck, told Polygon that the writers came together organically to discuss their experiences, speaking to each other privately in small groups. Because the teams are largely remote, many writers hadn’t actually known much about the entire team. Soyka said they “quickly realized that the entire team shared the same concerns” about work and pay issues.

“Within just a few days we were all together, meeting with CODE-CWA and talking about what we could do,” she told Polygon.

Lovestruck writers planned for months before going public with the strike, organizers told Polygon. When they did, though, they were met with overwhelming support from the industry and Lovestruck fans. In a GoFundMe fundraiser setup to support lost wages during the strike, the workers raised almost $9,000. More than 4,000 Lovestruck supporters signed a petition urging Voltage to address the demands.

After all, the agreement they were after would be the first of its kind, but they did have other organizations and companies to look toward. Though the history of unionization and labor organizing in the video game has been sparse, there are standouts: In 2017, SAG-AFTRA voice actors went on a lengthy strike with video game publishers, and won after 11 months. Though not unionized, Riot Games employees have been organizing, too. In 2019, workers took part in a major walk-out to protest the company’s forced arbitration policies.

This year, Paradox Interactive signed a collective bargaining agreement with 200 union members, open to employees in Sweden. Previously, workers at South Korean company Nexon formed a union, too. But support for unionization has become noticeably larger in recent years, as workers grapple workplace conditions and unfair practices. As of 2019, 47% of developers support unionization efforts — with 16% explicitly against it — according to a Game Developers Conference Survey.

Those paving the way for collective bargaining and union efforts are up against an industry that’s historically been against unionization. The technology industry has been historically anti-union, relying on overworked and underpaid workers to create capital for the company. Video game workers report working long hours — 70- to 100-hour weeks under extreme crunch conditions — and a history of racist and sexist work culture.

Because Lovestruck’s writers are contracted workers, like many in the video game industry, they’re not technically a union — at least, not one recognized and protected legally. But Kinema said that their unity is still powerful; the company did, ultimately, address their demands.

“At the end of the day, the thing that really gets positive change for workers is economic leverage, and economic leverage comes from the fact that we, the workers, create all the value and profit and quality of our companies,” Kinema said. “And so if we can withhold that labor collectively, we have a huge amount of power in the workplace.”

That collective power is “a better protection than anything you could get under labor law,” Kinema said.

Kinema told Polygon that she’s already seen an increase in workers reaching out about unionization since the Lovestruck strike. In the weeks since the strike ended, we’ve seen workers come forward publicly, as a collective, to address workplace inequalities and injustice. And employees at both Riot Games and Blizzard Entertainment have pushed for change in their workplaces. Workers at Riot, from all reaches of the company, spoke out on social media about a problematic sponsorship, forcing the company to respond to criticism. Because of that, the partnership was pulled the next day. At Blizzard, workers began organizing over Slack to share salaries and increase pay transparency, according to a Bloomberg report.

Even so, Kinema said the game industry is still very early on in its game unionization efforts.

“It’s really a culture change more than anything else,” Kinema said. “And that just takes time. The more and more of these kinds of examples start popping up, I think the more frequent we’ll see more people doing this and succeeding, and inspiring one another to do this in their own workplace.”