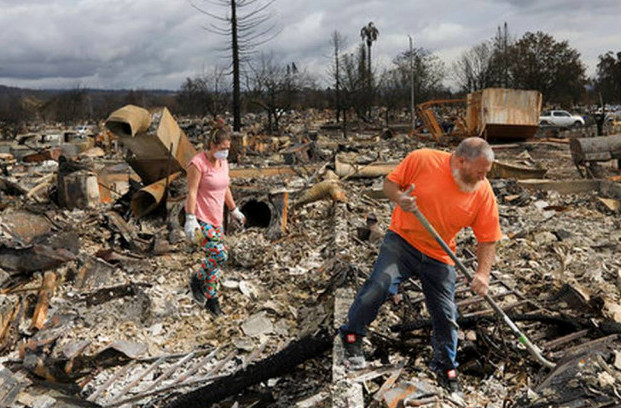 Above Photo: Sarah Boryszewski is helped by her father Gerald Peete as they dig for belongings in the remains of Boryszewski’s home in Coffey Park, Friday Oct. 20, 2017 in Santa Rosa, Calif. Northern California residents who fled a wildfire in the dead of night with only minutes to spare returned to their neighborhoods Friday for the first time in nearly two weeks to see if anything was standing. The Press Democrat via AP Kent Porter

A Government Accountability Office report released Monday said the federal government has spent more than $350 billion over the last decade on disaster assistance programs and losses from flood and crop insurance. That tally does not include the massive toll from this year’s three major hurricanes and wildfires, expected to be among the most costly in the nation’s history.

The report predicts these costs will only grow in the future, potentially reaching a budget busting $35 billion a year by 2050. The report says the federal government doesn’t effectively plan for these recurring costs, classifying the financial exposure from climate-related costs as “high risk.”