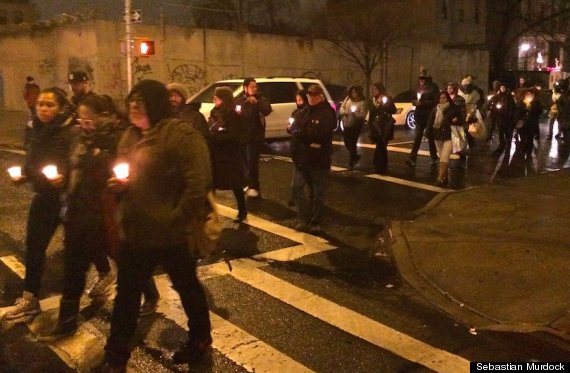 Above: The silent march through Bedford-Stuyvesant, a half-mile from where the NYPD officers were killed. Photo by Sebastian Murdock.

Can the NYPD show the same respect for those killed by police as those who criticize the NYPD are showing toward the slain officers?

As New York City reels in the aftermath of the assassinations of two NYPD officers, protesters and loved ones gathered Monday night to honor the lives of the victims.

At a candlelit gathering in the Bedford-Stuyvesant neighborhood of Brooklyn, a half-mile from where officers Rafael Ramos and Wenjian Liu were shot to death execution-style by Ismaaiyl Brinsley, 28, on Saturday, several dozen people held makeshift lanterns made of Dixie cups as they marched from Herbert Von King Park to St. Philips Church in silence. The attendees, including many who have spent the past month protesting the police killings of Eric Garner and Michael Brown, said they came to honor the officers who were killed and those who have been killed by officers.

“Tonight is an opportunity to come together for a moment of reflection,” Michael Premo, 32, a freelance journalist and Bedford-Stuyvesant resident who helped organize the vigil, told The Huffington Post. “There’s a lot of confusion, a lot of pain. … The loss of these officers is absolutely tragic. Any loss of life is tragic.”

At the Bedford-Stuyvesant vigil, 25-year-old Darius Gordon dismissed recent remarks by NYPD Commissioner Bill Bratton that linked recent protests against police brutality in New York City to the murders of Liu and Ramos. “It’s not comparable,” Gordon said. Brinsley “shot his girlfriend before coming here from Baltimore. It’s not related at all. Just because [Bratton] says it is does not make it true.”

Still, Gordon stressed that Monday’s event was about stopping all violence. “We’re not here in anger, because a loss is a loss,” he said. “And we grieve as much as they do.”

At a police charity event on Monday, Mayor Bill de Blasio asked demonstrators to refrain from holding protests until after funerals for Ramos and Liu. “It’s a time to step back and just focus on these families,” the mayor said. “I think it’s a time for everyone to put aside political debates, put aside protests, put aside all of the things that we will talk about in due time. In the coming days, as two families prepare for funerals and figure out how to piece their lives back together, that should be our only concern: How do we support them?”

Skipp Roseboro, a 69-year-old retiree from Bedford-Stuyvesant who attended Monday night’s candlelit march, told HuffPost that he wished the department would show the same respect for those killed by police as those who criticize the NYPD are showing toward the slain officers. “Mr. Lynch and others in the police community do not share that compassion the other way,” he said. “That’s one of the problems.”

Black Lives Matter, the grassroots organization behind many of the recent protests, condemned Brinsley’s actions in a statement on Saturday. “An eye for an eye is not our vision of justice, and we who have taken to the streets seeking justice and liberation know that we need deep transformation to correct the larger institutional problems of racial profiling, abuse, and violence,” the group said. “We know all too well the pain and the trauma that follows the senseless loss of our family members and loved ones. We extend our hearts and prayers to the families of those who lost their loved ones this week. No one should suffer the loss of those whom they love.”

In a blog posted on HuffPost Monday, Black Lives Matter co-founder Opal Tometi spoke out against Bratton and Lynch’s accusation that the ongoing demonstrations were to blame for the killings of Ramos and Liu. “We challenge the ways in which a senseless tragedy, an isolated incident, is being used to send a chilling message to protesters and to shape a dangerous narrative,” she wrote. “This is a challenging moment, but we must maintain the integrity of our message and moral movement.”

Eric Garner’s daughter, Emerald Garner, expressed support for the families of Liu and Ramos on Monday. She told ABC News she was “never anti-police,” and said Brinsley’s actions were “a mental health crisis” that “didn’t have anything to do with race.”

New York City Councilman Daniel Dromm (D)told HuffPost that the recent protests don’t contradict the outpouring of community sympathy for the slain officers. “Just because you are for police reform doesn’t mean you are anti-cop,” Dromm said. “We have to come together.”

Note: This article has been shortened from the original to focus on the actions of people in the movement against police brutality. There were other vigils held in NYC.