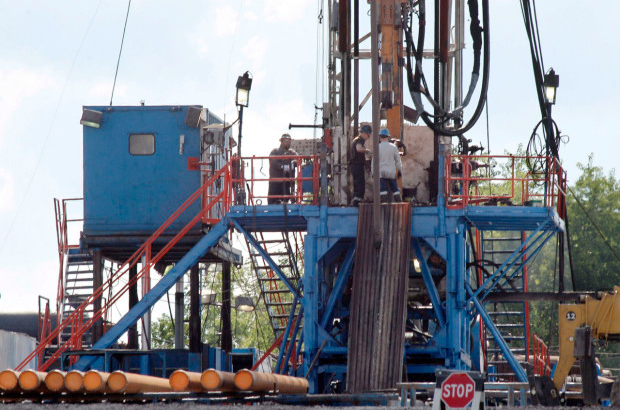 Above Photo: The Baker administration is counting on natural gas from Pennsylvania. In this 2012 file photo, a crew works on a drilling rig at a well site for shale-based natural gas in Zelienople, Pa. (Keith Srakocic/AP)

Earlier this month, the U.S. Department of Energy approved plans permitting companies to export gas from Massachusetts to Canada and beyond.

Opponents of the construction of two new natural gas pipelines in Massachusetts claim the DOE’s decision demonstrates that the state already has enough natural gas and doesn’t need new pipelines.

But proponents say building the new pipelines — costing $8 billion — will actually save ratepayers money and secure the region’s energy future.

Mark Twain once quipped, if you don’t like the weather in New England, wait a few minutes.

Today, Twain might say that about the price we pay to keep the lights on. The cost for electricity is as mercurial as the temperature. The wholesale price for power changes every five minutes, reflecting the constantly shifting demand for electricity and the supply of natural gas.

Sixty percent of the state’s electricity comes from burning natural gas — four times what it was just 15 years ago. And as old, unsafe, unprofitable and polluting power plants are retired, our dependency on gas is growing.

Gov. Charlie Baker does want more hydroelectric power from Canada and wind-generated electricity from Maine, but the administration is counting on natural gas from Pennsylvania to carry most of the load.

There’s plenty of gas in shale formations there, and in just eight years the use of new hydraulic fracturing technology has transformed the U.S. from a natural gas importer to the largest producer in the world.

Still, Beaton says there’s no way to satisfy the state’s growing appetite for gas. “Our region is starved and it’s really hampering our economic development,” he said.

The answer, he says, is more natural gas pipeline. Proponents say bringing in more shale gas could save Massachusetts consumers $1 billion a year.

“We’re not saying any one pipe is the solution, but Massachusetts does need an additional pipeline, and it’s not only an opinion shared by this administration, but the large majority of New England states,” he said.

Massachusetts Attorney General Maura Healey, on the other hand, questions the need for more pipelines.

“Who’s going to benefit from this new energy source? Massachusetts is at a really important crossroads, and when it comes to making decisions about our energy future, we need to take the time to get it right,” she said.

As the state’s consumer advocate-in-chief, Healey commissioned a study that concluded that more pipelines are a permanent $8 billion solution to a temporary problem. Healey says energy efficiency and renewable sources can handle gas shortfalls that occur for just a few hours on a handful of the coldest days of the year.

“My concern is making sure electric ratepayers aren’t going to be stuck with a big bill for building out new gas pipeline infrastructure,” she said.

“She’s right. This particular pipeline is only being built to satisfy profiteers who want to export to Europe,” said attorney Vincent DeVito, who represents Northeast Energy Solutions, a coalition of environmental and land trusts in the region opposed to the pipeline that the Texas-based company Kinder Morgan wants to build through southern New Hampshire and northern Massachusetts.

While the documents don’t tie the company directly to exports, DeVito says they show Kinder Morgan has only found buyers for half the gas its proposed pipeline can carry.

“This particular pipeline doesn’t fit any need in our state,” DeVito said.

In its filing with federal regulators, Kinder Morgan says it plans to use the new pipeline to deliver gas to a terminal in Dracut, but DeVito claims most of the fuel will wind up being exported to Canada and beyond by reversing the flow of an existing pipeline.

This month the Department of Energy granted two companies permission to use the pipeline to export gas from Dracut to Canada, where the gas would be turned into a liquid and then reexported on special tankers to nations around the world — in effect, floating international pipelines.

“It proves what a lot of people suspect all along,” DeVito said. “Even though Kinder Morgan never fessed up to it, it really is an export project.”

But Kinder Morgan denies this.

“The key thing is, we don’t have any [liquefied natural gas] contracts,” said its communications director, Richard Wheatley. “As an open access pipeline, we provide access and capacity and it’s up to the customers and shippers where they want to move gas from point A to point B.”

The Canadian companies that were granted permission to export gas coming from Massachusetts won’t say more. And that doesn’t sit well with U.S. Sen. Edward Markey. He calls the gas export decision “a disaster.”

“The companies proposing these pipeline projects need to be more honest about the ultimate fate of the gas that would be transported through Massachusetts,” the Democratic senator said. “This LNG export strategy will harm our consumers and not help.”

The Department of Energy contends LNG exports will benefit the nation’s overall economy but acknowledges there will be winners and losers.

Who Wins? Who Loses?

Exporting gas will increase prices domestically and everyone will pay higher utility bills here. That will hurt fixed income wage earners the most. But those with investments in energy companies — typically the richest among us — stand to gain.

In the past if a company wanted to build a pipeline in Massachusetts it would finance the upfront cost, but recently the state Department of Public Utilities approved a special tariff that would shift the expense of constructing gas pipelines to electricity ratepayers.

“Electric customers have never been asked to pay for gas pipelines before and if it turns out in five or 10 years that that was a bad bet, well, too bad, we’ve already paid for it,” said Peter Shattuck, director of the Clean Energy Initiative at the environmental organization Acadia Center. “The real risk is that forcing the public to underwrite gas pipelines carries enormous risks for the climate and consumers if exports link us to higher-priced global markets.”

But Energy Secretary Beaton says state regulators will protect ratepayers. They want to require electric companies that want new pipeline to sign long-term contracts for the capacity. That’s new in an industry where wholesale electricity rates change every five minutes.

“This administration will build in safeguards and make sure that any pipeline to be built in the commonwealth will see a net savings to our ratepayers,” Beaton said of the cost of building gas pipelines in the state.

But that may be a difficult promise for the state to keep. Interstate and international pipelines are regulated by the federal government.

On Thursday, state regulators hold a hearing in Boston to find out what friends and foes think about their plan to socialize the future cost of building gas pipelines.