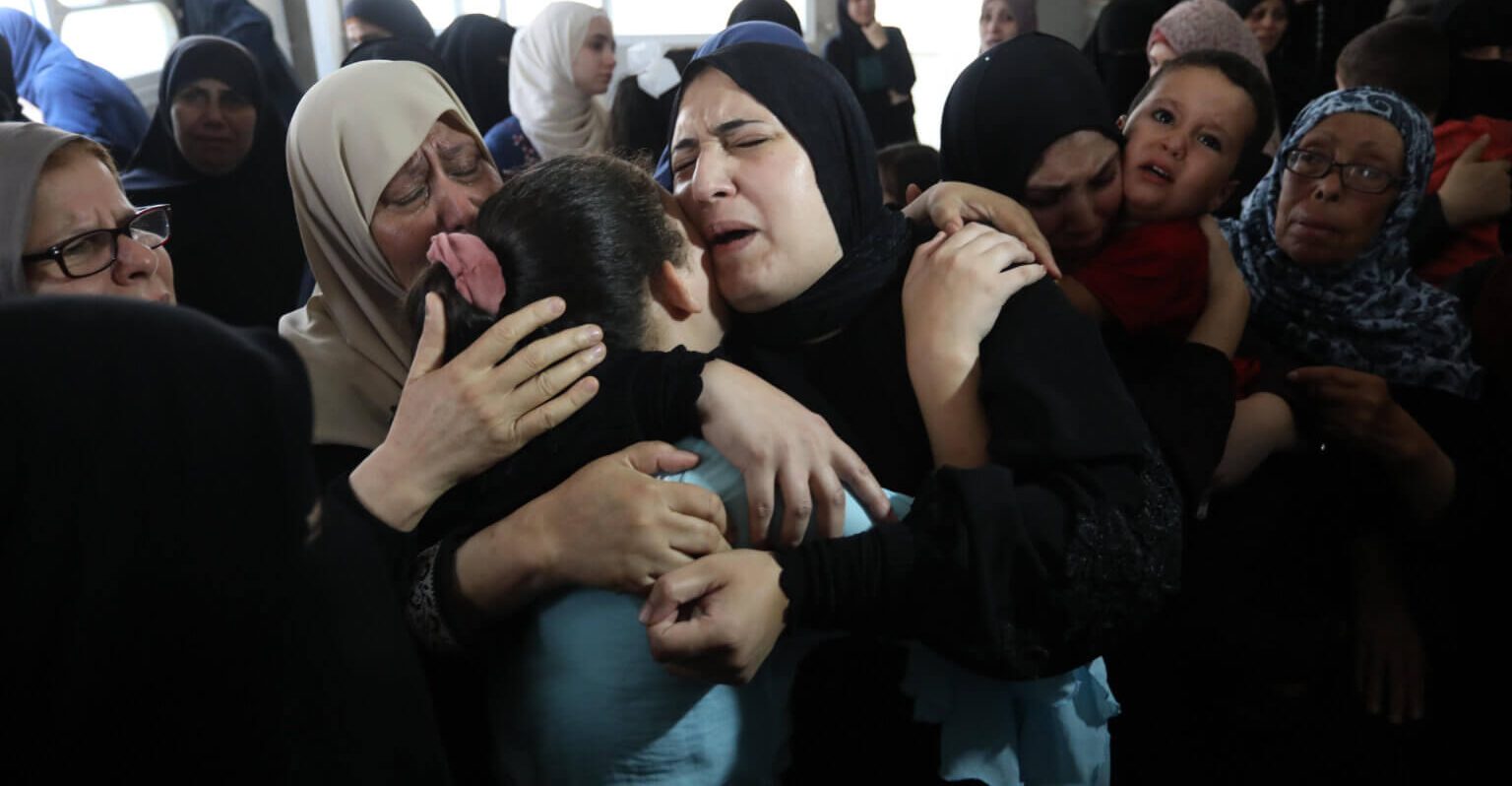 Above photo: Mourners attend the funeral of 7 Palestinians killed in Israeli air strikes on Rafah on August 7, 2022. Ashraf Amra/APA Images.

Reports: Ceasefire to go into effect at 11:30pm local time

An Egyptian-brokered ceasefire is expected to go into effect at 11:30pm local time (20:30 GMT). Palestinian Islamic Jihad announced the ceasefire in a statement, adding that they have a right to “respond to any Zionist aggression.”

Mondoweiss correspondent in Gaza Tareq Hajjaj reported that Israeli airstrikes were ongoing in the last hour leading up to the ceasefire.

The Times of Israel reported that Israel agreed to the ceasefire, and that Egypt was working to ensure two of PIJ’s principal demands, including the release of Palestinian hunger-striking prisoner Khalil Awawdeh and recently detained PIJ leader Bassam al-Saadi.

It remained unconfirmed if Israel had agreed to the PIJ demands.

Reporting from Gaza City, Mondoweiss correspondent Tareq Hajjaj says the situation in Gaza is “more dangerous than ever,” despite reports of an imminent ceasefire.

“People in Gaza know for fact that Israeli warplanes blindly target Palestinians right before ending the attack. Speaking about a ceasefire makes it even worse when it doesn’t come for sure.

The strip is covered with darkness all over. The power is not available and the bombs never stop. It’s a terrifying moment for Palestinians in Gaza tonight. Some families in al-Shuja’iyaa packed their bags and sit in front of their homes waiting to flee the moment  it gets more dangerous.

People all over the strip are holding their phones and radios, listening to the news, desperately waiting for  the moment that a ceasefire will be announced,” Hajjaj said.

Om Khaled, 54, evacuated her home on Friday with her seven kids, and has been sheltering in Hajjaj’s since. “We want to get home, we hope this war will end without losing it, I feel homeless,” she told him.

The Gaza Health Ministry reported at 9:20pm local time that 43 Palestinians, including 15 children, have been killed in Gaza since Israel began airstrikes on the besieged strip on Friday.

The death toll in Gaza climbed to 36 on Sunday night, including 15 children, according to the Gaza Ministry of Health.

Five Palestinians were killed Sunday evening in the al-Falouja area of the northern Gaza Strip. The five were reportedly all children and minors, including four from the same family. Their names and ages remained unconfirmed.

Two other airstrikes were reported after 8:00pm local time, including a strike on a home in the al-Bureij refugee camp in central Gaza that killed four people, including three siblings. Their father was reported to be in critical condition.

The second strike was reported to have targeted a car on the Omar al-Mokhtar street in Gaza City. Three Palestinians were killed in the strike.

311 Palestinians have been injured since Israel launched its offensive on the Strip on Friday.

Israeli Prime Minister Yair Lapid reportedly told the mayors of southern Israeli towns that Israel “achieved its goals” in the three days of its offensive on the Gaza Strip, which the state has deemed ‘Operation Breaking Dawn’.

The Times of Israel reported that Lapid told officials that “there was no benefit to continuing Operation Breaking Dawn.”

Several hundred Palestinians participated in a rally in Ramallah’s city center in protest of Israel’s latest assault on Gaza, as well as the escalations against Palestinians in the occupied West Bank.

The rally showed an array of Palestinians from various backgrounds and political factions, including Fatah- commonly an opposing faction to Hamas and Islamic Jihad.

PIJ: Any ceasefire agreement must include demands of resistance

According to local reports, the leader of the Palestinian Islamic Jihad’s politburo, Anwar Abu Taha, stated that any agreements brokered by mediators must “include the demands of the resistance.”

He added, “any ceasefire without the ending of the assault on Gaza, and the suspension of the assassinations and arrests as well as the release of Khalil Awawdeh and Bassam al-Saadi is meaningless.”

Awawdeh, 40, from Hebron in the occupied West Bank has been on hunger strike for nearly five months as he continues to be arbitrarily held in Israeli prisons with no charge or trial. Al-Saadi, 65, is one of the Senior PIJ leaders in the West Bank. He was arrested in Jenin by Israeli military amid recent intensifications, in the process killing a 17-year-old teen.

Abu Taha also stated that mediating parties must provide assurance that the Israeli occupation ceases to pursue and arrest PIJ members in the West Bank.

An Egyptian delegation arrived in Gaza earlier on Sunday as part of an ongoing effort to broker a ceasefire between the Israeli military and Palestinian Islamic Jihad.

Reports say that Egypt will announce an update at 17:00 GMT, though Israel and PIJ have not yet confirmed any agreements.

Saraya Al-Quds, the armed wing of the Palestinian Islamic Jihad, said in a statement that it had targeted and fired several rockets at a reception tower in the Israeli military Kibbutz, Nahal Oz, near Gaza.

Meanwhile the Israeli defense ministry said that a moratr fired by Palestinian groups in Gaza struck the Erez border crossing between Gaza and Israel, causing material damage. The crossing, along with all other points of entry and exit into Gaza, have been completely sealed for days now in the lead up to Operation ‘Breaking Dawn’.

No casualties were reported.

Spokesperson of Saraya Al-Quds, ‘Abu Hamza’, released a statement on Sunday afternoon calling on all Palestinians across the West Bank and historic Palestine “to engage in this battle, dubbed ‘United Arena’. Let it be an uprising which becomes the basis for the demise of this enemy.”

Hamas declared one of its fighters killed in Jabalia

In a statement Hamas confirms the killing of one of its fighters, Ahmad Mohammad Afaneh, from Jabalia in northern Gaza during the current Israeli onslaught on the Strip.

The Ministry of Construction in Gaza said in a statement that 1,400 houses in Gaza were partially destroyed during the current Israeli offensive. 70 housing units were “severely destroyed” and deemed “unfit for habitation”, while 17 houses were completely destroyed.

Mondoweiss Gaza correspondent Tareq Hajjaj, reporting from Gaza City, said that dozens of families in the city’s Shuja’iyya neighborhood were fleeing their homes and seeking shelter in other areas across the city and the besieged territory.

“The situation on the ground is getting worse. The streets are empty, and people expect this round will take a long time to end,” Hajjaj reported.

The death toll in the Gaza Strip rose to 31 Palestinians, including six children, on Sunday afternoon, following two days of Israeli airstrikes on the besieged territory.

The Gaza Ministry of Health reported that in addition to the deaths, 275 civilians have been wounded. At least seven percent of those injuries are reported to be critical.

In the southern Gaza Strip town of Rafah, Palestinian first responders worked overnight to remove people from the rubble of a home that was bombed in an Israeli airstrike. At least seven dead Palestinians, including a child and two women, were pulled from the rubble.

The Ministry of Construction in Gaza stated at around 2:50 p.m. local time that 1,400 houses have been partially destroyed, 70 housing units were severely damaged and deemed unfit for habitation, and 17 houses were destroyed completely.

The airstrike on Rafah targeted the home of Khaled Mansour, a senior leader of the Islamic Jihad movement in Gaza. He was also killed in the attack.

The Al-Quds Brigades, Islamic Jihad’s military wing, continued its retaliatory rocket fire out of the Gaza Strip into Israel. The group also said that it fired rockets towards occupied Jerusalem on Sunday afternoon. The Israeli army said in a statement that its Iron Dome weapons system intercepted 97% of rocket fire from Gaza.

No Israeli casualties have been reported since the Israeli offensive on Gaza began on Friday, August 5th.

The Gaza Health Ministry warned on Sunday that Gaza’s hospitals will run out of fuel reserves in 48 hours, causing hospitals across the territory to shut down.

A statement by the ministry said that only 48 hours remain to “run without fuel needed to sustain operations of the standby generators in the hospitals.”

Gaza’s Health Ministry spokesperson Ashraf Al-Qedrah told Mondoweiss that “services at Gaza hospitals will be badly affected and paralyzed if this crisis does not end.”

Gaza’s sole power plant shut down on Saturday due to fuel shortages, after days of Israeli closures of the Karam Abu Salem crossing into the territory, the sole entry point for fuel into Gaza.

Prior to launching “Operation Breaking Dawn” on Friday, the Israeli government had sealed off the crossing for days, exacerbating the existing fuel shortages in Gaza.

Hundreds of Israeli settlers stormed the Al-Aqsa Mosque compound in occupied East Jerusalem on Sunday, under the protection of Israeli police forces.

Over 1,300 settlers reportedly stormed the compound in groups as part of the Tisha B’Av Jewish holiday, during which Jews commemorate the destruction of the ancient temples in Jerusalem.

The settlers performed prayers and other rituals at the compound in violation of the status quo at the holy site, which prevents non-Muslim worship. Among the Israelis who raided the site was far right Israeli lawmaker Itamar Ben Gvir of the Otzma Yehudit party, who routinely makes provocative trips to the site and other Palestinian areas in occupied Jerusalem.

Israeli forces were reported to target Palestinian journalists covering the settler raid of the Al-Aqsa compound. The Palestinian Journalist Syndicate condemned the assault.

Palestinian photojournalists Mohammad Ashoo and Ahmad Gharbali were detained and released. Three other journalists were assaulted by Israeli forces in the Old City.