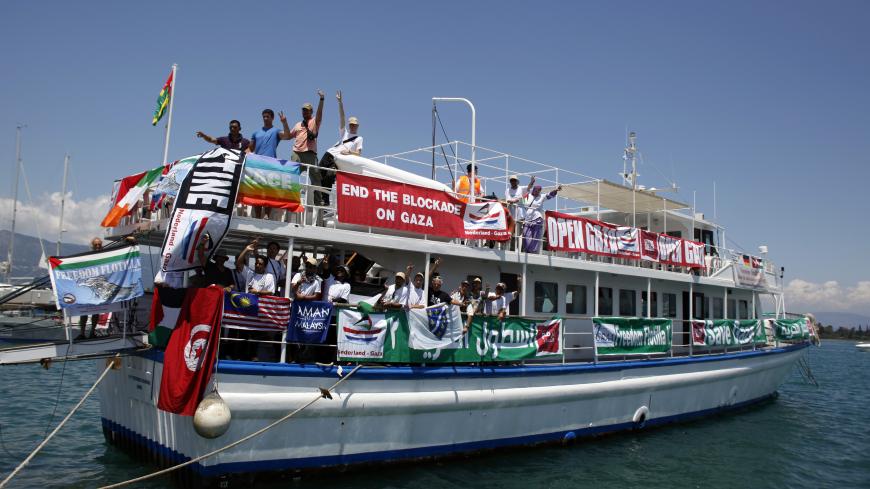 As the Israeli State intensifies its violence against and displacement of Palestinians from their homes, international Palestinian solidarity organizations are making new plans to challenge the illegal Israeli occupation. Clearing the FOG speaks with retired Colonel Ann Wright who recently represented the US Boats to Gaza campaign at a meeting of the Gaza Freedom Flotilla Coalition in the United Kingdom. Ann Wright has participated in five trips to confront the blockade of Gaza and deliver desperately-needed supplies, including when Israeli Occupying Forces attacked the ships and killed ten civilians. Wright talks about the new plans for 2023, the dire conditions that Palestinians experience in Gaza and what people in the United States can do considering that the US provides financial support and political cover for Israel’s atrocities.

Col. (ret.) Ann Wright spent 29 years in the U.S. Army and Army Reserves. In 1987, Col. Wright joined the Foreign Service and served as U.S. Deputy Ambassador in Sierra Leone, Micronesia, Afghanistan, and Mongolia. She received the State Department’s Award for Heroism for her actions during the evacuation of 2,500 people from the civil war in Sierra Leone, at the time the largest evacuation since Saigon. She was on the first State Department team to go to Afghanistan and helped reopen the Embassy there in December 2001. Her other overseas assignments include Somalia, Kyrgyzstan, Grenada, Micronesia, and Nicaragua. She has an MA a law degree from the University of Arkansas, and an MA in national security affairs from the U.S. Naval War College.

On March 19, 2003, the eve of the U.S. invasion of Iraq, Ann Wright cabled a letter of resignation to Secretary of State Colin Powell, stating that without the authorization of the UN Security Council, the invasion and occupation would be a violation of international law. She was one of only three persons who resigned from the U.S. government in opposition to the Iraq war. Since then, she has been writing and speaking out for peace.  Ann Wright is on the national staff of CODEPINK.

Ann Wright fasted for a month, picketed at the US prison at Guantánamo, Cuba, served as a juror in Bush “mock” impeachment hearings, traveled to Iran as a citizen diplomat, and has been arrested numerous times for peaceful, nonviolent protest of Bush’s policies, particularly the war on Iraq. She has also been on delegations to Iran.

She has travelled to Gaza three times in 2009 following the Israeli attack on Gaza that killed 1,440 and wounded 5,000. She also visited Gaza in 2011 and 2012. She was an organizer for the 2009 Gaza Freedom March that brought 1,350 persons from 44 countries to Cairo, Egypt, in solidarity with the people of Gaza.

She was on the May, 2010 Gaza flotilla that was attacked by the Israeli military and was an organizer for the 2011 US Boat to Gaza, The Audacity of Hope and a boat leader on the 2015 Gaza Freedom Flotilla. Within days following the Israeli attack on Gaza in 2012, she helped organize a delegation to Gaza. In 2013, she was a delegate on the 100 woman group to Gaza for International Women’s Day which was stopped by the Egyptian government. She was a boat leader on the 2015 Gaza Freedom Flotilla and was a boat leader of the Zaytouna, the Women’s Boat to Gaza in 2016.

She has travelled to Afghanistan, Pakistan and Yemen to talk with families whose family members have been killed by US assassin drones. She has been arrested in New York and Nevada at US drone bases for protesting US killer drones.

She was a delegate on the 2015 Women Cross the DMZ which featured peace conferences in both North and South Korea. She has traveled to Jeju Island, South Korea three times in solidarity with opponents of a naval base being constructed to port ships carrying the US aegis missile offense system. She has been on two speaking tours in Japan in defense of the Article 9 anti-war part of the Japanese constitution. She has been a guest speaker on the Peace Boat in a trip through Northeast Asia.

In 2016, she was in Standing Rock, North Dakota in solidarity with native Americans in attempting to stop the Dakota Access Pipeline.