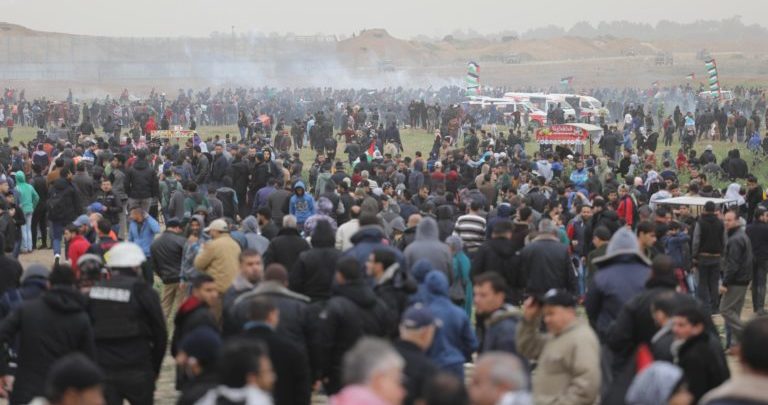 “We thirst for dignity.”

Human waves flooded the Israel-Gaza fence beginning Saturday morning marking the first anniversary of the Great March of Return protests, facing off against Israeli forces behind the fortified barbed-wire fence. The demonstrators gathered despite rain, and even as Egypt is seeking to mediate a deal to end the blockade of Gaza.

For the fifty-second week in succession, Israeli military’s tear gas canisters, live rounds and rubber bullets broke into the shouts of demonstrators, more than 40,000 (according to Israeli army), gathering at several locations along the border. Three Palestinians were killed and more than 200 others injured.

In the year since the protests started, at least 267 Palestinians have been killed by Israeli forces, according to Gaza’s health ministry.

The rallies have been held every week since March 30 last year. Palestinians want an end to the Israeli occupation of their lands. They also demand the return of the Palestinian refugees to their homeland.

On the eve of the protests, Israeli soldiers and tanks were deployed near the fence separating the occupied territories from the besieged Gaza Strip.

The reinforcements were deployed on Friday morning. Gaza medical officials said later in the day that Israeli troops shot and wounded 10 Palestinians on the Gaza perimeter fence on the day.

“Their (Israelis) tanks and warplanes no longer scare us” said Saber al- Ashqar, 35. A double amputee, he kept three fist-size-rocks between his thighs to hurl them by a slingshot towards the hidden soldiers. “We are not hungry for food; we thirst for stolen freedom and dignity.”

Al-Ashqar, a father of four sons, injured in an air strike in 2008 war on Gaza, said he could be the successor to Ibrahim abu Thuraya, a wheelchair-bound activist who was shot dead in December 2017 by Israeli snipers as he protested against the US decision to recognize Jerusalem as Israel’s capital.

“Jerusalem must be restored,” al- Ashqar said. Israel is not deceiving Palestinians by allowing more goods into Gaza, or expanding the fishing zone off the coast. “Who said we need ‘Ghobbos’ [the name of a popular fish in Gaza] or Nutella jars,” he told Mondoweiss.

Meanwhile, Hamas, which rules Gaza, had pledged to keep the crowds a safe distance from the fence as Egyptian mediators were working to cement a deal that Hamas hopes will ease a crippling Israeli-Egyptian blockade of the crowded territory.

Khalil al-Hayya, a senior Hamas official, said the group had received “positive signs” from the Egyptians. He added that the Egyptian team was to return to Israel on Sunday to continue the talks. “We will continue our marches until all our goals are achieved,” he said.

Despite heavy rain, Asad Zaneen, 26, a truck driver, was heading by crutches toward the fence, shouting: “No more fear! Why are you scared? Go closer my friends!”

“I will not go back until our depressed people gain their rights, so nothing will force me going back even if I lost my four limbs,” Zaneen said. He was shot in the leg by an explosive bullet last January.

“Next month I will complete three years of unemployment,” said Madeeha abu Aljabeen, 26, a nurse and mother of an infant. “For sure, Israel is responsible for that.”

Madeeha and her 59–year-old mother, Rabeeha, have experienced the same frustration, and they believe the majority of the protesters share “deep wounds” to the heart.

“We always predict the worst, as wisdom is absent,” Rabeeha said. “Feelings explode, as grenades do.”

Her daughter added: “Who knows how many months or years should we count to touch a real improvement in our people’s life? Therefore, it seems there is no alternative but to continue demonstrating to mark second and third anniversaries of the protest.”