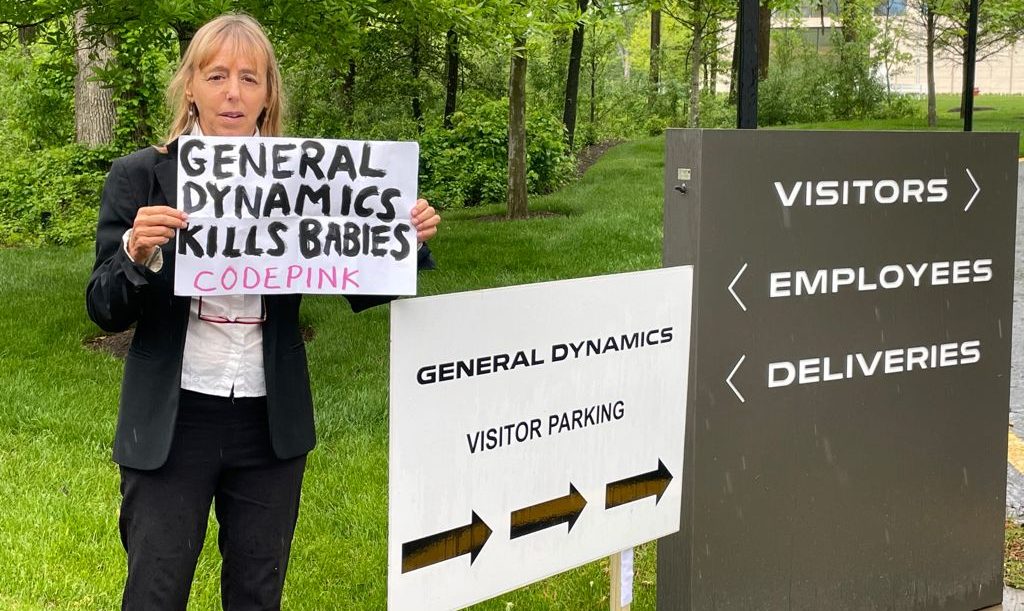 General Dynamics Board Shuts Down Demand For Transparency

On May 4, General Dynamics held its annual shareholder meeting. This meeting took place virtually, possibly in response to last year when shareholders were able to directly engage with the General Dynamics Board and ask how they justify the destruction and death their weapons cause. CODEPINK co-founder Medea Benjamin was able to use her shareholder question last year to ask CEO Phoebe Novakovic how she justifies making $21 million a year while, years earlier, a 2,000 lb. General Dynamics bomb hit a Yemeni marketplace and killed 97 civilians (including 25 children). This year’s shareholder meeting was completely online, with only audio broadcasted and no video shared, no chat function, and a question submission box that was disabled halfway through the meeting. This platform allowed General Dynamics to speed through the 24-minute meeting with no pushback, criticism, or engagement from the shareholder attendees – and this approach extended to the proposals section.

During this section there was a very notable proposal introduced by the Franciscan Sisters of Allegany, NY requesting that the General Dynamics Board of Directors prepare a human rights report. The proposal points out that General Dynamics’ products and services are used by Saudi Arabia, the United Arab Emirates, Bahrain, Egypt, Israel, and U.S. government agencies at the U.S.-Mexico border. As General Dynamics’ weapons are used in war crimes and human rights violations against Yemenis, Palestinians, asylum-seekers and beyond, this proposal rightfully calls for General Dynamics to develop and provide transparency on their process to address and remedy the “actual and potential human rights impacts associated with high-risk products and services.”

General Dynamics roundly rejected this proposal and unanimously recommended a vote against it. They stated that they already have a “rational and principled” human rights strategy – never mind that their strategy includes no commitment to addressing the human rights impacts of their lethal weapons. As Danaka Katovich lays out in her recent Jacobin Article, a 2019 Amnesty International report found that General Dynamics did not even measure up to its human rights due diligence responsibilities.

General Dynamics added that not only was this proposal unnecessary, it was harmful and would “undermine shareholder value” by attempting to “embed radical skepticism toward U.S. foreign policy.” In the shareholder meeting itself, CEO Novakovic stated that “we have supported the U.S. government’s foreign policy, and we will continue to do that – if that is at odds with anyone else’s view, that is something you should take up with your Representative. But that is not appropriate to ask at this meeting.”

General Dynamics’ response to this human rights proposal painted a clear picture: a corporation that is just doing its job by supporting the policies and needs of the U.S. government. However, the lobbying practices of General Dynamics and other top defense contractors paint a different picture.

General Dynamics is part of a proud defense contractor tradition of spending millions of dollars each year on lobbying to shape U.S. policy. And, as Open Secrets points out, this strategy pays off. Weapons manufacturers have spent more than $2.6 billion on lobbying in the past two decades, and have been rewarded with “half of the $14 trillion allocated to the Department of Defense (DOD) during that time.” For every $1 Lockheed Martin spent on lobbying in 2020, they received $5,803 from DOD contracts.

General Dynamics’ claim that their “North Star is the law and policy of the U.S. government” fails to mention that they spend millions annually to shape U.S. law and policy to their benefit. While defense contractors like General Dynamics hide behind the guise of supposedly impenetrable U.S. foreign policy, they have already spent almost $2.9 million on lobbying efforts in the first quarter of this year alone.

It’s time to stop buying the lie that corporate accountability for war crimes and human rights violations is really an attempt to “embed radical skepticism toward U.S. foreign policy.” Defense contractors like General Dynamics may hide behind the veneer of serving the U.S. government, but they ultimately only care about selling weapons and making substantial profits – and they shape our legislation towards that goal. It is against their self-interest to provide transparency around their human rights practices, because the more weapons they sell, the better – and they don’t care who they sell them to.

That is why now is a critical time to focus on pulling money away from these weapon-manufacturing corporate behemoths. Divesting money from weapons manufacturers, whether that is through divesting your church, university, or city budget, not only pulls financial resources from these death-dealing corporations but also demonstrates to them that there are dissenting communities across the U.S. who do not believe their lies about “just doing their jobs.” Pushing your Congressional representative to divest from war by refusing to take campaign contributions from weapons manufacturers is another powerful way to disrupt weapon manufacturers’ manipulation of U.S. policy for their own profit.

Militarized violence across the world in Ukraine, Yemen, Myanmar, Somalia and beyond is overwhelming – and so is the immense profit that weapons manufacturers are making from this violence. But we all have more power than we think, and an important first step for building a demilitarized future is pulling away money – and power – from these weapons manufacturers.