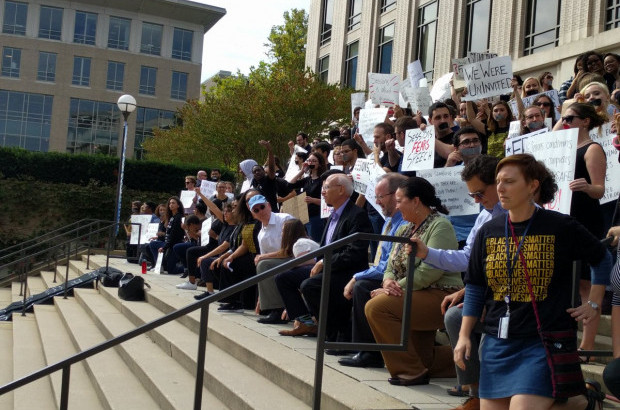 Above Photo: From huffingtonpost.com

“This kind of government chilling of speech is precisely what the First Amendment to the United States Constitution is meant to prevent.”

In what may be a first, a style of protest that started in the NFL has spread directly to … Georgetown Law.

Faculty members at the prestigious law school took a knee Tuesday morning in dissent of a visit by Attorney General Jeff Sessions, who was on campus to “give remarks about free speech.”

Georgetown Law faculty arrives to take a knee in protest of Sessions’ appearance on campus. pic.twitter.com/aOEaUgAQAJ

Professors at the school have vociferously opposed the visit by Sessions. In an open letter published ahead of the event, signed by around a third of the law school’s faculty, professors lambasted it as “hypocritical” and “troubling.”

“We, the undersigned, condemn the hypocrisy of Attorney General Sessions speaking about free speech,” the letter reads. “Sessions is a key cabinet member in an administration headed by a President who spent last weekend denouncing athletes engaging in free expression and calling for them to be fired.”

“This kind of government chilling of speech is precisely what the First Amendment to the United States Constitution is meant to prevent,” the letter continues. “A man who fails to recognize paradigmatic violations of the First Amendment is a poor choice to speak about free speech on campuses.”

The protest was popularized by former San Francisco 49ers quarterback Colin Kaepernick, who opted to kneel during the national anthem before football games to raise awareness of racial inequity and police brutality in America.

Rather than acknowledge the gesture as free speech, President Donald Trump labeled players who protest “sons of bitches” and called on the league to “fire or suspend” them.

In response to Trump’s remarks, around 150 NFL players took a knee or engaged in some other form of protest last weekend during the pre-game national anthem.