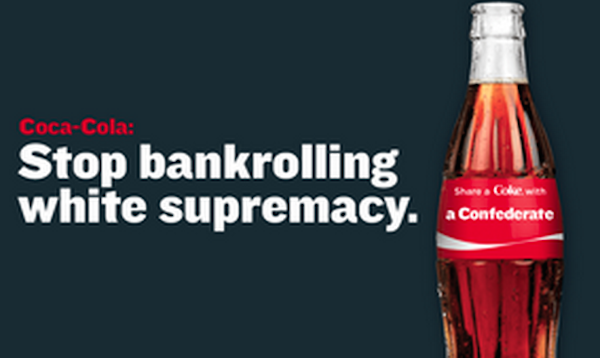 At a towering 1,600 feet, Stone Mountain is a majestic outgrowth from the suburbs of Atlanta. Less majestic, for many, is the three acre bas-relief monument to the Confederacy on its north side. Originally forged by Mount Rushmore creator Gutzon Borglum, the project was abandoned over creative differences in the 1920s, only to be completed once Stone Mountain’s grounds were purchased by the state of Georgia in 1958. The carving memorializes Confederate president Jefferson Davis, and the famed secessionist generals Thomas “Stonewall” Jackson and Robert E. Lee, who led the charge to maintain slavery in the South. Fittingly, Stone Mountain has long been a home to the South’s nostalgic white supremacists, and in 1915 became the birthplace of the second iteration of the Ku Klux Klan.

But what might seem an obviously anachronistic tribute to bigotry and racist violence is thought of by thousands of tourists each years as another stop in a busy travel itinerary. Last Saturday, Stone Mountain visitors found their view obstructed by a 9-by-15-foot banner reading “Heritage Of Hate: Coca-Cola Supports Racism.” Written in the company’s familiar white-on-red scrawl, the display was part of an ongoing campaign pressuring Coca-Cola to drop its sponsorship of the park and — by extension — the legacy of hatred that lives on there to this day.

The Georgia group behind this effort was Rise Up, a membership-based organization founded last October as protests rolled through the country following Mike Brown’s murder and the non-indictment of his killer. Tapping into the energy of the movement for black lives, the group is now working to build a statewide base of members and supporters with campaigns for workplace justice, public education and an end to police brutality. “We’re young communities of color, LGBTQ folks, struggling on the frontlines of crisis in Georgia,” explained founder and co-director Nelini Stamp. “We believe that if we organize those folks who are going to make a majority soon in this state, we believe that we can bring not just progressive change, but actual radical change in the state.”

National debates on the continued use of the Confederate flag have sparked a backlash throughout the South, where whites have rallied in support of the symbol. But as Stamp points out, pro-flag rallies have at least as much to do with the movement for black lives as the symbol itself. “In different parts of the state, folks have been going through towns in the middle of the night, running their Confederate flags through town,” she said. In late July, three Confederate flags were placed on the federal lands on Ebenezer Baptist Church, the historic congregation where Martin Luther King Jr. took up the pulpit.

Unsurprisingly, Stone Mountain has become a gathering point for a new generation of white nationalists, who have no qualms about brandishing automatic weapons in support of their cause. After Rise Up members showed up to demonstrate against an August 1 pro-flag rally on park grounds, they faced threats of violence from white supremacist groups in-person and online. One posted a Rise Up member’s name, home address and phone number to Facebook.

“The battle in Georgia is not about the Confederate flag,” Stamp said. “This is about serious threats that were made, serious actions that have been taken to uphold and cherish a legacy of racial violence and white supremacy.”

Because of this tense, often violent atmosphere, white Rise Up members chose to hold up the banner last Saturday, when they held their action at the site of another pro-flag rally. Both of the people keeping the banner in place either had ancestors who owned slaves or had fought in the Confederacy. Anne Simonton, one of the two activists, wrote in a statement that, “[t]he flag wavers do not own our history … we have to do better than the legacy of racial violence that we inherited, which continues to destroy black lives today.” And while pro-Confederate flag ralliers’ illegal automatic weapons have become a regular fixture of Stone Mountain Saturdays, Simonton and company were told that their balloons violated park policy.

Coca-Cola is a major funder of Stone Mountain, supplying refreshments and major financial support to the park’s grounds and events. This summer, the company is offering a discounted rate on “adventure passes” into Stone Mountain. They also help support the Lasershow Spectacular in Mountain Vision, a weekly light show on the face of the bas-relief featuring a several minute tribute to the Confederacy — set, of course, to the tune of Dixie. Lacking much of a sense of irony, the company also opened aCenter for Civil and Human Rights on its grounds in 2007.

Part of the logic behind Rise Up’s campaign is that Coca-Cola has pulled its corporate weight before. Back in 2014, they joined fellow members of the Atlanta Metro Chamber of Commerce in putting a stop to Georgia’s own religious freedom bill that, like Indiana’s and Mississippi’s, would have allowed business owners to refuse service to customers on the basis of their sexuality. Home to Delta Airlines and Home Depot, Stamps said that “Atlanta is the corporate powerhouse of the South,” and state politicians are eager to maintain strong ties to some of their most well-funded corporate constituents. In targeting Coke, she explained, “We figured let’s go back to the corporations that run this state so that our state legislature actually takes this seriously.” Conveniently, the Chamber of Commerce is located inside of Coke’s corporate headquarters. Rise Up has also partnered with Color of Change to circulate a petition targeting Coke that, to date, has generated over 6,100 signatures.

“In our minds,” Stamp said, “[Coca-cola is] sharing a Coke with Robert E. Lee before they are sharing a Coke with Bayard Rustin.” Coupled with a robust base-building program, Rise Up’s targeting of Coca-Cola presents one model for channeling movement moments into long-term community power — and tearing down tributes to an ugly history.