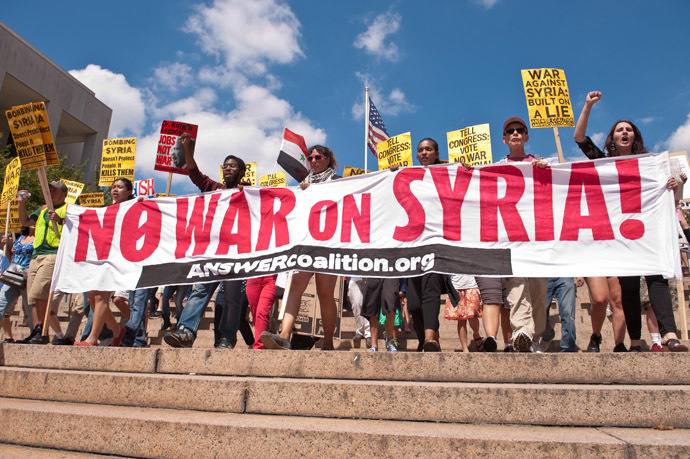 A anti-Syria strike demonstration in LA. German paper Bild am Sonntag has cited information saying the Syrian president did not personally order chemical attacks, but this does not exonerate his regime. Photograph: David Mcnew/Getty

President Bashar al-Assad did not personally order last month’s chemical weapons attack near Damascus that has triggered calls for US military intervention, and blocked numerous requests from his military commanders to use chemical weapons against regime opponents in recent months, a German newspaper has reported , citing unidentified, high-level national security sources.

The intelligence findings were based on phone calls intercepted by a German surveillance ship operated by the BND, the German intelligence service, and deployed off the Syrian coast, Bild am Sonntag said. The intercepted communications suggested Assad, who is accused of war crimes by the west, including foreign secretary William Hague, was not himself involved in last month’s attack or in other instances when government forces have allegedly used chemical weapons.

Assad sought to exonerate himself from the August attack in which hundreds died. “There has been no evidence that I used chemical weapons against my own people,” he said in an interview with CBS.

But the intercepts tended to add weight to the claims of the Obama administration and Britain and France that elements of the Assad regime, and not renegade rebel groups, were responsible for the attack in the suburb of Ghouta, Bild said.

President Barack Obama is urging the US Congress to approve military action to deter the Syrian regime from using chemical weapons and degrade its ability to pursue the two-and-a-half-year civil war against rebel forces.

But Obama is facing stiff resistance from Democrats and Republicans in the House of Representatives, who fear involvement in another Middle East war, and from Assad’s main ally, Russian president Vladimir Putin, who has said any military strikes conducted without prior UN approval would be illegal.

Speaking in Paris on Sunday during a European tour to rally support for military action, John Kerry, US secretary of state, said Washington did not rule out a return to the UN security council to seek backing for military strikes, once UN inspectors have completed an on-the-ground investigation of the 21 August attack. Their report is expected by the end of the week.

Obama’s main European ally, François Hollande of France, is under increasing pressure to seek a UN mandate for any military action in the face of opinion polls suggesting up to 64% of French people oppose air strikes. In a bid to gain the support of fellow EU countries, Hollande pledged at the weekend to take the UN investigatory report into consideration before acting. Hollande also suggested he might seek a UN resolution, despite previous Russian and Chinese vetoes.

“On President Hollande’s comments with respect to the UN, the president (Obama), and all of us, are listening carefully to all of our friends,” Kerry said after meeting Arab League ministers. “No decision has been made by the president.”

“All of us agreed – not one dissenter – that Assad’s deplorable use of chemical weapons, which we know killed hundreds of innocent people … this crosses an international, global red line,” Kerry said.

Kerry’s meeting with Arab ministers, including from Saudi Arabia, Egypt, Qatar and the United Arab Emirates, followed talks in Lithuania with European foreign ministers, who blamed the attack in Syria on Assad but, aware of overwhelming public hostility to an attack, refused to endorse military action. Germany‘s chancellor, Angela Merkel, who faces a general election in two weeks, led the charge to caution.

Only 12 of the G20 countries which held a summit in Russia last week have backed the US position.

Addressing a closed meeting of the German parliamentary committee last week, the BND chief Gerhard Schindler said his agency shared the US view that the attack had been launched by the regime and not the rebels. But he said the spy agency had not have conclusive evidence either way, German media reported.

Schindler said that BND had intercepted a telephone call in which a high-ranking member of Hezbollah in Lebanon told the Iranian embassy in Damascus that Assad had made a big mistake when he gave the order to use the chemicals, the magazine Der Spiegel said.

Schindler added that German intelligence believed Assad would likely remain in power for some time – irrespective of any potential US-led military intervention – and that the civil war could drag on for years.