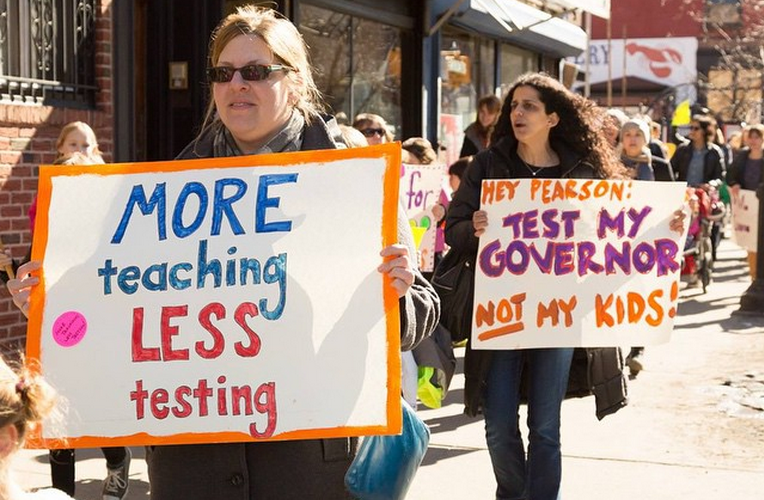 Get To Know The BATS: Teachers Fighting Privatization

Above photo: New York teachers and parents took to the streets in protest of an education budget they say furthers free market education reforms. (United Federation of Teachers / Instagram)

Editor’s Note: With the appointment of billionaire school privatization advocate Betsy DeVos to US Secretary of Education, the fight for education justice has stepped into hyper speed. We have never needed solidarity like we do now. Get to know one network of teachers who are partnering with others and taking things into their own hands.  – Simon Davis-Cohen

Chris Christie once told a Badass Teacher that he was “sick”of people like her. It was his response to the question posed by her sign: Schools in NJ are among the top 3 in the country. Why does Governor Christie portray our schools as failure factories?“You know what,”he said, “I’m tired of this. I’m so sick of you people. What do you want?”He pointed his finger in her face, “just go do your job.”

It was 2014, seven years into Melissa Tomlinson’s career as a public middle school special education teacher in Buena, NJ—and six months after the founding of the Badass Teachers Association (BATs) network.

Some might know BATs for their online activism and role in the campaign against Betsy DeVos. Organized horizontally through committees, we have chapters in every state, but all are autonomous to account for unique obstacles and local culture. For example, in Tennessee, BATs have to be able to work with Republican candidates while fighting against Achievement School District models, whereas California BATs focus more on Democrats in their campaigns to resist charters and privatization.

In the fight against charter schools, and cuts to public education and teacher pensions, in New Jersey, Tomlinson and other teachers are fighting for community control of education and against state takeovers of elected school districts.

We do more than tweet and post memes. After the bell rings, we can be found running for union and political office, spearheading campaigns against pro-charter school companies like Pearson and the Gates Foundation or testifying at school board meetings in cities and towns across the country.

Washington BATs have been working on a campaign to fully fund the public school system while conscientiously objecting to standardized tests. As an organization, BATs support any teacher that is willing to stand up and refuse to administer standardized tests by connecting them with others that have taken a stand and publicly praising their actions. New Jersey and New York BATs are also working on campaigns to refuse standardized testing and in Ohio there is a campaign against the state’s new graduation testing requirements.

On the national level, BATs in the National Education Association (NEA) and American Federation of Teachers (AFT) have caucused to hold the unions accountable and to push them to do better. For example, each year the NEA BATs work on business items that are debated on the NEA Convention floor and which set NEA policy for the coming year. In the past, NEA BAT caucus members pushed business items that lead to an updated climate change curriculum and which pushed forth revisions to NEA’s charter school policy. This year the NEA Convention is in Boston. The BAT Quality of Worklife Team, composed of BATs from across the country, worked with the AFT to produce a groundbreaking study on teacher stress, which resulted in an amendment (Section 2301 N of Title II) into the new ESSA federal education law that allowed Title II money to be used to study teacher workplace conditions.

The BAT network mobilized with protest, testimony and an Amicus Brief against the Supreme Court’s Friedrichs vs. California Teachers Association (2016), which could have gutted teacher and other public unions’power to collect agency fees and opened the door to national “Right to Work.” The decision ended in a 4-4 tie.

Teachers across the country are under attack. In Jersey, teachers have mandated contributions to a pension system that is not being funded by the state and NJ schools have lost billions in funding since governor Christie took office. Beyond the cuts, teachers’are being strong-armed to teach to the standardized Partnership for Assessment of Readiness for College and Careers (PARCC) exam. (By 2021 students will be required to pass the exam in order to graduate high school and teacher evaluations are tied to PARCC scores.)

Tomlinson teaches in a small rural South Jersey district, which has not felt the pressure of corporate education reform that North Jersey has. But it is building. In the south, teachers and parents formed South Jersey United, to work towards mobilizing the public around the effects of corporate education reform. They’re gearing up for an oncoming onslaught, which our urban districts have been under for some time through state takeovers of school districts, charter schools, and budget cuts.

This frontline is the top concern. In Camden, the power of the elected school district has been suspended. Many public schools have been closed and charter schools—free from elected school board oversight—have been opened. More schools are slated to be closed and the historic Camden High School is being slated for demolition. The promise of a new school to replace Camden High has been made, but that’s not what the community wants. The building is irreplaceable. Teachers and parents  are weary of being deceived, and for good reason. After Henry L. Bonsall Family School, East Camden Middle School, Francis X. McGraw Elementary School and Rafael Cordero Molina Elementary School received renovations in 2015, they were swiftly converted to charters, despite the community’s fierce opposition. Camden High School is known as “The Castle on the Hill”and is a great source of pride for the residents of the city as well as the alumnae. The resistance is strong.

The campaign to save Camden High has morphed with a larger movement to return local democratic control over the district as a whole. Since the most recent takeover of Camden by the state in 2013, transportation and child care programs for student-parents, funding for textbooks and technology have all been cut. Everything has suffered, including the quality of the cafeteria food. Teacher burnout is on the rise.

Tomlinson, and the BATs, have joined to support New Jersey Communities United and Black Lives Matter organizers who are working on an education platform, to organize and push back in Camden and in Atlantic City. New Jersey BATs are also a coalition partner with NJ 15 Now.

Across the country, BATs try to be a leading example of what a citizen can be. We are here to show that teachers are some of the most important citizens of all—not to be demeaned by politicians’or CEO’s rhetoric. A Badass Teacher will not be spoken down to. Ever. Showing that example to our students is part of the BAT lesson plan. Teachers are not doormats or something someone can step on, and neither are our students. BATs are educated professionals dedicated to the children we teach, and we will defend them with our lives if need be.

As teachers, we know what it feels like to be labeled “failing.”We know that “failing”schools and districts align with the poorest zip codes and neighborhoods. Public schools serving Black and Latinx communities are the ones slated for charter school takeovers and closures. They have been failed and set up for failure by high stakes testing, and unequal funding. But BATs refuse to accept this.

And as a profession made up 80% by women, we don’t think it’s a coincidence that misogynistic politicians like Scott Walker and Chris Christie target our public sector unions first. Why go after the police or firemen, when teachers are perceived to be such an easy target?

BATs helped lead the charge in exposing how dangerously and grossly unqualified Betsy DeVos was for the job of Secretary of Education. At her committee hearing, DeVos showed she did not have a basic understanding of how the federal education system works. She did not know the difference between proficiency and growth. She did not know that IDEA was a federal law that states have to follow. She feels that students with disabilities should sign away their IDEA rights to obtain a voucher to attend a private school. Sadly, we saw politicians on both side of the aisle supporting this incompetent candidate because she is a wealthy donor to both parties. BATs do not have any allies on either side of the political aisle. With her nomination, teachers, parents and students are bracing for the worse—and organizing.

All we have is each other and our communities. BATs are here to fight for our students, our families, our communities, and our teachers against all challenges. And we are not going anywhere. Join us.

This article was produced in partnership with Read the Dirt.

Kilfoyle has been a teacher in the Social Studies Department at Oceanside High School (NY) for 29 years and she is the mother of a 14-year-old son. She is also on the steering committee for the New York State Allies for Public Education and is National Board Certified.

Tomlinson is a teacher of students with special needs at the middle school level. Along with teaching and advocacy, Melissa runs the after school program in her school building, providing a place for students to receive extra educational assistance, exposure to career possibilities, and a safe place to be after school hours. Melissa is the mother of two sons.