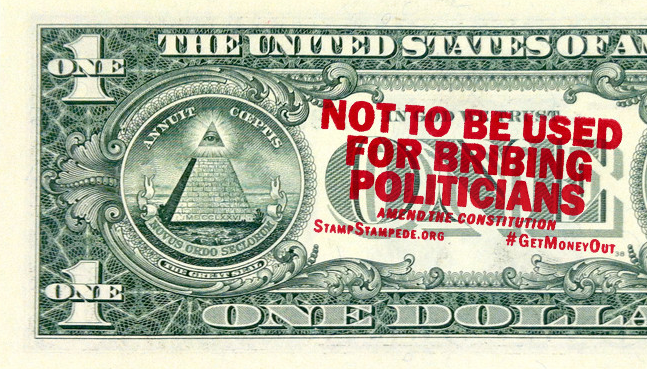 Get To The Root: Amend The Constitution

Constitutional Amendment: 1) money is not speech; and, 2) corporations are not people.

In civics class, we still teach our children that American-style representative democracy is a model for the world to imitate. But in practice, our government has become a broken system of corrupt lawmakers and crony capitalism. It’s time to either change the lesson plan or fix the government.

Wealthy special interests use lobbying and campaign contributions to buy access and influence in the halls of Congress and they use that access to advance their own self-interest.

For example, in 2003 when Congress passed Medicare Part D to provide prescription drugs to seniors, pharmaceutical companies spent over $100 million to ensure the final bill barred the government from negotiating prices with the drug companies. As a result, taxpayers foot the bill for bloated medical costs while drug companies rake in billion dollar profits. Meanwhile, the congressman who sponsored the bill, Rep. Billy Tauzin left Congress for a seven-figure salary with the largest pharmaceutical lobbying firm. The story is the same for defense spending, the financial industry, big agriculture and big energy. Companies invest billions of dollars in lobbying and campaign contributions in order to secure even bigger profits.

The root of our current crisis extends back to the 1970s. In 1971, future Supreme Court Justice Lewis Powell issued a memo in response to several environmental and consumer protection laws encouraging corporations to organize in order to protect their interests. He writes: “Business must learn the lesson . . . that political power is necessary; that such power must be assiduously cultivated; and that when necessary, it must be used aggressively and with determination.”

In the aftermath of Powell’s memo, the number of firms with registered lobbyists in Washington ballooned from 175 to nearly 2,500 a decade later, and trade organizations like the Chamber of Commerce doubled in membership.

After Powell was named to the Supreme Court, he wrote the Buckley v. Valeo decision that equated money with free speech and paved the way for the democracy demolishing 5-4 ruling in Citizens United v. Federal Election Commission, which concluded that if corporations are people and money is free speech, then corporations should be allowed to spend an unlimited amount of money in order to influence elections.

While the candidate with the most amount of money does not always win, that’s not the issue. Many corporate political action committees make significant contributions to both political parties. The unfettered role of money in politics doesn’t give one party an advantage over the other; it ensures that big donors dominate the national conversation and maintain unprecedented access to lawmakers. As a result, we get laws that heavily reflect corporate interests not public interests.

There is only one way to restore our government of, for and by the people. We need to amend the Constitution to say: 1) Corporations are not people; 2) Money is not free speech.

That’s why I’ve started a petition on steroids. Stamp Stampede is tens of thousands of people legally stamping messages like “NOT TO BE USED FOR BRIBING POLITICIANS” on dollar bills in order to build the movement and support for a constitutional amendment. Every stamped dollar will be seen by an estimated 875 people over two and half years. As more and more stamped dollars enter into circulation, we will create a mass visual demand of support that Congress cannot ignore.

So far, 17 states and over 600 municipalities have passed resolutions in support of an amendment, over 160 members of Congress support an amendment strategy and this summer, the Senate Majority Leader Harry Reid (D-Nevada) will hold a floor vote on one proposed amendment.

One of the greatest features of Americans is our ability to self-correct. We’ve amended the Constitution 27 times before – to end slavery, extend the vote to all citizens regardless of race or gender, popularly elect senators and lower the voting age to 18. It’s time to amend the Constitution again to restore one person, one vote and end the system that Sen. John McCain (R-Arizona) described as “legalized bribery” and that has degraded our democratic republic.