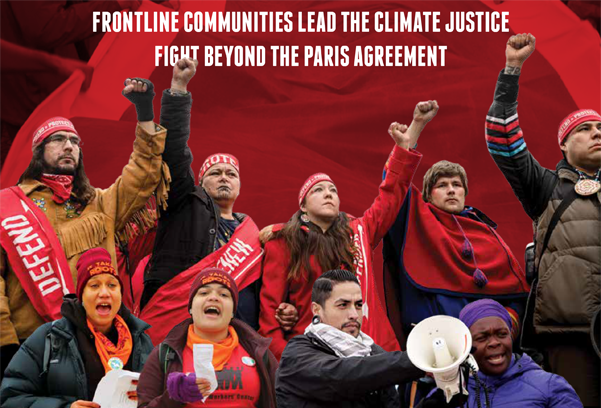 Grassroots Global Justice Alliance condemns Trump’s announcement to withdraw the US from the Paris Agreement.

While the accord was far from what the planet needs, Trump’s reckless decision underscores a key overarching issue with the Paris Agreement in the first place.  When the Paris Agreement was signed in 2015, we put out this report entitled “We Are Mother Earth’s Red Line: Frontline Communities Lead the Climate Justice Fight Beyond the Paris Agreement.”  We laid out 5 key concerns in the report.  Our number one concern (see page 6) with the agreement was “The Agreement relies on voluntary versus mandatory emission cuts that do not meet targets scientists say are necessary to avoid climate catastrophe.”  Trump’s withdrawal is a clear example that voluntary pledges are not enough.

“Donald Trump is showing us the art of breaking a deal,” says Tom BK Goldtooth, Executive Director of Indigenous Environmental Network. “By abandoning the Paris Agreement, this administration will further perpetuate environmental racism and climate injustice against Indigenous peoples experiencing the worst effects of climate change across the globe. We’ve stated before that the Paris Agreement falls short of embracing the sort of climate solutions that lift up human rights and the rights of Indigenous peoples. Regardless of its shortcomings, it is critical that the United States be held accountable for its contributions to the climate chaos we are seeing across the globe and to take ambitious action to meet the Agreement’s goal to limit temperature increases to 1.5 degrees Celsius. Backing out of this agreement continues a long history of broken promises and threatens the vital and sacred life cycles of Mother Earth.”

Our number two concern (page 6) was “The Agreement advances pollution trading mechanisms that allow polluters to purchase “offsets” and continue extremely dangerous levels of emissions.”  If we truly aim to reach the stated goal of reducing carbon emissions to 1.5 degrees Celsius, we will never get there with a carbon market system.

Monique Verdin, Secretary of the United Houma Nation Tribal Council, Louisiana says “the Paris Accord is not a perfect solution, but to step out of it is to step back. Our coastal communities in the Mississippi River Delta are surrounded by a web of pipelines, oil and gas canals, while our sinking lands are pock marked by oil waste pits. We are being told that our traditional territories may have to be sacrificed to the sea and that our post-colonial sanctuary settlements may have to be abandoned in this unprecedented wake of sea-level rise. If we don’t change our relationships with extreme extraction the heartache of losing some of the most precious biodiversity in the world, will be disregarded for the delusions of “progress.”

While the agreement was far from what we need at the global scale, at minimum it was still a significant indication that world leaders were taking climate change seriously.  Across the globe, the Paris Agreement was being used as a baseline argument to continue promoting the real Just Transition that we need away from a fossil fuel economy.

Despite Trump’s claims that the Paris Agreement threatened jobs, a clean energy economy will provide new jobs and training for workers hardest hit in the transition from fossil fuels.  Dollar-for-dollar, clean energy technology creates three times as many jobs as fossil fuels, and the wind and solar sectors are among the fastest growing in the economy.  The coal industry cannot be revived as Trump promises.  The market for coal is no longer there.  There will be limited jobs in coal.  Investing in energy efficiency, clean energy technology, and sustainable infrastructure will revitalize the manufacturing and construction industry.

Trump made this decision not based on what is good for the survival of humankind, nature and Mother Earth, but instead what he and his chief strategist Stephen Bannon believe will be best for his chances at maintaining support from his narrow conservative base.

However, his statement that he was “elected to represent the citizens of Pittsburgh, not Paris” shows that he underestimates the intelligence of his own base, in addition to calling into question whether Trump even understands the agreement at all.  Bill Peduto, Mayor of Pittsburgh, expressed his outrage at Pittsburgh being used as an example to justify Trump’s decision, and pledged in a Tweet that Pittsburgh will “follow the guidelines of the Paris Agreement for our people, our economy and our future.”  Many other mayors across the country came out yesterday pledging to continue striving to reduce carbon emissions in their own regions.

“The decision that Trump made to pull out of the Paris Agreement is about his accountability to fossil fuel industry and the Military Industrial Complex, not to the citizens of Pittsburgh or to any people living at the frontlines of the climate crisis,” says Cindy Wiesner, National Coordinator of Grassroots Global Justice Alliance (GGJ).  “This decision also disregards the historical and differentiated responsibility of the US and other countries of the global north to take on their fair share of the efforts to reduce global carbon emissions.”

We would not go as far as the author of this article to praise Trump for this decision, but we do agree that Trump pulling out of the agreement “will disrupt our complacency and strengthen the most vigorous avenues of climate action left to us,” which we believe come from frontline communities themselves and the solutions they are building on the ground.

“Communities on the frontlines of the climate crisis have been fighting climate change for decades,” says Elizabeth Yeampierre, Executive Director of UPROSE. “These frontline communities are communities of color and low-income communities, this is true locally, nationally and globally. We have long known that we cannot rely on governing administrations that are in bed with the fossil fuel industry to create or support any domestic or international legislation that would require a shift away from dirty energy. However, this does not diminish our outrage at this administration’s decision to withdraw from the Paris Agreement. While the agreement falls short of known and necessary emissions reductions benchmarks, it opens the door to the critical measures, which are necessary to drive a Just Transition away from the extractive economy. An exit from this agreement will only propel the climate justice movement to rise up against the destructive order that this administration has established, which threatens the dignity of our communities and the stability of our planet.”

“The shortcomings of the Paris Accord and Trump’s erroneous and embarrassing decision to withdraw the U.S. from the agreement — proves more than ever that communities on the frontlines of the climate crisis are the ones to lead us toward a renewable and regenerative future,” says Angela Adrar, Executive Director of the Climate Justice Alliance (CJA). “We will continue to organize for climate justice and stand in solidarity with our international allies who are fighting for survival, resisting extraction, and creating solutions from the ground up.”

Now is the time to continue mobilizing for climate action at the local and regional levels, following the efforts led by communities at the frontlines of the climate and economic crises.

Click here for responses from social movements across the world with the Global Campaign to Demand Climate Justice.