NOTE: Police abuse of protesters has been common throughout the Yellow Vest protests. Police have been the instigators of violence. The heavy-handed arrest of Eric Drouet on the flimsy claim he was organizing a protest without a permit, shows desperation on the part of French authorities to stifle the protest movement. As is often the case in mass protest movements, when the police are too aggressive it fuels the movement. The Journal reported Droute’s comments after he was released:

Speaking to reporters after his release, Drouet said he had been on his way to a restaurant with four others when they were picked up.

“I wasn’t wearing a yellow vest, just walking on the pavement,” he said, calling the arrest “incomprehensible”.

“I’m not the yellow vests’ representative. With or without me, it will continue”, he said, speaking of the protests.

“It wasn’t a call for a demonstration,” he added, denying accusations that he had called for a rally on the Champs-Elysees yesterday evening while failing to inform authorities in advance of the protest.

“Everything that has happened here, it’s political, ” he said, a view echoed by his lawyer Lara Kheops, who called his arrest “totally arbitrary”.

While many in the corporate media are reporting the protests are waning, people involved in the movement say the protests will continue and polls show a majority of the public wants the protests to continue. The movement has been very critical of media reporting and has protested their offices.

Macron has made a number of concessions to the Yellow Vests but people are not satisfied as they see system-wide problems that need to be corrected. RT reports “people continue to demonstrate against a decline in living standards and growing inequality. As a result, the movement has morphed to voice wider discontent against Macron’s pro-business agenda, which protesters claim favor the country’s rich.” KZ 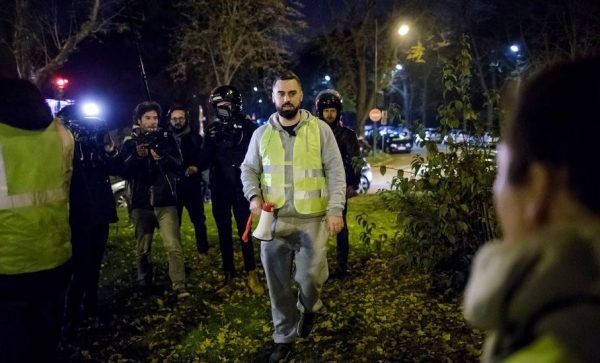 Eric Drouet has stood out in the protests. He shocked many French by declaring his readiness to “go inside” the presidential palace if he reached it in a demonstration.CreditCreditChristophe Petit Tesson/EPA, via Shutterstock

Activist, Eric Drouet, was accused of organizing protests without getting the relevant authorities’ permission. Shaky grounds for an arrest.

Yellow Jackets activist Eric Drouet, who emerged as one of the leaders of the French anti-government movement, was arrested in Paris on Wednesday evening.

Drouet, by profession a truck driver, was accused of the “organisation of an event without prior notification” for an event that took place in the French capital that night, French prosecutors said…

Drouet was apprehended near the Champs-Elysées, where a few dozen activists gathered at his request.

On 22 December, Éric Drouet was also arrested during the “Act VI” demonstrations of the Yellow Vests in Paris and was then placed in custody for “carrying a prohibited weapon”, in this case a baton, and “being part of a group seeking to commit violence or cause damage”. More shaky ground.

The Yellow Jackets, named after the fluorescent clothing worn by protesters which is a requirement for all French who own a vehicle, emerged as a popular movement last year because of anger over a planned hike in fuel tax, among many other things. The movement quickly grew big enough to challenge French President Emmanuel Macron’s government…

Mélenchon later called for the release of Drouet in yet another tweet:

It seems like now, the French authorities are using any excuse they can to shut further Yellow Vest or, “Gilets Jaunes” as they are known in France, protests down.

The protests have achieved much, as Macron himself acknowledged, but more is required, as many have said, if Europe is to be saved.