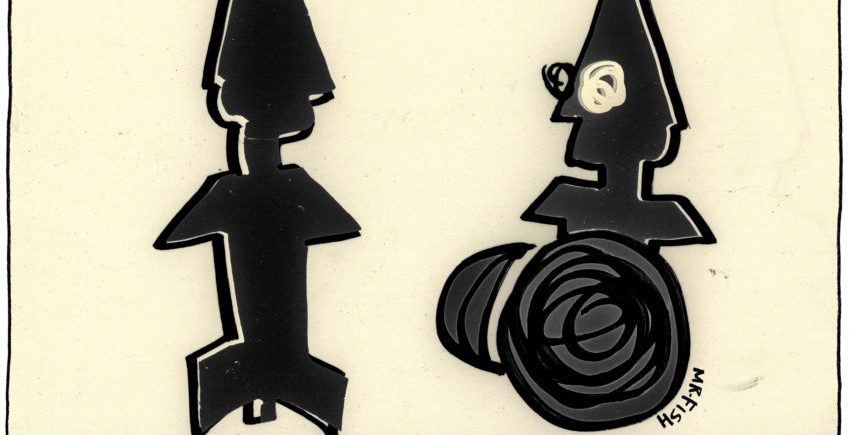 The most dangerous foreign policy decision of the Trump administration—and I know this is saying a lot—is its decision to share sensitive nuclear technology with Saudi Arabia and authorize U.S. companies to build nuclear reactors in that country. I spent seven years in the Middle East. I covered the despotic, repressive kingdom as the Middle East bureau chief for The New York Times. And I, along with most Arabists in the United States, have little doubt that giving a nuclear capability to Saudi Arabia under the leadership of the ruthless and amoral Crown Prince Mohammed bin Salman would see it embark on a nuclear weapons program and eventually share weaponized technology with Saudi allies and proxies that include an array of radical jihadists and mortal enemies of America. A nuclearized Saudi Arabia is a grave existential threat to the Middle East and ultimately the United States.

The drive to build nuclear reactors in Saudi Arabia is led by the half-wit son-in-law of the president, Jared Kushner, who met Tuesday with Salman in Riyadh, the Saudi capital, to discuss “ways to improve the condition of the entire region through economic investment,” according to the White House. Prominently involved in that economic program are corporations such as IP3 International, a consortium of U.S. companies led by several retired generals and admirals and others who stand to make millions from the deal.

The Saudi government, which is soliciting bids for the nuclear reactors, reportedly spent more than $450,000 over a one-month period to lobby the Trump administration to approve its purchase of the equipment and services from U.S. sources. Westinghouse Electric Co. and other American companies are preparing to construct the facilities, which would allow Saudi Arabia to enrich and reprocess uranium. The secretive effort to give Saudi Arabia a nuclear capability is not only colossally stupid, but has been done without being reviewed by Congress, as required by law, and violates the Atomic Energy Act.

Salman, whose psychopathic traits remind me of Saddam Hussein, is widely believed to have ordered the assassination of journalist Jamal Khashoggi in the Saudi consulate in Istanbul in October 2018. He has imprisoned dissidents, brutally ousted rivals, seized over $100 billion in extortion money from kidnapped and tortured members of the royal family and instilled a level of fear and terror inside the kingdom, always a repressive society, unrivaled in its modern history.

Donald Trump and Kushner, by shamelessly defending Salman, even in the face of CIA declarations that the agency has “high confidence” the prince ordered the killing and dismemberment of the Washington Post journalist, are accessories to murder. Not surprisingly, the White House ignored a deadline this month that the Senate Committee on Foreign Relations set for making a report on Khashoggi’s assassination. Kushner, whom the Saudi leader reportedly claimed to have “in his pocket,” did not appear to have raised the Khashoggi murder in last week’s meeting, the first face-to-face encounter he has had with Salman since the assassination.

Salman has not ruled out weaponizing any nuclear facilities. He stated in 2018: “Without a doubt, if Iran developed a nuclear bomb, we will follow suit as soon as possible.” He has also refused to accept any restrictions on enriching uranium and processing plutonium.

Nuclear weapons can be made from uranium or plutonium. The uranium-235 isotope is used in nuclear reactors and nuclear bombs. However, it is less than 1 percent of the naturally occurring element and must be increased—the process is called enrichment—to about 5 percent to work in nuclear reactors. To make nuclear bombs it must be enriched to about 90 percent. Enrichment is carried out by using high-speed centrifuges. This means that the machines that produce nuclear reactor fuel for civilian use can also be used to produce nuclear bombs. It is for this reason that nuclear material in civilian enrichment facilities in nations that do not have nuclear weapons, or have promised not to produce nuclear weapons, such as Iran, is closely monitored by the International Atomic Energy Agency (IAEA).

An enrichment plant used to fuel one nuclear reactor has the potential to produce 20 nuclear bombs a year by using some 300 centrifuges to enrich uranium-235 to the 90 percent level. A nuclear bomb requires about 55 pounds of highly enriched uranium. The more high-speed centrifuges a country has, the faster weapons-grade uranium can be produced.

Rep. Elijah E. Cummings, the chairman of the House Committee on Oversight and Reform, has issued an interim staff report giving testimonies of multiple whistleblowers who warn about the impending transfer of nuclear technology. It lays out in chronological detail the secretive and blatantly illegal efforts by the Trump White House to facilitate Saudi Arabia’s purchase and construction of the nuclear reactors.

The efforts by Saudis and Americans began before Trump took office. Saudi officials, including Khalid Al-Falih, the minister of energy, met with Kushner in New York before the inauguration. The Saudi delegation held out the promise of spending $50 billion on American defense contracts over four years.

IP3 executives Gen. Keith Alexander, Gen. Jack Keane, Bud McFarlane and Rear Adm. Michael Hewitt, as well as the chief executives of six other companies—Exelon, Toshiba America Energy Systems, Bechtel, Centrus Energy, GE Energy Infrastructure and Siemens USA—sent a letter to Salman three weeks before the Trump inauguration that presented a plan to build nuclear reactors in Saudi Arabia. They called it “the Iron Bridge Program,” the report states, and characterized it as “a 21st Century Marshall Plan for the Middle East.”

Michael Flynn, then the incoming national security adviser and one of the former business partners in the venture, sent a text to Alex Copson of ACU Strategic Partners on Inauguration Day assuring him that the nuclear project was “good to go” and suggested that Copson contact his colleagues to “let them know to put things in place,” the report reads.

On Jan. 27, 2017, a week after the inauguration, Derek Harvey, who from January to July 2017 was the senior director for Middle East and North African affairs at the National Security Council, met at the White House with a group of IP3 leaders whom he had invited.

“Immediately after the meeting, Mr. Harvey directed the NSC staff to add information about IP3’s ‘plan for 40 nuclear power plants’ to the briefing package for President Trump’s [planned phone] call with King Salman [the prince’s father and the prime minister of Saudi Arabia],” the report reads. “Mr. Harvey also stated that General Flynn wanted President Trump to raise the ‘plan for 40 nuclear power plants’ with King Salman and that this was the ‘energy plan’ that had been developed and approved by General Flynn during the presidential transition.”

When the NSC staff informed Harvey that the transference of nuclear technology to a foreign country had to comply with the Atomic Energy Act, he dismissed the complaint, saying, in the words of the report, that “the decision to transfer nuclear technology to Saudi Arabia had already been made during the presidential transition and that General Flynn wanted President Trump to raise ‘the nuclear power plants’ with King Salman.”

On Jan. 28, 2017, the report reads, “General Flynn and Deputy National Security Advisor K.T. McFarland received two documents in their official White House email accounts in a message entitled, ‘Launching the Marshall Plan for the Middle East’ from Mr. McFarlane, a co-founder and Director of IP3 and a former national security advisor to President Reagan who pleaded guilty to participating in the Iran-Contra cover-up in 1988.”

The documents included a draft cover memorandum from Flynn to Trump and a draft memorandum “for the President to sign” directing agency heads to lend support to Thomas Barrack—who managed Trump’s inaugural committee and raised funds for Trump and whose investment firm, Colony NorthStar, would profit from the nuclear deal—for the implementation of the IP3 plan.

“The second document was formatted as a Cabinet Memorandum from the President to the Secretaries of State, Defense, Treasury, and Energy; the Director of the Central Intelligence Agency; and the Chairman of the Joint Chiefs of Staff,” the report reads. “It stated that President Trump had assigned Mr. Barrack as a special representative to oversee implementation of the Middle East Marshall Plan: ‘I have assigned a special representative, Tom Barrack, to lead this important initiative and I am requesting him to engage each of you over the next 30 days to gain your input and support for our Middle East Marshal [sic] Plan.’ ”

On March 14, 2017, Trump, along with Kushner, met with Prince Mohammed bin Salman in the Oval Office. They discussed “a new United States-Saudi program . . . in energy, industry, infrastructure, and technology worth potentially more than $200 billion in direct and indirect investments within the next four years.”

Barrack’s white paper read: “The President will appoint a special representative for the Trump Middle East Marshall Plan with the diplomatic rank of ambassador or special advisor [to] the President.” It also stated, the report reads, that the special envoy should “coordinate and work hand-in-hand” with government officials, including Kushner.

“The white paper stated that the President should implement the Middle East Marshall Plan through an executive order,” the report reads. “It described the Special Envoy as building ‘long-line relationships with U.S. private sector leaders acting as their expediter in clearing the traditional regional and regulatory hurdles to their participation’ and ‘trusted relationships with top leaders of GCC [Gulf Cooperation Council] countries, Israel, Egypt, Jordan, and Iraq.’ ”

The House committee staff report says most of the whistleblowers who spoke to the committee were able to document developments only during the early months of the administration. There have been few recent leaks from inside the White House on the nuclear deal. Secretary of Energy Rick Perry, Kushner and IP3 executives are currently overseeing the project.

“In January 2018, Brookfield Business Partners, a subsidiary of Brookfield Asset Management, announced its plans to acquire Westinghouse Electric for $4.6 billion,” the report notes. “Westinghouse Electric is the bankrupt nuclear services company that is part of IP3’s proposed consortium to build nuclear reactors in Saudi Arabia, and which stands to benefit from the Middle East Marshall Plan. In August 2018, Brookfield Asset Management purchased a partnership stake in 666 Fifth Avenue, a building owned by Jared Kushner’s family company.”

“In March 2018, Crown Prince Mohammed bin Salman undertook a ‘last-minute visit to New York,’ where he housed his entourage at the Trump International Hotel in Manhattan for five days, a stay that reportedly ‘was enough to boost the hotel’s revenue’ by 13 percent ‘for the entire quarter,’ ” the report reads.

On Feb. 12, 2019, Trump met in the White House with several private nuclear power developers. The meeting, the report states, was “initiated by IP3 International.”

“The meeting was reported to include discussions about U.S. efforts ‘to secure agreements to share U.S. nuclear technology with Middle East nations, including Jordan and Saudi Arabia,’ ” the report reads.

There is little time left to halt the transfer of nuclear technology to Saudi Arabia. Iran, a mortal enemy of Saudi Arabia, will have no choice but to begin a nuclear weapons program if the Saudis build nuclear reactors. The thought of nuclear weapons being in the hands of Salman, an updated version of Saddam Hussein, and ultimately in the hands of nonstate radical jihadists who are supported and funded by powerful elements within Saudi Arabia, is terrifying.