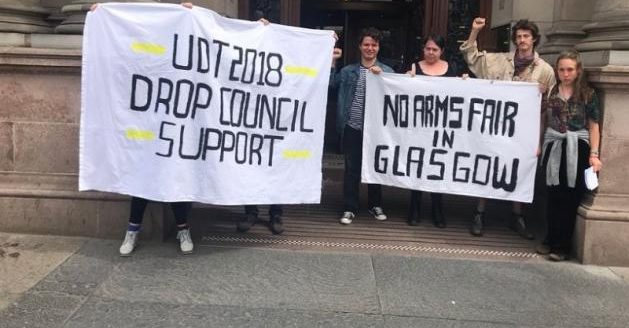 CAMPAIGNERS have welcome the decision of Glasgow City Council to drop defence as one of the sectors it seeks to attract to Glasgow for conferences, as part of a shake-up of events policy following a controversial arms conference held in the city almost one year ago.

The UDT conference, organised by Clarion Events, in June 2018 was initially agreed to by the previous Labour administration, but the SNP-led Council rejected calls from peace activists to cancel the arms fair, despite participants in the event being linked to the construction of the new generation of Trident nuclear missiles and Israel’s illegal blockade of Gaza.

The Council removed the People Make Glasgow logo from the event before it took place and said it would be designing a new “ethical” policy on the hosting of future conferences, the details of which were contained in an email seen by CommonSpace from Council deputy leader David McDonald on 7 May to the Sink the Glasgow Arms Fair coalition, which had been enquiring about the progress of the new policy.

McDonald states in the email: “I’m pleased to report back to you the following progress.

“1) We have removed the area of ‘defence’ from our key sectors. We will now focus on attracting conferences in the areas of; Life Sciences, Tourism, Low Carbon Industries, Financial and Business Services, Engineering’s, Design and Manufacture, Higher and Further Education and the Creative Industries.

“2) We have introduced greater flexibility in the sign off/review process for conference. This will now be done on a case by case basis that allows the city to make the most appropriate decision in line with the city’s values and approval policies.

“3) Where a conference is considered to have any reputational risk to the city, there will be a multi stage approval process involving Glasgow Life and the City Council. During this process the following points will be considered;  What is the focus of the event and might the subject matter or title be controversial or present the risk of reputational damage to the City or City Council? And; Do the activities and aims of the conference conflict with the policies of Glasgow City Council?”

Commenting, Sutherland, who was one of the organisers of the Sink the Glasgow Arms Fair protests last June, told CommonSpace that he welcomed the Council’s new ethical events policy.

Sutherland said: “We welcome finally getting to see Glasgow City Council’s statement on the ethical events policy they promised the public following pressure from Scotland Against Militarism, Campaign Against The Arms Fair and others which included occupying the leader of Glasgow City Councils surgery to just get her to speak to us for the first time and exposing a banquet held in Kelvingrove Art Gallery and Museum for the Arms Dealers which showed us that not only two public buildings (including the SECC) were being used but also that the public funds given to the Arms Fair were much more than we thought which still have not been released.

“These are sensible polices that should have been in place from the start which would have stopped the Arms Fair and saved the council from a PR nightmare. We also welcome the council taking defence off of its key target sectors as we all know the defence industry is completely separate from other emerging areas for the city – it often brings the worst of the worst in terms of human rights such as companies involved in the occupation of Gaza coming into our city.

“The council still have much work to do on this – armed forces still disproportionally target deprived areas and schools in particular especially in Glasgow. This will be the focus for our campaign ahead.”

Andrew Smith of Campaign Against Arms Trade, which was also involved in the protests against the arms fair, said that the new events policy was “a big victory for everyone that took action last year”.

Smith said: “The UDT arms fair should never have been allowed to take place in Glasgow Council facilities, but we are glad that the Council has listened and is taking action. This is a big victory for everyone that took action last year.

The wording suggests that Council will take a stronger approach, and will not actively try to attract military events, but it is not the outright ban that many would like to see. That being said, this is is definitely a significant step forward, and it sets an important precedent. It should be reflected on and followed by local authorities across Scotland and beyond.

As the slogan makes clear, it is people that make Glasgow, and the people of Glasgow do not want their Council to host arms dealers.”

Isobel Lindsay, vice-chair of Scottish CND, described the Council’s decision as “a very positive response and we welcome it”.

She added that it “illustrates the importance for campaigners to be vigilant” in opposing the nuclear weapons industry.

CommonSpace contacted Glasgow City Council for comment but they had not responded by time of publication.