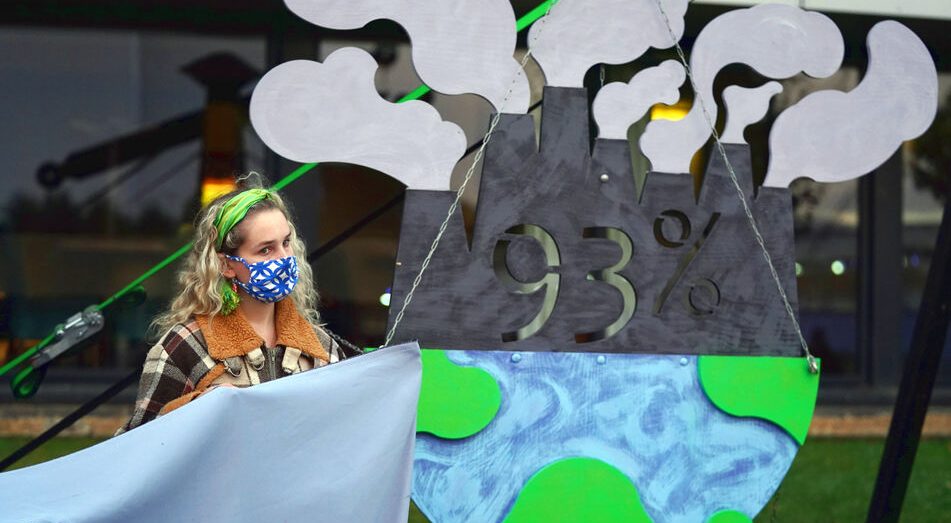 Above photo: A protester on November 4 in Glasgow points out that the richest countries pollute the most, but poor countries suffer the consequences.  IMAGO / ZUMA Press.

“Exceptionally weak” with no mention of fossil fuel phaseout.

Solidarity with the Global South will be vital to ensuring a worldwide just transition to renewable energy.

Glasgow, Scotland – The first draft of the Glasgow final decision text at COP26 completely fails to mention fossil fuels, despite expert consensus on the need to end new coal, oil and gas immediately to meet the goals of the Paris Agreement 1.5C goal.

Thanks to blocking by fossil fuel interests, the first version of the official text, published by the United Nations Framework Convention on Climate Change, fails to acknowledge that fossil fuels are driving the climate crisis, nor does it make any commitment to tangible actions to end global reliance on coal, oil and gas. The text is just 850 words long.

Campaigners are gravely concerned because ordinarily, the first draft of a COP text is relatively ambitious, and becomes weaker over the second week as countries work in caveats for themselves. For the first draft to be so weak does not bode well.

This glaring omission comes despite the fact that experts at the International Energy Agency have made clear there can be no new fossil fuel projects, beyond those already underway this year, if we’re to deliver the goal of keeping global temperature rise to 1.5C. And after the most recent IPCC report the UN Secretary General has said that the latest climate science must sound a “death knell for fossil fuels” and that countries should end all new fossil fuel exploration and production.

Campaigners are calling on negotiators to stand up to fossil fuel producing countries like Saudi Arabia and Australia, which have blocked fossil fuel reduction even being mentioned in the last 25 COP texts and are crippling ambition in the negotiations at Glasgow. The key markers of success for the week ahead are as follows:

Jennifer Morgan, Executive Director of Greenpeace International, has been to every COP and every time the mention of fossil fuels has been blocked by the same countries. She said: “What’s very concerning here in Glasgow is that the first draft of the climate pact text is already exceptionally weak. Usually the text starts with some ambition, which then gets watered down. “To keep 1.5 alive, four words must be added: ‘fossil fuels phase out’, and countries must come back next year to close the gap.”

Edwin Namakanga, aged 27, from Uganda is a climate activist from Fridays for Future, Most Affected People and Areas, who arrived at COP on board the Greenpeace Rainbow Warrior ship last week, with a message for world leaders: stop failing us.

Edwin said: “In my lifetime I’ve seen first hand the destructive impact of the climate crisis, which everyone knows is driven by fossil fuels.

“The result from Glasgow must be the end of new fossil fuels, and there must be proper financial support for countries in the Global South. We need solidarity and just transition to renewable energy, because anything less is a death sentence for whole peoples, countries and areas.”

Kate Blagojevic, Greenpeace UK’s head of climate, said: “The UK Presidency has let the most vulnerable nations down by supporting such a weak first draft text. Alok Sharma can still fix this and insist world leaders up their game through stronger commitments on phasing out fossil fuels and significantly increasing pledges on adaptation finance in the next draft. And that action can start in the UK today by ruling out all new fossil fuel projects, including the Cambo oil field, and making sure the UK’s climate finance contributions don’t eat into the aid budget.”

Negotiators at COP26 have just five more days to reach an agreement which will inform how countries tackle the climate crisis, and will seek to nail down a final text for countries to sign.

At the halfway point of the talks, countries have so far announced a string of voluntary agreements that contain vague language and big loopholes.

Last week the Taskforce for Scaling Voluntary Carbon Markets, put forward by UN Special Envoy on Climate Action and Finance, and former Bank of England governor, Mark Carney, was widely criticised as a greenwash operation, including by Greta Thunberg. On Wednesday Greenpeace activists staged a protest to disrupt the launch event, and ensure the Taskforce does not press ahead unchecked.

Over the weekend, Saudi Arabia came under fire for trying to block the creation of any ‘cover decision’ for the final text whatsoever, for deleting references and for trying to block efforts to achieve progress on adaptation. A key pillar of the Paris Agreement, adaptation is the effort to help millions of people around the world cope with the impacts of rising temperatures. Lack of progress on adaptation would make it difficult for vulnerable countries, including the African block of nations, to embrace any final agreement, making success at COP26 less likely.

And the Saudi government has already tried to influence the wording of a landmark UN climate science report, due out in March next year. The BBC and Unearthed revealed that representatives from the Saudi oil ministry pushed the authors of the IPCC Sixth Assessment Report on mitigation to remove a reference to published literature that found fossil fuels need to be phased out if we’re to avoid the worst effects of climate change. The Kingdom of Saudi Arabia is one of the world’s biggest oil exporters.

And today [MON] Global Witness revealed that there are more delegates at COP26 associated with the fossil fuel industry than from any single country. Fossil fuel activists outnumber the UNFCCC’s official indigenous constituency by almost two to one.

Given that the next two conferences will be held in Egypt and then the United Arab Emirates, campaigners fear that it’s crunch time for getting the COP text to commit to fossil fuel phaseout.

Arshak Makichyian, aged 27, is a Russian activist who is attending COP26. He said: “It is astonishing to me that in all these years that world leaders have had to deliver the big solution to climate change – over my whole life – not once have they mentioned the cause of the problem. My future is resting on just 850 words – but we need four more: phase out fossil fuels.

“What the hell have they been doing? We are out of time. Glasgow must mean a total and immediate fossil fuel phaseout. That’s it.”