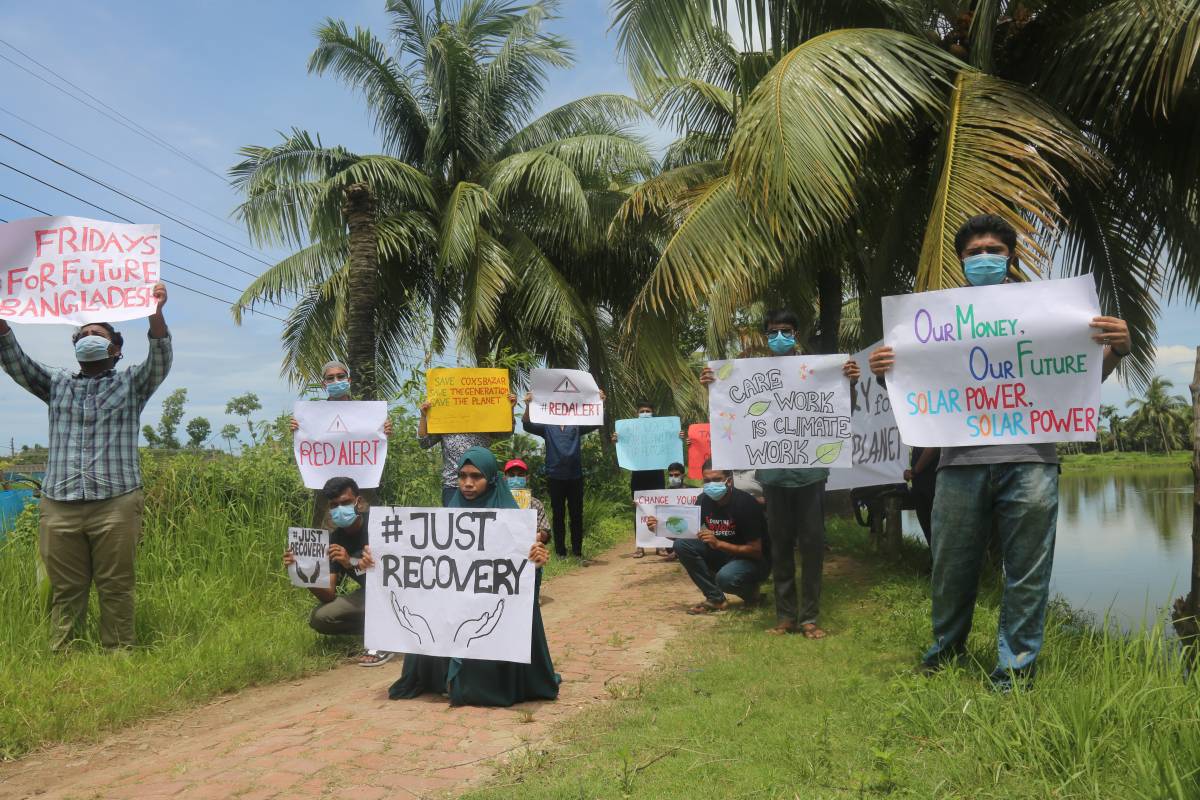 As the impacts of climate change and Covid-19 compound, politicians from around the world on Monday July 19th launched the new Global Alliance for a Green New Deal (GGND). Founded by Rep. Ilhan Omar of the United States, Dep. Joenia Wapichana of Brazil, and Manon Aubry of France among others, the Alliance aims to advance global momentum for collaborative and transformational social, economic and environmental policy.

A series of concerning global events precedes the announcement — the scale of historic floods in Germany and Belgium last week, which left more than 170 people killed and many more still unaccounted for left climate scientists shocked, and in recent weeks, heatwaves across North America have broken records. Last week it was reported that the Amazon is now emitting more carbon dioxide than it is able to absorb — an unsettling discovery which scientists attribute to a combination of deliberate fires set for forest clearing combined with rising temperatures and droughts. The seven hottest years on record have occurred in the years since 2014, and climate experts are concerned that we may have passed a precarious threshold which will result in increasingly unpredictable and unusual weather events that will become more commonplace.

While Brazil’s President Bolsanaro has been heavily criticized for encouraging forest clearing in the Amazon, founding member of the GGND Alliance, Congresswoman Joenia Wapichana of Brazil, emphasized “the Amazon is the largest tropical forest on Earth and a third is covered by Indigenous Lands. Protecting the rainforest is vital to fulfilling the Paris Agreement’s main objective — limiting global warming to 1.5 degrees”.

The Rationale For A Global Green New Deal

Despite the unprecedented nature of global climate solidarity that was marked by the signing of the Paris Agreement in 2015, the need for more decisive and coordinated action is clearly evident. This week the International Energy Agency (IEA) released forecasts revealing that 2023 is set to see the highest recorded levels of carbon dioxide emissions in human history. This follows an IEA report released in April that indicated global energy-related carbon dioxide emissions will rise by 1.5 billion tonnes in 2021 alone — a stark reversal to last year’s decline caused by the Covid-19 pandemic. This would signal the most significant annual rise in emissions since 2010, at the time of the economic recovery from the global financial crisis (GFC).

In the wake of the GFC in 2009 was when the United Nations Environment Programme first tabled the concept of a Global Green New Deal — describing the world as experiencing “the worst financial and economic crisis in generations”, and recommending a policy response that centered three main objectives: revive the world economy, promote sustainable and inclusive growth, and reduce carbon dependency and ecosystem degeneration.

Today, the world is experiencing an economic crisis of similarly dire proportions, compounded by a dramatically worsened ecological crisis and a historic global pandemic. As the Intergovernmental Panel on Climate Change (IPCC) warns that the planet is accelerating at a concerning pace towards a 1.5 degree temperature rise — the limit set out by the Paris Agreement to prevent dangerous climate change — the Alliance comes at a time of significant global uncertainty matched by significant transformative opportunity.

Built on a set of principles set out in the Declaration for a Global Green New Deal which include the need to build an economy that delivers wellbeing for all; protect and enhance the Earth that we share; create a caring low-carbon society; shape a fair multilateral system for the twenty-first century, and secure environmental and racial justice through shaping a truly democratic future, it highlights the opportunity to harness the present as a turning point towards a better future.

At the heart of the principles the Alliance is built on is the idea of a just transition — a term which in the context of climate refers to the need for transformations in political institutions, energy systems, and food and agriculture practices to center communities that are most vulnerable to climate change and the least responsible for its development. Food and water security are increasingly serious issues that disproportionately impact those in the Global South, exacerbated by an industrial food system that is over reliant on fossil fuels and which contributes significantly to climate change through land clearing.

Climate justice proposes that climate change be addressed through a transformation to a 100% decarbonized society that in the process repairs economic, political and social injustices. It is particularly relevant to Asia, as the continent which holds more than half of the global population in societies that are highly interconnected with natural resources and agriculture, with a high number of densely populated cities and coastal areas, and which has recently experienced rapid economic growth as a result of fossil fuel-led development.

That a dramatic reduction in the release of greenhouse gases into the atmosphere and a large-scale transition towards renewable energy is needed is no longer a uncontroversial stance, but determining the process and substance by which individual countries will contribute to achieving this has been the subject of countless international summits including the upcoming COP26 Summit to be held in Glasgow in November.

At COP 26, governments will be required to update their Nationally Determined Contributions (NDCs), the mechanism by which they will reduce their annual emissions and which must include detailed monitoring and reporting systems. While at present, advanced economies are responsible for mobilizing the majority of funds towards renewable energy, it is hoped that the highest emitting countries will take more decisive leadership and commit technological and monetary support to less developed economies that have less capacity to contribute and who are more climate-vulnerable.

The climate justice dynamic was conspicuous against the backdrop of the G7 Summit in June, where the seven member countries who are responsible for almost a quarter of global emissions convened to discuss collaborative and sustainable economic pathways forward. According to an International Institute for Sustainable Development report released in June, the United States, Japan and China provided 48% of the funding for gas projects in the Global South between 2017 and 2019.

Globally, social groups who are more vulnerable to the effects of climate change such as women and Indigenous people must also be accounted for in designing solutions that prioritizes their rights and their active engagement in transitional processes. While climate justice is often framed in terms of highest emitting and lowest emitting countries, it is important to note that disparities within countries are at times equally as pronounced as disparities between countries when it comes to vulnerability to a changing climate as well as responsibility for that country’s emissions. This underlines the timeliness of the Global Alliance, one that is translocal, unifies communities across national boundaries, and contributes to the formation of an intersectional decarbonization movement.

The Compounded Impact Of Covid-19 On The Climate Crisis

The pandemic has created an opportunity for transformative change on an unprecedented scale, highlighting the need for a just transition to a more sustainable, equitable economy and global society. While it has brought on an unprecedented time of uncertainty and turmoil for the world as a whole, it has underlined and exacerbated many inequalities that existed prior to its arrival.

The link between climate change and human health is now clearer than ever. People living in developing countries are more prone to hazard and health risks due to natural disasters, extreme weather events, and are typically exposed to higher levels of air pollution and unsafe drinking water. The World Health Organization estimates that between 2030 and 2050, climate change will cause an additional 250,000 deaths due to malnutrition, malaria, diarrhoea and heat stress alone. To compound this, access to healthcare and medical treatment are typically more sparse in climate-vulnerable areas.

As countries in Asia are reeling from the impact of the pandemic, and weak governance structures and inadequate infrastructure compound the crisis further, major Asian financial institutions continue to expand fossil fuel development while governments in the region are lagging on commitments to achieve net-zero emissions and are maintaining high-emissions development plans — particularly those powered by fossil gas — through stimulus packages under the guise of Covid-19 recovery.

The IEA’s flagship Sustainable Recovery Tracker released this week reveals governments around the world have spent an unprecedented USD 16 trillion to rebuild their economies in response to the pandemic and associated economic fallout, but of this, only 2% has been allocated towards clean energy. IEA Executive Director Dr. Fatih Birol, said “not only is clean energy investment still far from what’s needed to put the world on a path to reaching net-zero emissions by mid-century, it’s not even enough to prevent global emissions from surging to a new record”.

Nonprofit organizations have been campaigning for a ‘just recovery’ from the pandemic since May last year, when over 500 organizations demanded the crisis response prioritize a set of principles that would center human health, ensure economic relief reach people directly, ensure stimulus build resilience for future crises including climate change, and build solidarity in civil society through protecting democracy.

Echoing these principles, the GGND Alliance brings together politicians from 21 countries across the world who believe the only way to meaningfully address the climate crisis is through a coordinated, cooperative approach that advocates for fair and just policy packages as countries plan their post-pandemic economic trajectories. While members of the Alliance will work within their domestic arenas to advance policies that contribute to tackling the ‘dual crisis’ of Covid and climate, the coalition aims to garner global support which will be required in order to achieve necessary systemic transformation and “build a new internationalism based on cooperation and collaboration”.

The United Nations Environment Programme (UNEP) has previously pointed out that COVID recovery packages offer an opportunity for climate-friendly policy transformations — and while global leaders anticipate the upcoming COP26 climate summit to be held in Glasgow in November to signal global collaboration on vaccines and debt restructuring for developing economies, the Global Green New Deal Alliance is calling on bold action to be taken now. “This is our ‘moonshot moment’” — founding member Caroline Lucas MP of the UK states — “it’s about making a better life here on Earth and the only way to do that is by working together as never before”.