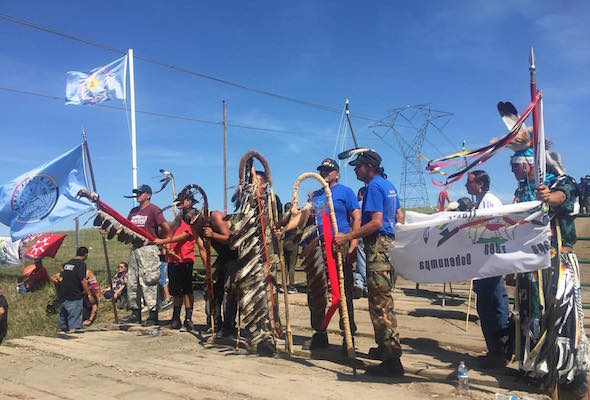 Global Call To Action In Solidarity With Dakota Pipeline Resistance

Cannon Ball, N.D.– The Red Warrior Camp, in partnership with the Camp of the Sacred Stones issued an official Call to Action Wednesday for allies from around the world to stand ?in solidarity with the groups by joining the NoDAPL Global Weeks of Solidarity Actions from September 3 – 17.

The groups call on supporters to organize protest actions at Citigroup, TD Bank, and the Japan-based Mizuho Bank locations to highlight the companies’ financing of the $3.7 billion Dakota Access Pipeline. If built, the new pipeline is expected to deliver 570,000 gallons of crude oil across 1,172 miles across North Dakota, South Dakota, Iowa and Illinois, where it will link to infrastructure able to transport the oil to the Gulf of Mexico.

According to the Call to Action:

“Water is a necessity for all life. Water is life. Now is the time for all people from all walks of life to join together to stop the desecration and destruction of water, land and life! Please join our Indigenous led movement to stop the Dakota Access Pipeline by planning or joining an action near you!”

The need for clean water is also at the heart of a legal challenge against the Army Corps of Engineers, brought by the Standing Rock Sioux Tribe with representation from Earthjustice and filed on July 27, 2016. The lawsuit alleges that the Corps’ approval of the permit that allows the oil company to dig the pipeline under the Missouri River just upstream of the reservation and the Tribe’s drinking water supply violates the Clean Water Act and other federal laws. An injunction that would stop construction while legal challenges are heard is expected by September 9.

The groups also launched a new website that includes a map of protest actions planned, news and updates:NoDaplSolidarity.org.