Global Day Of Action Against Human Rights Violations Of Chevron

Above: Chevron Protest in Toronto, Canada as part of Global Day of Action Against Chevron

In “Global Day of Action” Communities Protest in Richmond Joining Ecuador, Nigeria, Argentina and Romania in a Call for Solidarity Against Chevron for Environmental and Human Rights Crimes

On May 21st, in an unprecedented global event, communities on five continents took action against Chevron Corporation over the company’s track record on the environment and human rights. The communities, all affected by Chevron operations, united in a call to citizens and governments around the world to reject the Chevron brand or Chevron subsidiaries, including Texaco, until demands for redress and remediation are met.

The actions are taking place just days before Chevron’s annual general meeting where its CEO John Watson is under increasing pressure from shareholders for his company’s environmental record. Watson recently announced he was moving the shareholder meeting from its San Ramon headquarters to a remote town in Texas. In recent years, community leaders from different countries have besieged the Chevron annual meeting with protest, including last year when several called for the firing of CEO Watson due to his poor leadership and repeated disregard for human rights and the environment.

RT reports: “Headquartered in San Ramon, California, Chevron Corporation is active in more than 180 countries and is one of the leading players in the oil, gas, and geothermal energy industries. They are top market leaders in exploration and production, refining, and chemicals manufacturing as well as power generation.”

As part of the international protests against Cheveron, Anne Mahrer,Counselor of the Greens of Switzerland,said:“…The Greens support the 30,000 peasants and farmers in the Ecuadorian Amazon battling multinational Chevron-Texaco and is indignant that the oil group refuses to pay the fine of $ 9.5 billion it had sentenced an Ecuadorian Court for pollution worsened and impair the health of the Amazonian population…”

“…Of course, we regret that the Government of Ecuador has abandoned the Yasuni initiative and continue oil and mining exploitation at the expense of the preservation of biodiversity and indigenous peoples of the Amazon. But we regret that the international community, which had committed to pay the amount necessary to keep oil in the basement, had not fulfilled its commitments…” (Translated by Bing)

“Today we are gathered here to express our solidarity with the victims of transnational oil company Chevron. On four continents, hundreds of organizations and social movements are mobilizing to oppose practices of this company. several decades, Chevron pollutes the environment and unscrupulous infringes the rights of the peoples concerned. Sentenced to $ 9.5 billion for the damage caused by Ecuadorian Amazon by courts of Ecuador, Chevron has refused to pay.Instead, the company is launching armies of lawyers and experts to invalidate the judgment and intimidate victims of multiple lawsuits.

“The lack of cooperation of the justice of the state seat Chevron, namely the United States, is an additional obstacle in the path of the victims. For over 20 years, victims of Chevron in the Ecuadorian Amazon are trying to obtain justice for the damage caused by the company to their living environment. Meanwhile, not only the environment is contaminated, but many people continue to die or live with disease, sometimes incurable, such as multiple types of cancer and infections or other problems of the respiratory, reproductive and circulatory.

“Chevron’s case is emblematic in many ways the behavior of transnational corporations elusive legally, and we show, in particular:

1) the devastating effects of the activities of transnational corporations on local populations and the environment when are not governed by binding rules at national and international level;

2) the tortuous path that victims should take to redress;

3) the current economic system favors the interests of transnational corporations at the expense of human rights, labor rights and the environment;

4) lack of political will of States to prosecute and / or execute a sentence of a court in another country where the interests of “their transnational corporations” are at stake today.

“Transnational corporations have become a threat to human rights and democracy. Indeed, the involvement (direct or indirect) of TNCs in violations of human rights is well established. Few hundred transnational corporations dictate most of the production policy and economic and social policies that now threaten not only the real economy, but also the democratic functioning, prevent the enjoyment of human rights of the overwhelming majority of humanity and, in addition, have a detrimental effect on the environment. Meanwhile, transnational companies use complex structures to evade their responsibilities in human rights violations or escape taxation. They also barricaded behind confidentiality to refuse any useful information on their activities, even when they are implicated in human rights violations.

Compilation of Bulgaria protest against Chevron

Report from Australia protest: The Maritime Union of Australia delivered a letter to the US Consul General asking for a meeting to voice its concerns about the practices of mining giant Chevron. The letter, written by MUA WA Secretary Chris Cain, outlines the union’s concerns about Chevron’s corporate responsibility, both in Australian and the United States. In a recent trip to the US, a delegation found: “What the delegation learnt was that Chevron is very aggressive towards any community, environment or labor group that is active around its operations,” said Mr Cain. They were shocked to learn about what occurred in Richmond, CA: “I was shocked to learn that when the Richmond Refinery had an explosion last year, 14,000 residents went to hospital and almost 17 workers were killed. As a consequence of this, Chevron is now on probation and subject to USD$1 million in fines.” 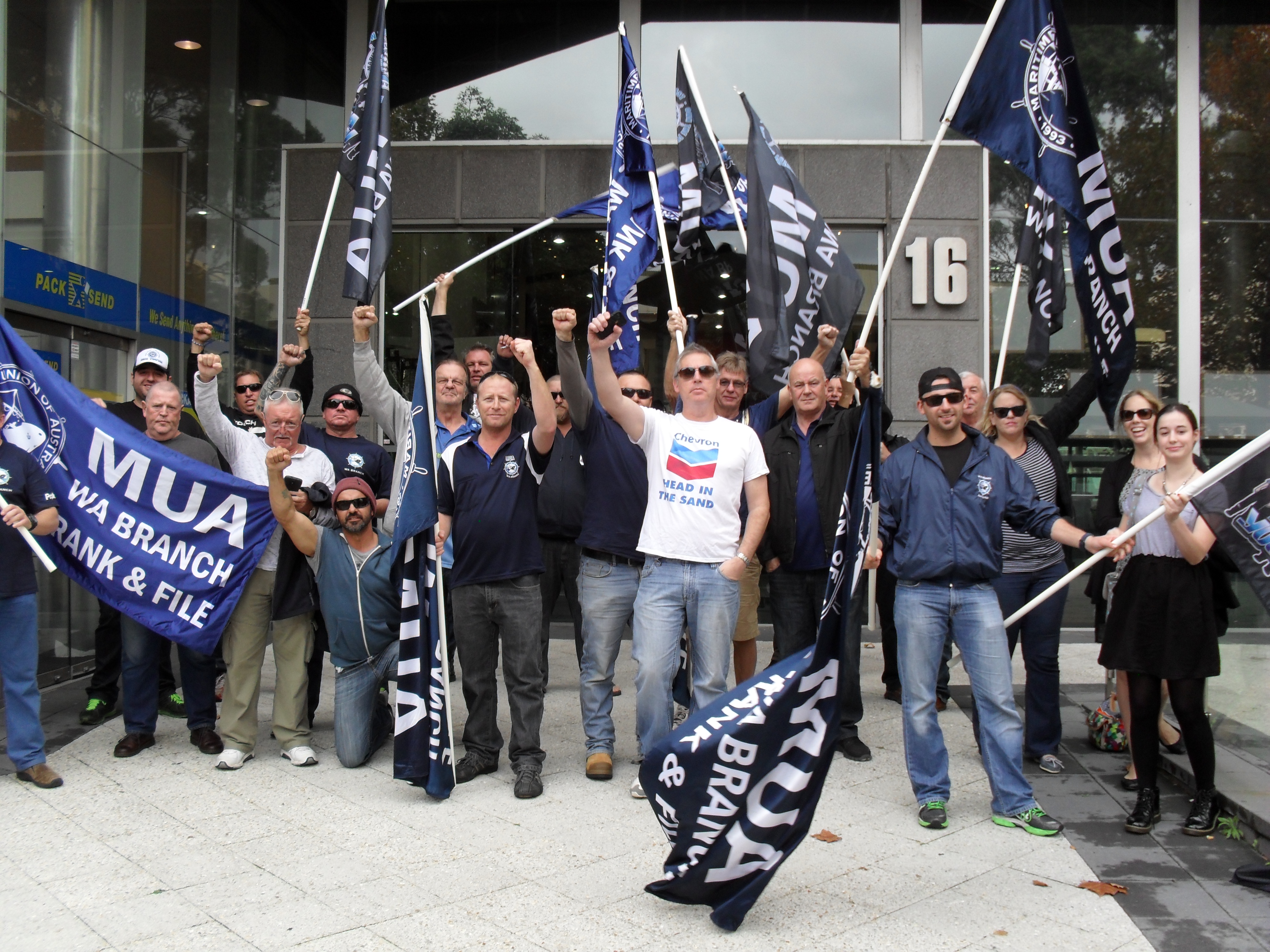 The MUA had serious concerns about a similar incident occurring in Australia, and had sought a meeting with the Consul General to raise concerns about Chevron’s way of doing business. “We are particularly concerned about Chevron’s actions towards our members working on the Gorgon Project, which is one of the world’s largest natural gas projects,” he said. “Since the start of the project, Chevron has targeted our members by attempting to undermine the wages and conditions for seafarers, stevedores and divers and attempting to avoid employing MUA members or potential members.”

Mr Cain said as the representative of the US government in Perth, the Consul General had a responsibility to encourage US-Australia trade, and needed to understand Chevron’s operations for the perspective of the thousands of workers employed on its projects.

Below is a video about Chevron’s mismanagement of the Gorgon project.

Chevron Protest in Huelva, Spain” We Say NO to Chevron

Activists hold signs reading “For Amazonia’s honor I am AntiChevron”, “For nature & life I am Antichevron” and ” I am AntiChevron” during a protest against US multinational energy corporation Chevron at a square in downtown Quito, Ecuador on May 21, 2014 (AFP Photo)

Video of Cheveron Protesters in Romania

Protester handing out a flower to police guarding Chevron building. Elderly lady argues with police at protest site: “We don’t want the gas rig there. We want our land as it used to be!” Bird’s eye view of protesters with police at exploratory well site

Protesters singing in protest whilst walking through field

Activists also list a number of human rights violations by Chevron throughout the world. Amazon Watch in their press release says:

“The declaration by the affected communities makes clear that Chevron has caused widespread and deliberate pollution across the globe; has repeatedly violated environmental safety regulations; and has allied itself with brutal military regimes that are complicit in human rights violations, including the deaths of environmental protesters in Nigeria and the use of forced labor in Myanmar. Rather than address the criticism, Chevron has spent hundreds of millions of dollars on “greenwashing” advertising and aggressive retaliatory legal attacks.”

Photos are from the Facebook page of the Global Day of Action.  Visit the page for more reports and updates.