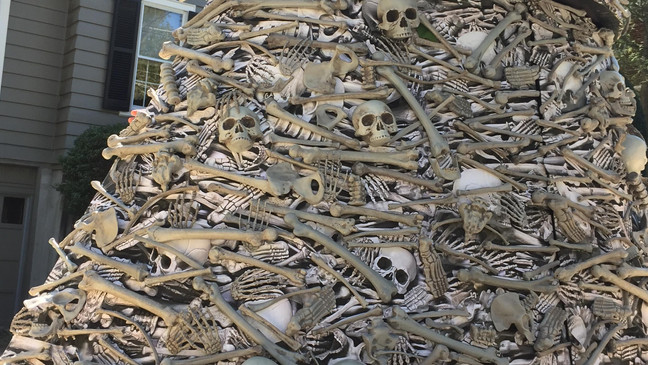 Washington — Activists gathered outside the homes of the White House chief of staff and the CEO of Moderna to demand the Biden administration and private drug companies do more to address the global vaccine shortage.

“Really, we’re bringing attention to the fact that both Moderna and the U.S. government have been completely inadequate in scaling up vaccine access globally,” James Krellenstein, co-founder of the AIDS advocacy group, PrEP4All told Sinclair Broadcast Group.

Protesters brought 12-foot-high piles of artificial bones to the sites to represent the lives lost unnecessarily while the Biden White House and the pharmaceutical giant put off steps to expand vaccine production capacity, leaving millions vulnerable to the coronavirus.

“The Biden administration has been twiddling its thumbs in the middle of one of the largest global humanitarian crises in human history,” Krellenstein charged. “We’re really leaving the world out on a limb … and we’re left vulnerable to a new variant that can absolutely devastate us.”

Activists say the Biden administration has failed to accelerate vaccine production to address the global shortage. Despite shoring up domestic supplies and pledging more than any other country to the global vaccination program, they say the White House has done little for the rest of the world.

“If we had starting to scale vaccines for the world and not just for ourselves in the beginning of the year, weg year we would have been well on our way to controlling the virus,” said Greg Gonsalves of the Yale School of Public Health.

The United States has already donated 160 million doses of COVID-19 vaccines to 100 countries. Last week, President Joe Biden announced the U.S. would double its contributions to COVAX, to share 1 billion doses of the Pfizer vaccine with countries in need.

The White House responded to criticism of its efforts saying it is taking “decisive and urgent action to save lives right now” with vaccine donations, manufacturing assistance and removing supply chain bottlenecks.

According to the United Nations, low and lower-middle-income countries need at least 2 billion doses this year to meet the baseline goal of vaccinating 40% of the population in every country by the end of 2021.

“We need to see a far more aggressive stance from this administration in scaling up production,” Krellenstein said. “It’s a shortage of vaccines. The answer is: make more vaccine production capacity. It’s very simple.”

Today President Biden announced our donation of another half billion doses of Pfizer vaccines for low and middle-income countries, bringing our donation total to over 1.1 billion. For every one shot we’ve put in an American arm, we’ve donated three shots globally. pic.twitter.com/bw720PATBH

Activists claimed production could increase if private companies agreed to share technology with other countries or if the government stepped in to compel them to license to global manufacturers.

“The reality is the untapped capacity of manufacturing exists right now,” said Russel outside Klain’s home. “Instead of showing the leadership the administration was elected and appointed to deploy, they’re cowering in the face of greed.”

Global health advocates in Boston brought a similar message to Bancel, because they believe the Moderna vaccine is the most viable for global distribution and the mRNA platform can be tweaked relatively easily to address new COVID-19 variants.

Moderna also received over $1 billion in taxpayer dollars to produce the vaccine under Operation Warp Speed. Its partnership with the National Institutes of Health also gave it access to billions of dollars of government-funded research into mRNA technology, conducted years before the pandemic.

Moderna has repeatedly refused to share its technology. In August, the company claimed it could not find partners with the right equipment or capacity. The company rejected an offer to license the vaccine through the World Health Organization’s COVID-19 Technology Access Pool (C-TAP), a resource for drug companies to share knowledge and increase supply.

Pfizer-BioNTech, Johnson & Johnson, AstraZeneca and Novavax have also refused to waive patent rights or share technology, according to a recent Amnesty International report. Out of the five companies, Pfizer was the only one that did not receive U.S. government funding to develop the vaccine.

“The world’s current shortage of COVID-19 vaccines is the result of deliberate policy choices made by pharmaceutical companies and the Biden Administration, not some inherent scientific or engineering limitation on expanding production capacity,” said Dr. Joia Mukherjee of Partners In Health and Harvard Medical School.

Activists also argued the president should use his authority to require that companies share the technologies that were subsidized by government to develop highly effective vaccines.

“We have a unique role because American taxpayers put billions of dollars down developing these vaccines,” Krellenstein said. “In many cases, they are our vaccines.”

Members of the group signaled that they would continue bringing their message to other pharmaceutical CEOs, including Albert Bourla of Pfizer.

President Biden proved earlier this year that he was willing to use the powers of the federal government to compel private companies to expand domestic vaccine production. In February, he invoked the Defense Production Act to provide manufacturing support to Pfizer and Moderna. He invoked it again in March to bring together pharmaceutical competitors Johnson & Johnson and Merck to overcome bottlenecks.

Activists were frustrated that the administration wasn’t using its tools to address the global shortage.

The White House has defended its global vaccination plan, which includes donating shots and engaging in international partnerships to increase production.

“I’m keeping the promise that America will become the arsenal of vaccines as we were the arsenal of democracy during World War II,” Biden said at the virtual global COVID-19 summit last week.

The U.S. is currently using funds allocated in the American Rescue Plan to scale up manufacturing plants in India and South Africa to be capable of producing 1 billion and 500 million vaccine doses respectively by the end of 2022.

Biden, along with other world leaders, committed to vaccinating 70% of the population of all countries by the middle of 2022.

Many wealthy nations have already vaccinated over 60% of their populations and places like the United States and European Union are starting to administer booster shots. Leaders at the World Health Organization and United Nations have expressed frustration with the U.S. and other countries over the stark vaccine inequities.

This month, the world fell short of its goal of having a minimum of 10% of the population of all countries vaccinated by September. Not a single low-income country reached that baseline.