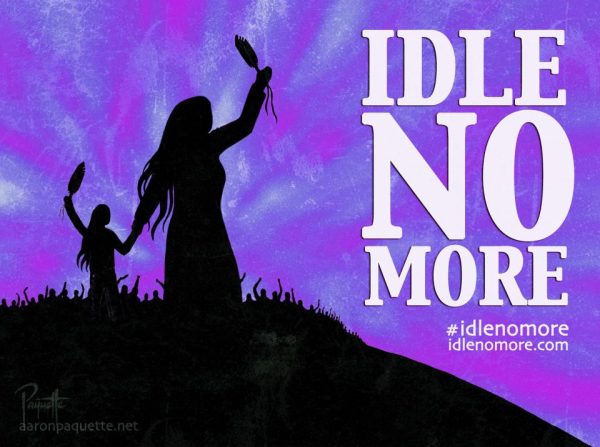 Canadian protests led by indigenous people are the latest incarnation of an age-old movement for life that doesn’t depend on infinite extraction and growth.

There’s a remote part of northern Alberta where the Lubicon Cree have lived, it is said, since time immemorial. The Cree called the vast, pine-covered region niyanan askiy, “our land.” When white settlers first carved up this country, they made treaties with most of its original inhabitants—but for reasons unclear, the Lubicon Cree were left out. Two hundred years later, the Lubicon’s right to their traditional territory is still unrecognized. In the last four decades, industry has tapped the vast resource wealth that lies deep beneath the pines; today, 2,600 oil and gas wells stretch to the horizon. This is tar sands country.

In 2012 testimony before the U.S. Congress, Lubicon Cree organizer Melina Laboucan-Massimo, then 30, described witnessing the devastation of her family’s ancestral land caused by one of the largest oil spills in Alberta’s history. “What I saw was a landscape forever changed by oil that had consumed a vast stretch of the traditional territory where my family had hunted, trapped, and picked berries and medicines for generations.”

“When we’re at home, we feel really isolated,” says Laboucan-Massimo, who has spent her adult life defending her people’s land from an industry that has rendered it increasingly polluted and impoverished. The Lubicon are fighting a hard battle, but their story—of resource extraction, of poverty and isolation, and of enduring resistance—is one that echoes in indigenous communities around the world. Today, Laboucan-Massimo and others like her are vanguards of a network of indigenous movements that is increasingly global, relevant—and powerful.

This power manifests in movements like Idle No More, which swept Canada last December and ignited a wave of solidarity on nearly every continent. Laboucan-Massimo was amazed—and hopeful. Triggered initially by legislation that eroded treaty rights and removed protection for almost all of Canada’s rivers—clearing the way for unprecedented fossil fuel extraction—Idle No More drew thousands into the streets. In a curious blend of ancient and high-tech, images of indigenous protesters in traditional regalia popped up on news feeds all over the world.

A history of resistance

To outsiders, it might seem that Idle No More materialized spontaneously, that it sprang into being fully formed. It builds, however, on a long history of resistance to colonialism that began when Europeans first washed up on these shores. Now, armed with Twitter and Facebook, once-isolated movements from Canada to South America are exchanging knowledge, resources, and support like never before.

Idle No More is one of what Subcomandante Marcos, the masked prophet of the Mexican Zapatistas, called “pockets of resistance,” which are “as numerous as the forms of resistance themselves.” The Zapatistas are part of a wave of indigenous organizing that crested in South America in the 1990s, coinciding with the 500th anniversary of European conquest—most effectively in Bolivia, Ecuador, and Mexico. Certain threads connect what might otherwise be isolated uprisings: They’re largely nonviolent, structurally decentralized, they seek common cause with non-natives, and they are deeply, spiritually rooted in the land.

The connections among indigenous organizers have strengthened through both a shared colonial history and a shared threat—namely, the neoliberal economic policies of deregulation, privatization, and social spending cuts exemplified by the North American Free Trade Agreement (NAFTA) and the World Trade Organization. Indigenous organizers see these agreements as nothing more than the old colonial scramble for wealth at the expense of the natives. In a 1997 piece in Le Monde Diplomatique, Marcos called neoliberalism “the totalitarian extension of the logic of the finance markets to all aspects of life,” resulting in “the exclusion of all persons who are of no use to the new economy.” Many indigenous leaders charge that the policies implemented through organizations like the World Bank and the IMF prioritize corporations over communities and further concentrate power in the hands of a few.

The mid-1990s saw a massive expansion of such policies—and with it, an expansion of resistance, particularly in countries with significant indigenous populations. In 1990, CONAIE, the Confederation of Indigenous Nationalities of Ecuador, staged a massive, nonviolent levantamiento—an uprising—flooding the streets of Quito, blocking roads and effectively shutting down the country. Entire families walked for days to reach the capital to demand land rights, fair prices for agrarian goods, and recognition of Ecuador as a plurinational state, made up of multiple, equally legitimate nations. In the end it forced renegotiation of policy and created unprecedented indigenous representation in government; many hailed CONAIE’s success as a model for organizing everywhere.

CONAIE’s slogan, “Nothing just for Indians,” invited participation from non-indigenous allies around larger questions of inequality and political representation, creating a political space that was big and inclusive enough for everyone. Dr. Maria Elena Garcia, who studies these movements at the University of Washington, says that non-indigenous support has been “crucial” for success across the board. In the case of CONAIE, she says, there came a tipping point when “most Ecuadorians … said, ‘Enough. This organization is speaking for us.’”

Meanwhile, in Mexico, the Zapatista movement was busy building a different kind of revolution. On January 1, 1994, the Zapatista Army took its place on the international stage. It was day one of NAFTA, which Subcomandante Marcos called “a death sentence to the indigenous ethnicities of Mexico.” More than any other movement, they linked local issues of cultural marginalization, racism, and inequality to global economic systems and prophesied a new movement of resistance. The media-savvy revolutionaries used their most potent weapon—words—and the still-new Internet to advocate a new world built on diversity as the basis for ecological and political survival. Transnational from the beginning, the Zapatistas made common cause with “pockets of resistance” everywhere.

Then, a curious change occurred: for nearly 10 years following their initial insurgency, the Zapatistas maintained a self-imposed silence. The world heard little from Marcos, but the autonomous communities in Chiapas were very much alive. They had turned inward, building independent governments, schools, and clinics. As journalist and author Naomi Klein observed, “These free spaces, born of reclaimed land, communal agriculture, resistance to privatization, will eventually create counter-powers to the state simply by existing as alternatives.” Embodying, here and now, the society they seek to create is a powerful manifesto; for those who cared to listen, their silence spoke volumes.

Most of these movements have used nonviolent tactics, including blockades, occupations of public space, and mass marches—combined with traditional political work—to varying degrees of success. In Bolivia these tactics yielded an extraordinary outcome: the election of Evo Morales, in 2005, as Bolivia’s first indigenous head of state.

Five years later, Morales convened 30,000 international delegates for the World People’s Conference on Climate Change and the Rights of Mother Earth. A response to the repeated failure of international climate negotiations, the gathering was rooted in an indigenous worldview that recognized Mother Earth as a living being, entitled to her own inalienable rights.

The resulting declaration placed blame unequivocally on the capitalist system that has “imposed on us a logic of competition, progress, and limitless growth.” This unrestrained growth, the declaration says, transforms “everything into commodities: water, earth, the human genome, ancestral cultures, biodiversity, justice, ethics, the rights of peoples, and life itself.” Significantly, the declaration also extended the analysis of colonialism to include climate change—calling for “decolonization of the atmosphere”—but it rejected market-based solutions like carbon trading. It’s a holistic analysis that links colonialism, climate change, and capital, a manifesto for what has come to be called “climate justice.”

Fast forward to December 2012, and two things happened: The Zapatistas staged simultaneous marches in five cities, marking a resurgence of their public activism. Anywhere from 10,000–50,000 masked marchers filled the streets in complete silence. The march was timed to coincide with the end of the Mayan calendar—and the beginning of a new, more hopeful era—and demonstrated the Zapatistas’ commitment to the indigenous cosmology of their ancestors.

That same month, a continent away, Idle No More emerged on the scene. While it began as a reaction to two specific bills in Parliament, it has gained strength and momentum in opposition to the network of proposed pipelines that will crisscross North America, pumping tar sands oil from Alberta to refineries and ports in Canada and the U.S. These pipelines will cross national, tribal, state, and ethnic boundaries and raise a multitude of issues—including water quality, land rights, and climate change. The campaign to stop their construction is already unifying natives and non-natives in unprecedented ways.

“We’re a land-based people, but it goes further than that. It’s a worldview. When you destroy the earth, you destroy yourself,” says Melina Laboucan-Massimo. This is “the common thread in indigenous people all over the world.”

It is this thread that goes to the heart of our global ecological crisis. While indigenous cultures differ widely from one another, what they collectively present is an alternative relationship—to the earth, to its resources, and to each other—a relationship based not on domination but on reciprocity. Any movement that seeks to create deep, lasting social change—to address not only climate change but endemic racism and social inequality—must confront our colonial identity and, by extension, this broken relationship.

Laboucan-Massimo has spent a great deal of time abroad, studying indigenous movements from Latin America to New Zealand and Australia, feeling the full weight of their shared history under colonialism. These days, though, she’s more likely to be on the road, educating, organizing, and building solidarity among natives and non-natives. It was understanding the connections between movements, she says, that gave her “all the more fervor to come back and continue to do the work here.”

Recently, she traveled from Alberta  to the National Mall in Washington, D.C., where she and her elders stood at the forefront of the largest climate change rally in history. And she’ll keep organizing, armed with a smartphone, supported by a growing network of allies from Idle No More and beyond, connected in every possible way to the rest of the world.

Kristin Moe wrote this article for Love and the Apocalypse, the Summer 2013 issue of YES! Magazine. Kristin is a writer, farmer, and graduate of the Salt Institute for Documentary Studies. She writes about climate justice, grassroots movements, and social change.