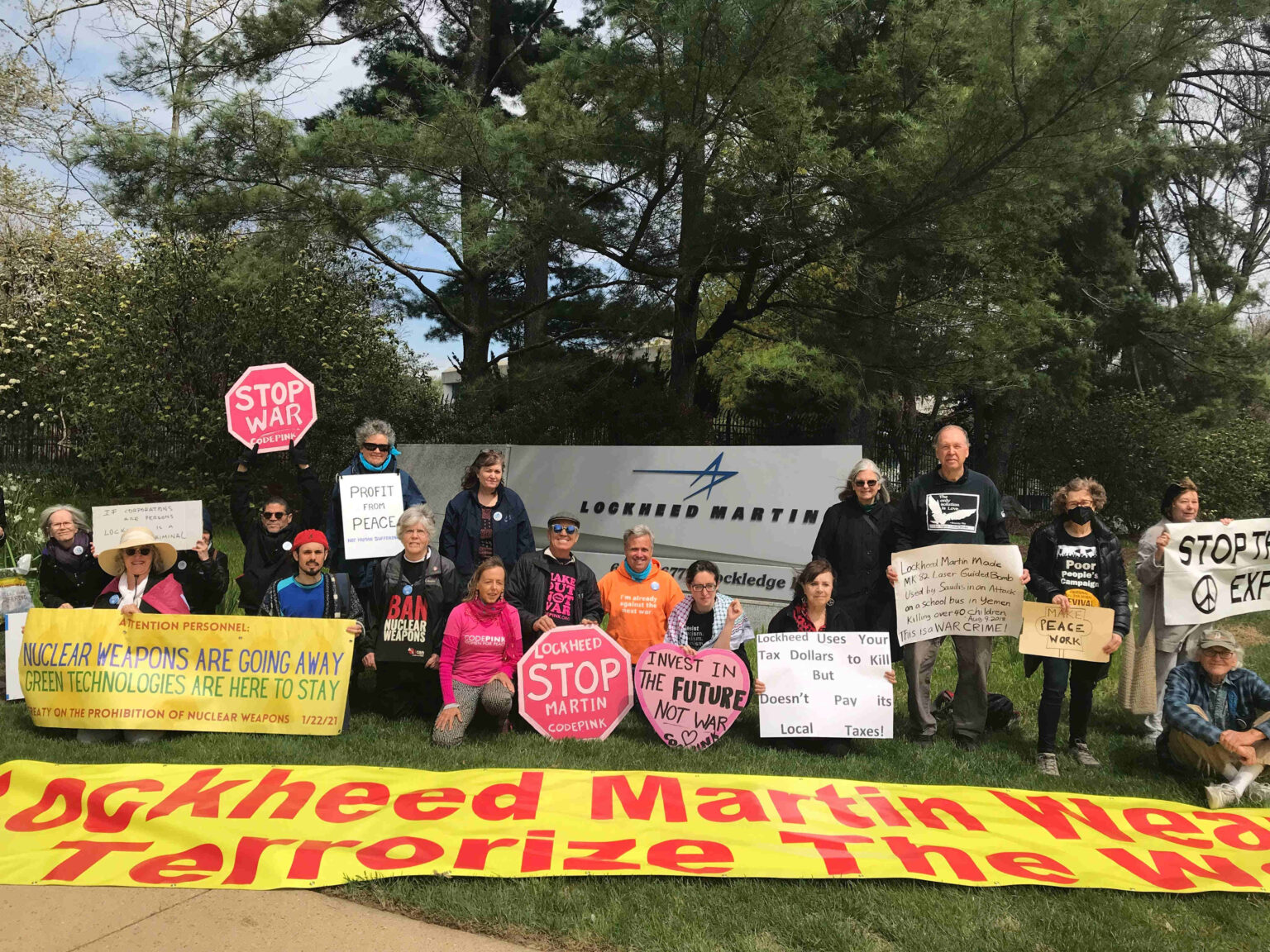 Global Mobilization Kicks Off To #StopLockheedMartin

At Lockheed Martin HQ During Its Annual General Meeting.

Today, the day of Lockheed Martin’s annual meeting, begins a week of actions around the world. These included a demonstration and a petition delivery at the company’s headquarters in Bethesda, Maryland, this morning.

Reports, photos, and videos from actions around the world are being posted athttps://act.worldbeyondwar.org/stoplockheedmartin

Activists delivered a petition to Lockheed Martin’s headquarters during its (virtual) annual general meeting, calling on Lockheed to begin work on conversion to non-deadly industries. They held colorful banners, and demonstrated in front of the Bethesda, Maryland, building, and then paraded half a mile to an overpass and displayed their banners over the highway (I-270) with messages including “Lockheed Martin weapons terrorize the world.” Participating were members of World BEYOND War, RootsAction.org, CODEPINK, MD Peace Action, MilitaryPoisons.org, and Veterans For Peace Baltimore Phil Berrigan Memorial Chapter.

“Thank goodness,” said David Swanson, Executive Director of World BEYOND War, “people are still permitted and still wanting to protest grotesque war profiteering even during a months-long flood of pro-war media. It’s time to return some shame to one of the world’s most shameful activities.”

Weapons often come with “lifetime service agreements” in which only Lockheed can service the equipment.

Lockheed Martin weapons have been used against the people of Yemen, Iraq, Afghanistan, Syria, Pakistan, Somalia, Libya, and many other countries. Apart from the crimes its products are manufactured for, Lockheed Martin is frequently found guilty of fraud and other misconduct.

Lockheed Martin is involved in U.S. and UK nuclear weapons, as well as being the producer of the horrific and disastrous F-35, and the THAAD missile systems used to escalate tensions around the globe and manufactured in 42 U.S. states the better to assure Congress members’ support.

In the United States in the 2020 election cycle, according to Open Secrets, Lockheed Martin’s affiliates spent almost $7 million on candidates, political parties, and PACs, and almost $13 million on lobbying including almost a half a million each on Donald Trump and Joe Biden, $197 thousand on Kay Granger, $138 thousand on Bernie Sanders, and $114 thousand on Chuck Schumer.

The U.S. State Department is effectively a marketing arm of Lockheed Martin, promoting its weapons to governments.

Congress members also own stock in and profit from Lockheed Martin’s profiting, including from the latest weapons shipments to Ukraine. Lockheed Martin’s stocks soar whenever there’s a new big war. Lockheed Martin brags that war is good for business. One Congresswoman bought Lockheed Martin stock on February 22, 2022, and the next day tweeted “War and rumors of war is incredibly profitable…”