The myriad protests from Istanbul to São Paulo have one thing in common – growing dissent among the young, educated and better-off protesting against the very system that once enriched them. And therein lies the danger for governments 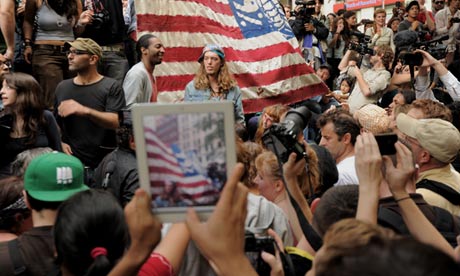 The demonstrations in Brazil began after a small rise in bus fares triggered mass protests. Within days this had become a nationwide movement whose concerns had spread far beyond fares: more than a million people were on the streets shouting about everything from corruption to the cost of living to the amount of money being spent on the World Cup.

In Turkey, it was a similar story. A protest over the future of a city park in Istanbul – violently disrupted by police – snowballed too into something bigger, a wider-ranging political confrontation with prime minister Recep Tayyip Erdogan, which has scarcely been brought to a close by last weekend’s clearing of Gezi Park.

If the recent scenes have seemed familiar, it is because they shared common features: viral, loosely organised with fractured messages and mostly taking place in urban public locations.

Unlike the protest movement of 1968 or even the end of Soviet influence in eastern Europe in 1989, these are movements with few discernible leaders and often conflicting ideologies. Their points of reference are not even necessarily ideological but take inspiration from other protests, including those of the Arab spring and the Occupy movement. The result has seen a wave of social movements – sometimes short-lived – fromWall Street to Tel Aviv and from Istanbul to Rio de Janeiro, often engaging younger, better educated and wealthier members of society.

What is striking for those who, like myself, have covered these protests is often how discursive and open-ended they are. People go not necessarily to hear a message but to take over a location and discuss their discontents (even if the stunning consequence can be the fall of an autocratic leader such as Egypt‘s Hosni Mubarak). 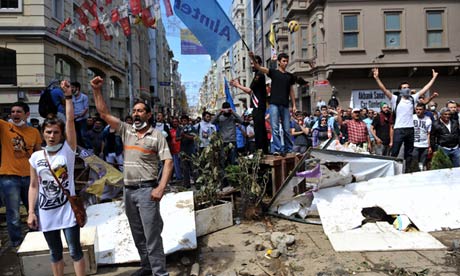 Demonstration against the demolition of Gezi Park in Istanbul. Photograph: Ozan Kose/AFP/Getty ImagesIf the “new protest” can be summed up, it is not in specifics of the complaints but in a wider idea about organisation encapsulated on a banner spotted in Brazil last week: “We are the social network.”

In Brazil the varied banners underlined the difficulty of easy categorisation as protesters held aloft signs expressing a range of demands from education reforms to free bus fares while denouncing the billions of public dollars spent on stadiums for the 2014 World Cup and the Olympics two years later.

“It’s sort of a Catch-22,” Rodrigues da Cunha, a 63-year-old protester told the Associated Press. “On the one hand we need some sort of leadership, on the other we don’t want this to be compromised by being affiliated with any political party.”

As the Economist pointed out last week, while mass movements in Britain, France, Sweden and Turkey have been inspired by a variety of causes, including falling living standards, authoritarian government and worries about immigration, Brazil does not fit the picture, with youth unemployment at a record low and enjoying the biggest leap in living standards in the country’s history.

So what’s going on? An examination of the global Edelman Trust Barometer reveals a loose correlation between the ranking of a country on the trust scale and the likelihood of protests. The trust barometer is a measure of public confidence in institutions compiled by the US firm Edelman, the world’s largest privately owned PR company.

In 2011, at the time the Occupy movement was being born in Zuccoti Park on Wall Street, the UK and the US were both firmly placed at the bottom of the “distrusters” while Brazil topped the “trusters”. By this year Brazil had dropped 30 points on the table, while Spain and Turkey, which have both seen protests this year, were both in the distrusted category.

Paul Mason, economics editor of BBC2’s Newsnight and author of Why It’s Kicking Off Everywhere: The New Global Revolutions, has argued that a key factor, largely driven by new communication technologies, is that people have not only a better understanding of power but are more aware of its abuse, both economically and politically.

Mason believes we are in the midst of a “revolution caused by the near collapse of free-market capitalism combined with an upswing in technical innovation” – but not everyone is so convinced. 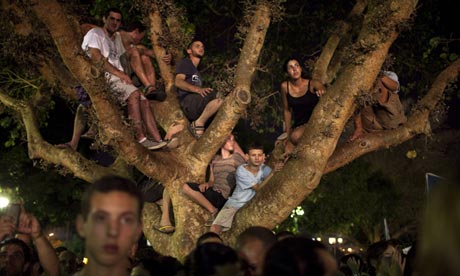 Protesters in Tel Aviv in September 2011. Photograph: Menahem Kahana/AFP/Getty ImagesWhat does ring true, however, is his assertion that a driving force from Tahrir Square to Occupy is a redefinition of notions of both what “freedom” means and its relationship to governments that seem ever more distant. It is significant, too, that many recent protests have taken place in the large cities that have been most transformed by neoliberal policies.

Tali Hatuka, an Israeli urban geographer, whose book on the new forms of protest will be published next year, identifies the mass mobilisations against the Iraq war in 2003 as a turning point in how people protest. Hatuka argues that, while previous large public protests had tended to be focused and narrow in their organisation, the Iraq war protests saw demonstrations in 800 cities globally which encompassed and tolerated a wide variety of outlooks.

“Most recently,” Hatuka wrote in the journal Geopolitics last year, “this spirit has characterised the Arab spring and New York’s Occupy Wall Street, which were protests based on informal leadership and a multitude of voices.”

“Up to the 1990s,” she said last week, “protests tended to be organised around a pyramid structure with a centralised leadership. As much effort went into the planning as into the protest itself. And the [impact on the] day after the protest was as significant as the event itself. Now protest is organised more like a network. It is far more informal, the event itself often being immediate.”

Hatuka cautions against generalising too much – distinguishing between the events of the Arab spring, where mass protests were able to remove regimes, and protests in western democracies. But she does point to how the new form of protest tends to produce fractured and temporary alliances.

“If you compare what we are seeing today with the civil rights movement in the US – even the movements of 1989 – those were much more cohesive. Now the event itself is the message. The question is whether that is enough.”

She suspects it is not, pointing to how present-day activism – from the Iraq war demonstrations onwards – has often failed to deliver concrete results with its impact often fizzling out. Because of this, current forms of protest may be a temporary phenomenon and may be forced to change.

Another key feature of the new protests, argues Saskia Sassen, a sociology professor at Columbia University, New York, is the notion of “occupation” – which has not been confined to the obvious tactics of the Occupy movement. Occupations of different kinds have occurred in Tahrir Square, Cairo, in Gezi Park, Istanbul, and during widespread social protests in Tel Aviv, the Israeli capital, in 2011.

“Occupying is not the same as demonstrating. Many of the [recent] protests made legible the fact that occupying makes novel territory, and thereby a bit of history, using what was previously considered merely ground,” Sassen wrote recently. “Whether in Egypt, the US, or elsewhere, it is important that the aim of the occupiers is not to grab power. They were and are, rather, engaged in the work of citizenship, exposing deep flaws and wrongs in their polity and society.

“This is a very peculiar moment,” Sassen told the Observer. “This form of protest is very amorphous in comparison with the movements that came before.” She argues that one distinguishing factor is that many of the protest movements of the past decade have been defined by the involvement of what she calls “the modest middle class”, who have often been beneficiaries of the systems they are protesting against but whose positions have been eroded by neoliberal economic policies that have seen both distribution of wealth and opportunities captured by a narrowing minority. As people have come to feel more distant from government and economic institutions, a large part of the new mass forms of dissent has come to be seen as an opportunity to demonstrate ideas of “citizenship”.

“Often what people are saying is that you are the state. I’m a citizen. I’ve done my job. You’re not recognising that.”

Sassen’s belief that many of the recent protests are middle-class-driven appeared to be confirmed overtly – in the case of Brazil, at least – by President Dilma Rousseff, when she acknowledged that the new middle classes “want more and have the right to more”.

For an older generation of political theorists, as Sassen admits, not least those from a Marxist background, the current trends have sometimes been puzzling. “I remember talking to [British Marxist historian] Eric Hobsbawm – a dear friend. He asked me: ‘What’s up [with Occupy]?’ I said it is a very interesting movement. But his reply was: ‘If there is no party, then there’s no future.'”

Indeed, it was precisely this concern two years ago that led Malcolm Gladwell – in a controversial essay for the New Yorker, Small change: why the revolution will not be tweeted – to ask a similar question: whether networks of activists modelled on social media and with “weak tie-ins” can sustain themselves in the long run.

“The old pyramid way of organising protests does have its limitations, but so too do the new ways of organising,” says Hatuka. “Often it does not feel very effective in the long run. People will often go for a day or two and these protests are not necessarily offering an ideological alternative.”