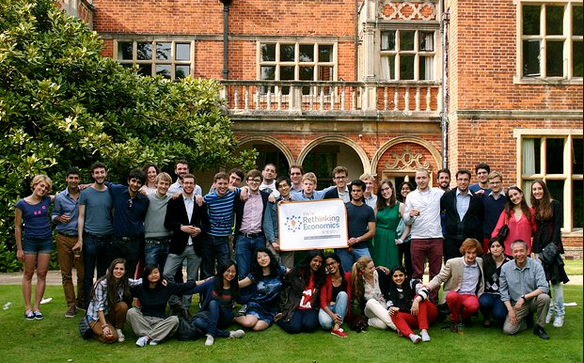 When the financial crisis hit in 2007, economics students at respected institutions around the world found that theories handed down in classrooms failed to explain the reality outside, and an international movement began to demand a change in the way economics is taught.

“The crash was a wake-up call,” says Yuan Yang, who started her undergraduate studies in Philosophy and Economics at Balliol College, Oxford, at the height of the crisis in 2008. “On the one hand, we were being taught as if the financial system was not an important part of the economy. And on the other hand, what the markets were doing was quite different, so we asked, ‘Why is there this disconnect?’”

Yang got talking to fellow students in London, Cambridge and Manchester, and founded Rethinking Economics to explore alternative ways of understanding and learning about today’s real economics.

The group is currently working on a manifesto that calls for a complete overhaul of curricula at U.K. economics departments. Students in the U.S., Canada, Israel, Brazil, Argentina, Chile, Germany, France, and New Zealand are making similar demands.

Neoclassical theory dominates university economics departments the world over. Yet despite the many schools of thought and ideological viewpoints espoused by neoclassical economists – from free market fundamentalists to those who believe the state should play an active role in the economy – none were able to predict the current crisis.

The French student organization Pour un Enseignement Pluraliste dans le Supérieur en Économie (PEPS-Économie), frames the crisis as “not only of the economy, but a crisis of economics itself – and a crisis in its teaching.”

“Not long before the crisis, in the neoclassical macroeconomic model you didn’t even have the possibility of a crisis,” says PEPS-Économie’s Louison Cahen-Fourot. “There was no way you could understand what was going on at the time with the model of neoclassical economics. If you go to Marxist economics, or institutional economics, or post-Keynesian economics, some people were warning for quite some time that something was going wrong. But as these approaches are not taught – or barely taught – students didn’t know about that.”

The most vocal heterodox economist to sound the alarm was post-Keynesian Steve Keen, who predicted in 2005 that skyrocketing private debt would precipitate a global economic crisis, and has called for economics students of today’s “lost generation” to occupy their universities.

“You don’t get into as disastrous a situation as we are in now without extraordinarily bad thinking, and the economics departments were the source of that bad thinking,” Keen told the BBC.

The student campaigners say one reason for such bad thinking is the discipline’s pretentions towards “hard science.” Seduced by the elegance of mathematical equations, and by the superior marketability of solid predictions in a world “radical uncertainty” – something Cahen-Fourot describes as a “central tenet of heterodox economics” – neoclassical economists work on the assumption that actors in the economy can be relied upon to make rational and predictable choices aimed at maximum selfish gain.

“Economists have always wanted to be like more physicists and mathematicians, who make predictions about the world that are borne out to a high degree of accuracy,” says Yang. “Neoclassical economics skips past a lot of what motivates people’s behavior. We’re being taught economics as if it’s a physical science.”

While there is fierce debate between mainstream economists over how much emphasis should be put on mitigating factors such as unpredictable human behavior, and the extent to which market forces should be subject to state regulation, their heterodox critics say both sides start from a basic set of assumptions that are far from uncontroversial. “We might discuss different theories, but the models are still discussed within one neoclassical framework,” says Yang. “There is a very strong set of ethical values and politics implicit in the model… It excludes other ways of thinking about the world.”

A key example is the emphasis placed on efficiency, says James K. Boyce, who teaches economics at the University of Massachusetts, Amherst, and is a founding member of Econ4, a group of economists working to change the way their discipline is practiced and presented to the public.

“Neoclassical economics elevates one specific economic criterion, ‘efficiency,’ to primacy over all other goals… neoclassical economists have a very definite idea of what it means to be efficient, and that is to create the biggest possible pile of dollars,” says Boyce, “and you don’t worry about how those dollars are distributed.”

Boyce argues that this approach fails to take into account the increased worth of a dollar to the poor compared to the very rich, inevitably favoring policies that boost the wealth of the 1 percent with the greatest spending power. It also ignores competing values such as sustainability, freedom, human rights and human wellbeing – and disingenuously positions these value judgments as apolitical.

“Free market fundamentalism in particular, and the neoclassical blinkers more generally, are certainly more convenient from the standpoint of the people at the top of the pyramid,” says Boyce. “The persistence of that type of economics is probably not unrelated to the fact that this is a set of disguised value judgments that are quite amenable to maintaining the current distribution of wealth and power.” Over recent decades U.S. economic policy has been largely dictated by neoliberal economics, a branch of neoclassical theory in which efficiency isn’t just a goal, but an inherent feature of free markets. In the 1960s, the University of Chicago’s Milton Friedman challenged the prevailing Keynesian view that markets are inherently unstable and that the state must act to temper the extremes of the boom-and-bust cycle. According to Friedman, free markets left to their own devices will achieve optimum efficiency and the greatest good for all.

Applied the financial sector in the 1990s, neoliberal theory, and in particular Eugene Fama’s efficient market hypothesis – which says that financial markets correctly price assets according to available information – translated into massive deregulation, and in turn, the subprime mortgage crisis.

Chicago School theory had already been aggressively applied to other sectors since the late 1970s. Friedman himself acted as economics adviser to Ronald Reagan, and to Margaret Thatcher in the U.K. Both enthusiastically took up the cause of laissez-faire capitalism at home and abroad.

By the mid 1990s, a neoliberal agenda of drastically reducing the size of the state while deregulating the private sector had been embraced by the International Monetary Fund. But as early as 1975, Chilean dictator Augusto Pinochet charged a team of economists trained under Friedman with remodeling his country’s economy. Brought to Chicago as part of a project funded by the U.S. State Department to counter socialism in Latin America, they came home to implement a radical program of privatization, deregulation and public spending cuts.

After the Chilean economy collapsed in 1982 and unemployment soared to 20 percent, many of the “Chicago Boys”’ reforms were reversed. But the privatization of education remained and in 2011, student protests swept the country demanding the end of a system where only the rich can afford a decent education. It was in this wave of direct action that economics students from several of Chile’s major universities founded Estudios Nueva Economía (ENE). For them, the relationship between economics, politics and history is hard to ignore.

“We had massive protests against the unequal situation and at the end of that year we started to think about not just the economy, but the economics,” says Felipe Correa Mautz, an economics undergraduate student at the University of Santiago.

“The situation here is very particular because under the Pinochet dictatorship all the economists on the political left were killed or exiled. Only the neoliberal Chicago economists remained and the teaching and thinking in economics today is a legacy of that.”

But like its counterparts in Europe, ENE isn’t looking to replace teaching that upholds the status quo with theory that serves a left-wing agenda. Rather, the aim is pluralism. PEPS-Économie in particular has laid out a detailed proposal for a curriculum that would cover different schools of economic thought and place them in the context of both the history of the discipline as well as other social sciences – history, politics, sociology, anthropology and so on – to equip students with a greater range of tools to analyze real-world scenarios and look critically at their own discipline.

“It’s not that we think we can’t learn anything from neoclassical economics, or that all its methodologies are useless,” says Yang. “As with any social science, it’s difficult to get one theoretical framework that can envelop all the different facets of society – especially in economics, where different views have really profound social and political implications.”

Even within the field of heterodox economics that opposes the neoclassical orthodoxy, there is vast range of theories and approaches. Post-Keynesian, ecological, Marxist, feminist, Austrian and institutional economists can hold radically different views. One of the most controversial current debates is over the assumption that economic growth can or should be pursued without limit.

“Ecological economists acknowledge the limits to growth and they are increasingly in dialogue with post-Keynesian and Marxist economists,” says Cahen-Fourot. “But that’s not always easy because historically, for example, the main concern of post-Keynesian economics has been how to reach sufficient growth to have better income distribution and reduce inequalities. So when you come to these people who have been working on these issues all their lives and you tell them that we need to acknowledge limits to growth, it’s kind of a cultural challenge for them.”

Recalling debates at a conference of heterodox economics organized by the Hans Böckler Foundation in Berlin last year, Cahen-Fourot says there was a distinct generational divide over the question of growth. “Most young people had no problem saying that we should take into account that there are limits to growth, whereas older people seem to have much more of a problem acknowledging that,” he says. “But it’s changing.”

Boyce points out that other central assumptions, made when he was a student in the 1980s – such as the conventional wisdom among development economists that there had to be a pay-off between equity and growth – have since been challenged within mainstream economic thinking. “The financial crisis has created further opportunities for moving that process forward,” he says.

Rethinking Economics is in discussion with CORE, an initiative of the New York-based Institute for New Economic Thinking (INET) that is developing a pluralistic curriculum to be made freely available to universities this year. The group that University College London and Warwick University in the U.K., and Sydney University in Australia have expressed an interest.

In November, PEPS-Économie met with the Ministry of Higher Education and Research, and Mautz says that a more pluralistic approach is beginning to be embraced by some Chilean universities – though not yet to the extent ENE would like to see.

If, as the signs suggest, humankind is looking at future challenges that will dwarf the current global economic slump, we will be forced to revise many deeply held assumptions in search for better ways to organize our societies and mange increasingly scarce resources. And if these students have their way, then perhaps the economics schools of the future will come up with the kind of radical thinking to meet those demands.