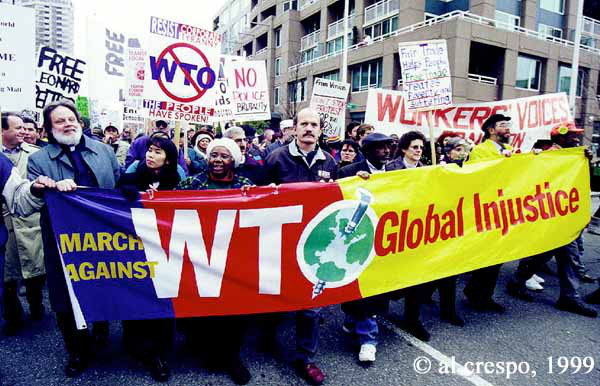 Note: The approach of global trade is not working for most people in the world.  The failure of the World Trade Organization (WTO) to move forward is one more example of a failed approach.  The Trans-Pacific Partnership and the Atlantic version, TAFTA, are additional examples.  The WTO and these trade agreements pursue a path that puts profits ahead of the necessities of the people and the planet.  They have expanded the wealth divide, destroyed the environment and undermined the rights of workers.  Unlike the spokesperson from the United States in the article below, we are pleased to see this failure.  Our view is that an entirely new approach is needed to international trade.  We need to change the goals of trade and the method of reaching agreements on trade.  The new goals should be one of cooperation, not domination; it should put the people and planet before process.  The approach to achieve trade for the benefit of people and planet should not be one of secrecy and participation by transnational corporations, as the current approach takes but rather one of transparency and participation of civil society in creating economic democracy.  These negotiations are creating international laws, the people affected by those laws should participate in making them.

Earlier today, the head of the World Trade Organization (WTO) acknowledged that negotiators had “failed to find convergence” on a complete a trade package – including a Trade Facilitation Agreement – ahead of the Ninth Ministerial Conference in Bali next week. “Failure in Bali will have grave consequences for the multilateral trading system,” WTO Director General Roberto Azevedo said in his remarks to the WTO General Council.

U.S. Ambassador to the WTO Michael Punke said, in his remarks today, the United States agreed with Director General Azevedo’s assessment that the Geneva process has run its course – with a handful of countries blocking the majority from achieving success on a trade facilitation deal that could boost global economic output by close to $1 trillion dollars through improved customs procedures. “I must say it is with a great deal of sadness that I deliver this statement today,” he said. Hopes were high that the WTO would address trade facilitation and information technology liberalization to cut red tape and unnecessary costs at the border. Manufacturers, who have pushed for this trade facilitation pact, are also disappointed at the stalemate.

Much of the blame falls at the feet of India, which has pushed for a change in WTO rules that would allow the nation to exceed the current cap on trade-distorting farm subsidies. Last week, negotiators were poised to reach a compromise that would allow India to exceed its spending cap for four years without challenge from WTO members. India, however, wanted a commitment for a permanent solution.

Earlier this year, the NAM sent a coalition letter in support of the WTO Trade Facilitation Agreement with 16 associations from around the world joining as cosigners. New research is demonstrating the value of trade facilitation policies, and the NAM will continue to push for binding multilateral trade facilitation commitments, as well as improved trade facilitation outcomes in the TPP and TTIP agreements.

Director General Azevedo also noted that the Trade Facilitation Agreement “would deliver jobs and opportunities in times of unemployment and slow growth. It would also deliver technical assistance and capacity building for the better integration of developing and least developed countries into global trade flows.”

No more talks are planned this week in Geneva, and it remains unclear how negotiators could resolve differences before the Bali meetings scheduled to start on December 3. Nevertheless, Director General Azevado urged WTO members to continue working toward a resolution. “If we are to get this deal over the line it will need political engagement — and political will,” he said.