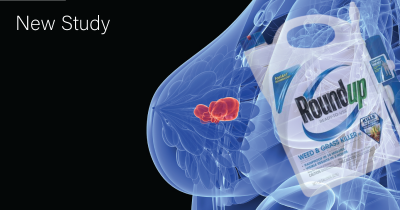 A newly published study adds to the ever-growing pile of evidence in support of the cancer-causing potential of the weedkiller active ingredient glyphosate. Glyphosate herbicides like Roundup are used on over 85% of genetically modified crops.

The new study shows that a very low concentration of glyphosate (in the parts per trillion range and thus environmentally relevant for everyone) can trigger breast cancer when combined with another risk factor.

In the study, scientists exposed noncancerous human breast cells to glyphosate in vitro over a course of 21 days. The cells were then placed in mice to assess tumour formation. Although cells exposed to glyphosate alone did not induce tumour growth, cancerous tumours did develop after glyphosate was combined with a type of gene regulatory molecule that is present in all humans.

The process in detail

The study showed that exposure to glyphosate led to a marked reduction in the levels of a molecular tag on the DNA that is known as methylation. Further, the authors of the study revealed the mechanism by which this takes place. The glyphosate induced a several-fold increase in a protein called TET3, which is known to remove methylation tags from DNA.

Normally when the DNA of a gene is tagged by methylation, it is not expressed. When the methylation tags are removed, the gene can be reactivated. Such changes in gene function caused by alterations in the profile of DNA methylation tags are known to be a contributing factor to cancer formation (carcinogenesis).

This appears to have been the case in this study, as when a second cancer-inducing agent was combined with the glyphosate, this led to the transformation of the human breast cells to a cancerous state.

The second cancer-inducing agent was a class of small RNA molecules known as microRNA, which are involved in the regulation of gene expression. In the new study, the alterations in gene function induced by glyphosate through the removal of the DNA methylation tags, combined with the changes in gene function caused by the addition of microRNA-182-5p (miR182-5p), led to the formation of breast cancer cells.

micro-RNA182-5p is a naturally occurring gene regulatory molecule that is present in everyone. Dysfunction of microRNA182-5p has been linked with cancers of different types.

However, it is still not known whether what was observed in the human breast cells in the new study also applies to other cell types in the body.

One worrying aspect of this study is that this very low concentration of glyphosate resulted in the increased expression of the TET3 gene and the wide-scale alteration in the profile of DNA methylation tags in the breast cells.

Dr Michael Antoniou of King’s College London, one of the peer reviewers of the study, commented, “These observations highlight for the first time a possible biomarker of glyphosate activity at the level of gene expression that could be linked with breast cancer formation. It would be interesting to investigate correlations between people’s history of exposure to glyphosate herbicide, increased levels of TET3 activity, and breast cancer incidence.”

The mechanism whereby glyphosate induced alterations in the profile of DNA methylation tags by increasing the levels of TET3 protein may help explain the finding of the team led by Prof G-E Séralini, that a very low dose of Roundup herbicide fed to rats over a 2-year period led to a highly statistically significant increase in mammary tumour incidence.

Another concerning aspect of the new study was pointed out by one of the authors, Sophie Lelièvre, a professor of cancer pharmacology at Purdue’s College of Veterinary Medicine. She said, “What was particularly alarming about the tumour growth was that it wasn’t the usual type of breast cancer we see in older women. It was the more aggressive form found in younger women, also known as luminal B cancer.”

Lelièvre added, “There is a huge gap in the research that is targeted at understanding why cancer develops. This discovery is novel, primarily because until now, there hasn’t been any scientific evidence to show that a second factor when associated with common pollutants would be sufficient for cancer to develop. It’s very difficult to determine what causes breast cancer, but this is a critical step forward in the right direction so we can start working toward prevention as we have outlined in the international collaborative work of IBCN (www.purdue.edu/breastcancer).”

Cancer incidence continues to rise globally, with breast cancer being the most common type, according to Cancer.gov. Lelièvre said those facts alone continue to fuel the motivation for her research with the hope of eventually finding a way to prevent cancer before it even starts.

“There has been a heavy focus on research for both treatment and detection, but prevention just isn’t as prevalent,” Lelièvre said. “If we can find a way to mitigate the risks, we can have hope for fewer cases.”

GMWatch would add that the obvious way to reduce our cancer risk is to avoid exposure to glyphosate herbicides.

The new study was carried out by a collaborative team of scientists at Purdue University in Indiana, USA and the Institut National de la Santé et de la Recherche Médicale (INSERM)/Institut de Cancérologie de L’Ouest (ICO) in Nantes, France. The Purdue Center for Cancer Research worked with ICO, the Cancer Center for Western France, as part of an agreement with the Purdue-led International Breast Cancer and Nutrition (IBCN) initiative. The work was published in Frontiers in Genetics. It was funded by the National League Against Cancer in France (Ligue Nationale Contre le Cancer).

In 2015, the World Health Organization’s International Agency for Research on Cancer said glyphosate was a probable carcinogen.  Research published in 2017 also associated exposure to glyphosate-based herbicides with non-Hodgkin lymphoma.

Three high-profile court cases in the US brought by cancer sufferers against glyphosate herbicide manufacturer Bayer have found that exposure to glyphosate herbicides was a significant contributing factor to the plaintiffs’ non-Hodgkin lymphoma. The cases have resulted in damages of millions of dollars being awarded against Bayer.