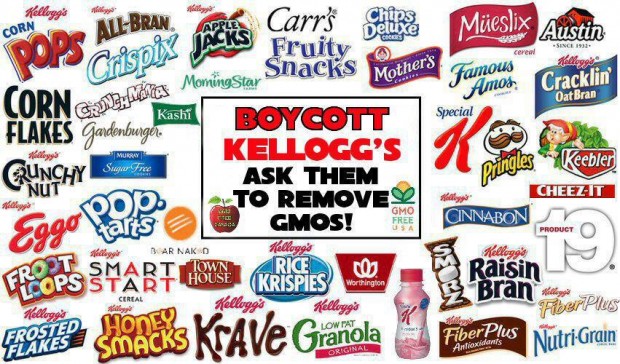 Part of GMO Free USA’s mission is to foster consumer rejection of GMOs until they are proven safe. Because it is difficult to rally the nation to boycott ALL GMO foods, we’ve chosen to use strategically targeted boycotts to change our broken food system. As it has happened in other countries, when one Big Food company is forced to remove GMOs, their competitors are at a disadvantage and soon follow.

Kellogg’s was chosen as our first boycott for many reasons:

As an American icon since 1906, Kellogg’s must step up and be a leader among Big Food companies.

Kellogg’s heavily markets to children and presents the company with a wholesome family image. According to the Rudd Center for Food Policy & Obesity at Yale University, marketing of cereals to children has increased significantly over the years. RCFPO’s first study found that the least healthy breakfast cereals are those most frequently and aggressively marketed directly to children as young as age two. Kellogg’s is one of two companies that led in child-targeted marketing, in spite of their participation in the Children’s Food and Beverage Advertising Initiative (CFBAI), the food industry’s self-regulatory program. While all people – children, teens, and adults – should be concerned with their health, children are most vulnerable because their bodies are still developing. Increasing evidence suggests that long term consumption of GMOs is harmful and that the escalated use of toxic synthetic pesticides in GMO agriculture is compounding the problem. These pesticides end up in Kellogg’s products.

The Kellogg Company states, “At Kellogg we believe that when you start with a great breakfast, great things can happen. That’s why we make foods that you and your family know, trust and enjoy.” After repeated attempts to get them to be transparent and cooperative on the issue of GMOs, we only got the cold shoulder. Meanwhile, Kellogg’s actively fights against transparency and has contributed nearly $2 million to propaganda campaigns to defeat citizens’ ballot initiatives to label GMOs in California, Washington, Oregon and Colorado. Their participation in Washington state was particularly appalling, having channeled money through a money laundering scheme concocted by the Grocery Manufacturers Association (GMA) which was determined to be illegal by Washington’s Attorney General.

In the United States, where there is no legal requirement to label genetically engineered foods and no definition of an allowable tolerance level of contamination, independent verification is of the utmost importance. For this reason, we demand that Kellogg’s not only remove GMOs but they must also obtain independent verification. We will not back down and we will not lift the boycott until Kellogg’s enrolls each and every product they make into the Non-GMO Project for verification. The Non-GMO Project uses the same contamination tolerance level of less than .9% (nine tenths of one percent) followed by the European Union.

To further clarify why independent verification is critical, the GMA, of which Kellogg’s is a member, is lobbying for federally mandated voluntary labeling. One of the many problems with the proposed standard is that it would allow for GMOs, which are processed to the point where the DNA may no longer be analyzable, to be labeled Non-GMO. This would allow oils which are produced from GMO crops such as canola and cotton, as well as refined sugar, processed starches, etc. to be labeled Non-GMO. While there may be no analyzable DNA, the fact remains that these ingredients are derived from crops which are herbicide tolerant and in many cases, pesticide producing. The increasing levels of chemicals associated with the failing GMO agricultural model will still be present in the final product. We believe that it is not only misleading and incorrect to label a food Non-GMO when it is made from a genetically engineered crop, but it is unethical.

Do the right thing, Kellogg’s: Remove GMOs and get Non-GMO Project Verified!