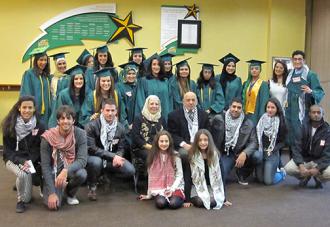 CLOSE TO 100 graduates, family members and guests walked out during George Mason University’s (GMU) winter graduation ceremony to protest the university’s entanglements with profiteers of Israeli apartheid. The walkout may have been the first instance of a university acknowledging and offering accommodations for a walkout of its own graduation ceremony.

This concession by the administration came after campaigns led by Students Against Israeli Apartheid (SAIA), a campus organization committed to the Palestinian boycott, divestment and sanctions (BDS) call.

The first was a campaign to boycott the sale of hummus made by the Sabra brand. Sabra is co-owned by the Strauss group, which supports the Israeli army’s Golani and Givati Brigades. These brigades have been charged with various human rights violations. For example, they were integral to Operation Cast Lead, Israel’s December 2008-January 2009 assault on Gaza that claimed the lives of at least 1,400 Palestinian civilians.

SAIA’s campaign to boycott Sabra hummus included several tabling events, handing out fliers and gathering more than 1,000 signatories for a petition to demand that the university cease to stock, offer and buy the Sabra family of products.

As a result of the campaign, the university now offers an alternative non-Israeli brand of hummus next to Sabra on the shelves. George Mason is the second University to offer a non-Israeli brand as an alternative. Additionally, Sodexo, the company that GMU contracts out to for all of its dining services, agreed to stop selling Sabra if the in-house brand outsells it, potentially making GMU the first university to completely remove Sabra from the shelves.

In November, the Israeli Student Association (ISA) and the pro-Israel (and misnamed) Committee for Accuracy in Middle East Reporting in America (CAMERA) invited Israel Defense Force (IDF) soldier Sgt. Benjamin Anthony from the organization Our Soldiers Speak to “whitewash” Israeli apartheid and the ethnic cleansing of Palestine.

To protest this blatant promotion of militarism and occupation, SAIA conducted a silent walkout. Almost half of those in attendance at the event participated in the walkout. SAIA also projected images of Israel’s occupation and the crimes of IDF soldiers on the side of the building as the event was going on. The walkout was part of SAIA’s strategy of exposing such “normalizing” events, including IDF propaganda tours disguised as educational forums.

LEADING UP to winter graduation, SAIA began its campaign to expose commencement speaker Shari Arison as an apartheid profiteer. Arison, who donated funds for a “Doing Good Values” professorship in the New Century College, was to be honored at the graduation ceremony with an Honorary Doctorate of Humane Letters.

Although the university claimed that the Arison group is committed to socially responsible ventures and values-based business practices, it makes a mockery of such claims. The Arison investment portfolio includes three companies that are directly involved in the illegal occupation and colonization of Palestine.

Bank Hapoalim, the largest bank in Israel, finances the expansion and construction of Israeli settlements. These settlements are illegal, according to United Nations resolutions and the Fourth Geneva Convention. Hapoalim has also been exposed for discriminating against Palestinian citizens of Israel, such as denying Palestinian requests to transfer their accounts to other banks while allowing Jewish customers to do so.

Another company in the Arison group’s portfolio is Shikun and Binui, which provides materials for the construction of checkpoints, builds Jewish-only highways and built a portion of the apartheid wall (which is also a violation of international law, according to the United Nations’ International Court of Justice). Lastly, the Arison group’s Salt of the Earth illegally extracts minerals from occupied territories.

Today, there’s a budding radical political culture on a campus that less than a year ago could be described as apolitical. It is in this context that the GMU administration offered to recognize a walkout of its own graduation and accommodations to those participating in it. Participants of the walkout were given the option of waiting in a reserved room while Arison spoke, and were allowed to re-enter the arena when the commencement speaker’s remarks concluded.

On the day of graduation, SAIA distributed 1,500 leaflets documenting Arison’s unethical investments and explaining why students would be walking out. As Arison stood up to speak, 24 graduates, many wearing “no honor in apartheid” stickers, proceeded to exit the main floor. Accompanying the graduates were up to 75 guests and family members who also walked out of the ceremony. While the students left in silence, family members and other guests could be heard denouncing Arison as they crossed the main floor and exited.

Omar Barghouti, one of the founders of the BDS movement, recently made the case that the BDS campaign against Israel is reaching a turning point. As one measure of this progress, Israeli Prime Minister Benjamin Netanyahu in June declared BDS a “strategic threat” to Israel’s regime of apartheid, colonization and occupation. For another, Israel’s “Brand Israel” campaign is failing.

Although small in comparison to other major BDS victories like the Presbyterian Church USA and the American Studies Association’s academic boycott of Israel, GMU’s Sabra campaign, the IDF walkout and the commencement walkout should be counted among the many smaller yet crucial victories for the BDS movement.