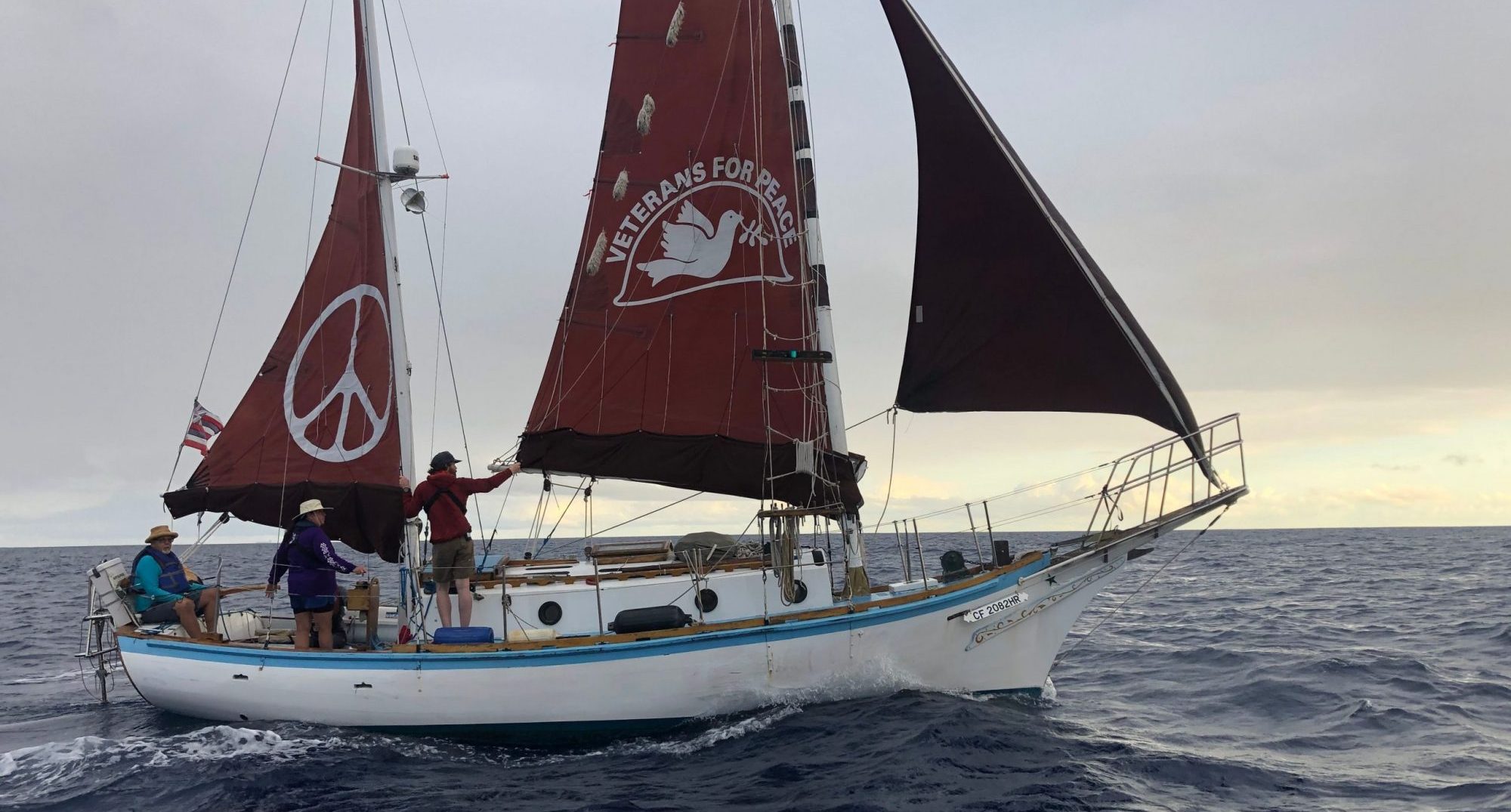 Historic Anti-Nuclear Sailboat Departs from Honolulu on Monday, May 3

A farewell ceremony for the Golden Rule and her crew will be held on Saturday, May 1, 4pm on the Ala Wai side of Magic Island, Honolulu.

After 21 months in the Hawaiian Islands, the historic anti-nuclear sailboat Golden Rule will depart from Honolulu, Hawai’i for the West Coast of the U.S.   The Golden Rule first sailed from California to Hawai’i 63 years ago, in 1958, on her way to interfere with U.S. atmospheric nuclear testing in the Marshall Islands, the site of 67 U.S. nuclear bomb blasts from 1952 to 1958.  Under orders from the Atomic Energy Commission, U.S. Coast Guard stopped the boat from leaving Honolulu. The arrest and jailing of the captain and 1958 crew garnered international media attention and increased opposition to nuclear testing and nuclear weapons.  Atmospheric nuclear testing was stopped by the U.S., the UK and the Soviet Union in 1963 with the signing of the Partial Test Ban Treaty.

While in Hawai’i, the Golden Rule team met with members of the Marshall Islands community who live in Hawaii and heard stories of the severe medical problems and forced relocation of residents of several islands that were blown up or severely contaminated with radiation from the U.S. nuclear tests.  Twenty-three nuclear tests were conducted by the U.S. on Bikini Atoll, and 44 on or near Enewetak Atoll.

The largest nuclear weapon ever detonated by the United States, the Castle BRAVO test on March 1, 1954, yielded 15 megatons and contaminated the inhabited atolls of Rongelap, Rongerik and Utirik with deadly radioactive fallout.

During the 21 months that the Golden Rule was in Hawai’i, project manager Helen Jaccard and others spoke in over 100 events in communities in all the Hawaiian Islands, except for Ni’ihau, concerning the dangers of nuclear weapons and the growing danger of nuclear war. With its red (tan bark) sails emblazoned with a large peace sign and the logo of Veterans For Peace, the Golden Rule has become a familiar sight to many in the Hawaiian islands.

“We are sailing for a nuclear-free world and a peaceful, sustainable future,” said Golden Rule Helen Jaccard.  “What better way to bring a message of peace and sustainability than this beautiful sailboat, which puts a smile on people’s faces!”

“We have made many friends in Hawaii, who have shown us how the Hawaiian Islands have been militarized by U.S. bases and continued bombing, causing devastating environmental damage and threatening native Hawaiian culture. This also must end,” said Helen Jaccard.

The Golden Rule and her crew will be at sea for approximately 30 days and nights, arriving in the San Francisco Bay around the first week in June.

In November 2021, five months after arriving in the San Francisco Bay area, the Golden Rule will embark again on another remarkable educational trip.  She will go on the “Great Loop” along the Gulf Coast, around Florida, up the East Coast, through the Great Lakes and down the rivers of middle of North America back down to the Gulf, stopping for events in dozens of communities along the route, many times in areas where U.S. nuclear weapons and nuclear power plants are located.

A farewell ceremony for the Golden Rule and her crew will be held on Saturday, May 1, 4pm on the Ala Wai side of Magic Island, Honolulu.